Good grief, tonight is Twelfth Night! I so intended to have all my posts done!  (And my book finished!  And … stuff.  Woops.)

However, in honor of the Lord of Misrule and all that, let’s see what I can accomplish.  I’ve Netflixed the BBC 12th, which for some reason I bought in VHS (!), and also the Supple one again because I shot it back so fast I didn’t take any screencaps.  I also do want to take another look at parts of the latter because, really, it can’t be as bad as I thought.  And I flat out don’t remember Feste.  Which is just weird.

In the meantime, here’s my take on one of my favorite productions.  As much as is possible, at least.

I saw this when it was first on PBS, and I loved it; I taped it, but I haven’t ever been able to find the tape.  (Unfortunately, I taped a lot of things, and therein lies the problem.)  There are bits and pieces on YouTube, and that’s all I’ve found so far – I’ll have to remember to put in a search for it on eBay now and then.  Never know.  Based on memory and what’s available, here’s L@LC.

I remembered the pools onstage, and the sexiness of it, and just enjoying the heck out of it – and based on the excerpts I’ve gotten my hands on the memories were accurate.  The setting was modernish, with minimal sets: gates (though no walls), paths and distant views, those pools, benches around the pools.  I thought it was an interesting choice to use pools when furniture is so minimal.  Also interesting: in hunting for Twelfth Night video and pictures I’ve found references to other productions (including one with John Lithgow as Malvolio – that I would have loved to see) which used pools.  I wouldn’t have thought that a natural progression of ideas.  But they are used very well indeed here; wet clothes are the next best thing to nudity (insert smiley face here).  Feste has some fun splashing through toward the end, and I’m fairly sure that Orsino has one of the obligatory bath scenes in one of them.   Best of all was Act II, scene iv: 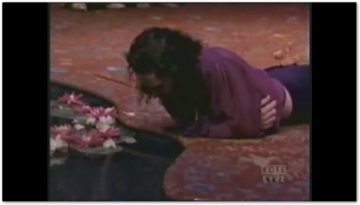 Orsino:
Come hither, boy: if ever thou shalt love,
In the sweet pangs of it remember me;
For such as I am all true lovers are,
Unstaid and skittish in all motions else,
Save in the constant image of the creature
That is beloved …

Wonderfully, Orsino rolls over onto his chest and stares into the water as he says those last words.  And then splashes the image away.  Brilliant.

The hedge scene is not one of those available, sadly, so I don’t know how they handled that.  My impression of the costuming by Catherine Zuber is a fusion of 1900-ish (in Sir Toby and Sir Andrew), the late 1700’s (the feel of Cesario and Sebastian feels 19th century to me), and, in Orsino’s costume and that of his court, Arabian Nights.  After a severe button shortage.  (Nigel Lythgoe has ruined me with all of his post-ballroom-routine comments about men having misplaced all their buttons.)

Like the clothing, Jeanine Tesori’s music is eclectic – a bit of many styles.  And it’s strong.  It is woven throughout rather than just in the scenes where Shakespeare said there was a song; the opening to Act III, which is Part I after the intermission, is a marvelously fun jam.  This production has I think my second favorite Feste (my second favorites in several roles, but I’ll come back to them): David Patrick Kelly has a wonderful look, and a wonderful voice.  The Fool should march to an irregular drumbeat no one else can hear, and Kelly makes him a 60’s Fool: he has turned on, tuned in, and dropped way out, man.  He has a separate wisdom, a sense and sensibility of humor that is Other – and that is exactly as it should be.  He was brilliantly cast, and and played it brilliantly.  I’d buy the CD if there was one.  (And PBS?  I’d buy the DVD if there was one…)

I love Helen Hunt as Viola/Cesario.  I have the feeling it’s unfashionable to love her, but that’s never stopped me before.  She’s fantastic.  She has lovely comic timing, and perfect reactions; she draws the audience into her befuddlement, and her facial expression and gesture broadens to fit the stage.  I do believe Helen Hunt is my second favorite Viola, a very close second to Katie Hartke’s.  And this set of twins is far and away the best.  I won’t count the set of twins both played by Joan Plowright – that just wasn’t right.  I would love to see more of Rick Stear’s performance as Sebastian; what there is of him is very nice, and when he comes together with his “sister” at the end it’s phenomenal.  There’s a little gag which I believe has been used elsewhere, but which was nice here, where Orsino reaches out to stroke his bride-to-be’s face and touches Sebastian’s instead.  Well played, and here almost believable.

Malvolio here (Philip Bosco) is Dignity, Always Dignity, coming down to upbraid the revelers in his nightcap and chain of office.  “Go, sir, rub your chain with crumbs” is perfect here – he’s ready for bed, but he’s either put his chain back on to come down and throw his weight around, or he’s never taken it off.  I can’t decide which I prefer.  His final scene is the only one of the L@LC ones I can watch that really gives me qualms (apart from all of Olivia’s); he emerges from his captivity battered and tattered, missing his glasses – and bloody.  The blood bothers me – it has no place there.  It’s hard enough to keep the froth bubbly with his fury and humiliation; when he emerges with blood under his ear, the bubbles deflate much faster.

Sirs Toby and Andrew are a wonderful pair here.  Brian Murray is Toby – a familiar face – and 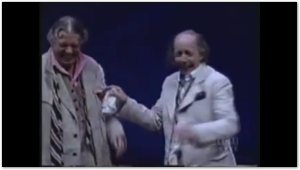 Max Wright is Andrew – even more familiar: he was, among many other roles, Mr. Tanner from ALF.  This Toby has a morose edge to him, breaking down during “O mistress mine”.  He’s a depressed drunk (and very much a drunk), and with what I have to go by it seems like as he’s leading Sir Andrew around he will in turn be led by Maria – she’s hard as nails.  I want so badly to say Max Wright’s Sir Andrew, with his magnificently whiny voice and forlorn aspect, is my favorite, but I just can’t. 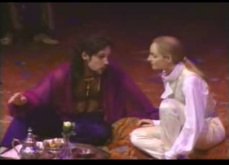 Paul Rudd’s Orsino is … well, really.  This is one of the productions where my response to “she fell in love with him in three days or less?” is “sure”.  He is the sexiest Orsino, even taking into account the insanely tight tights in the ATV (largely canceled out by the Dutch Boy hair).  But that isn’t part of his self-centeredness; my impression is that he dresses that way because he can dress any way he pleases, and this pleases him; if it also happens to accentuate his positives, he pays little attention.  He is very much enamored of himself, as witness the scene with the pool, but it’s his passion he is wallowing in.  He is wringing every drop out of

Being In Love, and, more, having his love go Unrequited.  He is miserable, and making the most of it.  But there’s a human being in there amid all the angst and emo; the “died thy sister of her love, boy?” scene reaches him through his own pain, which while theatric is still pain.  He just needs to do some growing up, hopefully.  There are some productions where I worry for poor Viola, marrying an overgrown, overly emotional yet emotionally shallow boy full of hot air.  Here I think he’ll turn out all right.  It isn’t a great performance, but it is a good performance, and Paul Rudd provides an Orsino that doesn’t make me question Viola’s sanity.

Not so positive is Kyra Sedgwick.  Well, I will start with what positive there is: she looks glorious.  As I can accept Viola falling very quickly for this Orsino, I can see Orsino clinging to his love for this Olivia.  She is scornful in her black, and when her infatuation catches fire she bursts onstage in a spring pink dress, all rose and flowing curls and parasol.  She looks marvelous.  But.  When she is onstage there is not a stick of scenery left unmasticated.  She overdoes everything – every gesture, every facial expression, every line, every step across the stage.  She flounces and stamps and cavorts and swirls her skirts.  She doesn’t frown – she scowls.  She doesn’t smile – she grins.  There’s broad emoting for stage, and then there’s massive overacting.  Particularly playing against Helen Hunt, who is, despite broad expressions and reactions, still a natural actress, playing what feels like a comparatively realistic character, Sedgwick comes across as a caricature.  Pity. 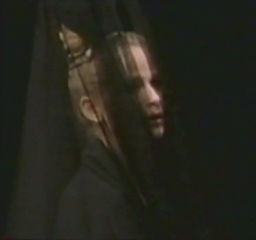 Again, I’m hoping to get hold of the whole production; maybe I’ll do another hunt (so to speak) through the many many videotapes I still have dragging around.  If I strike it lucky, I will update.  Who knows?  Maybe PBS will be kind and release a dvd.  Maybe?  I really, really enjoyed most of what I saw, and I’d love to fill in the blanks.