Anne of Avonlea — and not (episode 4) 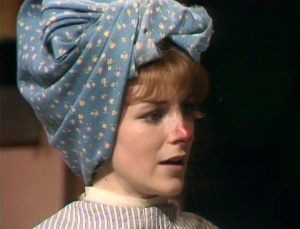 I was going to go on as usual and write a post about the remainder of the BBC Anne of Avonlea, but … there’s too much.  (I don’t even have the heart to make that a Princess Bride reference.)  My usual posts are ridiculously long, and this would have been a tome. So I’ll break it up. I’m actually a little angry about this, so this is going to be fun.

What, exactly, happens to people when they try to adapt the Anne books to the screen? Is there some buried trigger in the work, some booby-trap that is sprung when someone says “I think I’ll make a screenplay of that”, causing some drastic change to their brain chemistry? I’ve gone on at length about Kevin Sullivan, and won’t go there again – the post is here – except to say that Anne of Green Gables was beautiful. Go rent it.  Seriously, it’s wonderful.  Just stop there – really, do.  Because then Sullivan lost his mind – it’s as though he took all the words to all the books after Green Gables, put them in a big vat, and stuck an immersion blender into the thing.  It started out as a disruption to the space-time continuum of Avonlea – people disappeared, other people spoke their words, time compressed in one place and expanded in another.  But it wasn’t so bad at first.  And then someone must have killed a butterfly in one of those space-time hiccups, because it all went kaflooey.

The BBC version is in six parts; I talked about the first half over here, and while there were redeeming qualities, the detractions were many and hard to get over. Still, I hate leaving something unfinished… and I really do like Nicholas Lyndhurst’s Davy and Barbara Hamilton’s Marilla. And I wanted to see how they handled the rest. I want to see Patty’s Place and Phil and Gog and Magog as they move on to Anne of the Island.

Don’t do it. Seriously. Watch the first three episodes if you’re in a forgiving mood, the first disc, but if you care at all about Anne – or Miss Lavendar – don’t do this to yourself. I think this might actually be worse than the Sullivan travesty; that left my Miss Lavendar out entirely. Maybe watch the last two episodes – but not #4, and – seriously – turn off the last episode when Anne is standing at the window. Trust me on this.

They polish off Anne of Avonlea in episode four, pretty much. Oh, look, there’s Paul’s father – and – he … looks familiar. He looks like … Oh. You know those Worlds Collide moments I talk about, especially with BBC programs? Stephen Irving is played by Anthony Ainley. Anthony Ainley, who has been in my consciousness for more years than I care to think about as the Master on Doctor Who … He was the third to play the role, though he was the first one I encountered, and like his liveslong adversary the Doctor,

your first is the one who means the most to you… He killed Nyssa’s father. He was, in all seriousness, one of my early influences to help define what evil is.

And here he is playing Paul Irving’s father. Oh my stars and garters.

I’ll come back to that. Miss Lavendar is getting a post all to herself. 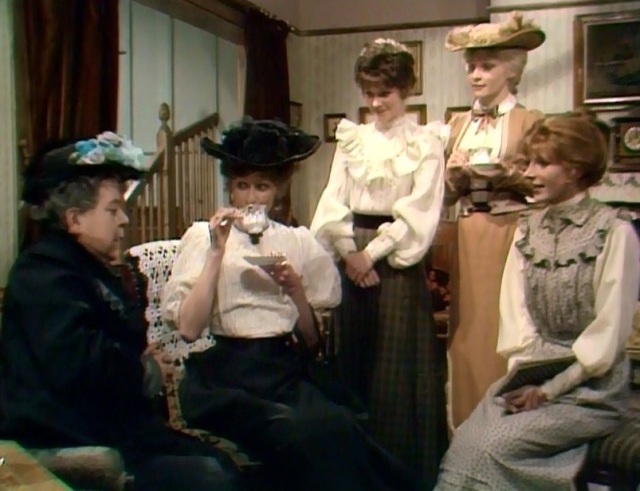 There are good things in the mini-series, even a few which are not of the book: Mrs. Morgan was lovely. I liked the line “They must think I’m ravin’ mad or a secret drinker!” I still love Davy, and Marilla. They have some scenes, particularly together, which are not LMM, and which still work nicely.  Some full transcriptions are on the TV Quotes Page, so as to try to keep this a little shorter, but:  Davy asks Marilla why she never married, and tells her Milty Boulter’s pa said men were crazy to have left her on the shelf. Marilla’s reply, especially in the astringent tone of voice Barbara Hamilton excels at, is beautiful: “Did he by any chance mention the nature of this mass insanity among menfolk that has resulted in me being left on the shelf?” It’s actually an impressive scene. The upshot is that Davy wants a piece of plum cake. He also really does want to know why Marilla’s not married, but he figures he can talk his way into a piece of that plum cake… The whole scene uses the passage from the book – here, and scroll down to L.M. Montgomery – up to and including the chickens, uses it to its own ends, and does a nice job.

So, good on ’em for that; I am actually quite fond of that scene, and one or two others.  But.

The affair of the willow pattern plate was turned into something bizarre involving Charlie Sloane and, of all people, Mrs. Blewitt, who began casting aspersions on Anne’s character because she’s an orphan.  Paul Irving is brought in again to have tea with Miss Lavendar – and is made to look even worse than before.  This is a child who a) did not come from America, b) is frequently beaten up in school, and c) is in big trouble when he sees his father again.  I think I’ll have to have a Paul post as well.

The scene of Anne’s First Proposal was a jagged, ill-fitting combination of good and bad.  Of course, it’s placed entirely wrong; here it’s in the midst of the Anne of Avonlea content, when it didn’t actually happen till Chapter 8 of Anne of the Island.  And of course it wasn’t supposed to be Ruby Gillis bringing her brother Billy over to … ew.  What they were alluding to, I suppose, was in a way better and in a way worse for Anne than what they produced here; it was supposed to be Jane proposing on behalf of her brother Billy while staying the night at Green Gables.  This had its humor – Billy: “You were real loony!  Real loony!!”  Anne: “I still am.  I’m not normal at all.” – and her reaction to his trying to kiss her, but it was creepy – “Show her the whip!  That’ll calm her!” and … well:

“When you first come here I used to spy on you … when you weren’t lookin’.  I used to hide behind your hut. [hut??] You useta lean outa the window and talk to the tree there.”

“Ew” doesn’t quite cover it.  This one little speech bothers me almost as much as the massive character violations elsewhere in the series, because I know Anne.  Being told … that … knowing that this oily, earthbound creature was sneaking about and covertly watching her – and simultaneously mocking her and, I suppose, in his own nasty way, admiring her – would retroactively taint all of the beautiful moments of her childhood, and her communions with the Snow Queen; it would have destroyed something beautiful.  It’s another reason I question the sanity of the screenwriter here.   What a terrible thing to do to Anne.

One odd thing which may have been part of the book but wasn’t as obvious was the benefits arising from deaths.  Davy and Dora’s uncle dies, and that means that Anne and Marilla can keep them, to the joy of all.  Thomas Lynde dies, and that sends Rachel to live at Green Gables and allows Anne to go to college – to the joy of all.  It’s … I used “creepy” already, didn’t I?

I need to compare the book and the film in regards to another scene, and – well, let’s see if you can spot the difference.

There was more romance in the world than that which had fallen to the share of the middle-aged lovers of the stone house. Anne stumbled suddenly on it one evening when she went over to Orchard Slope by the wood cut and came out into the Barry garden. Diana Barry and Fred Wright were standing together under the big willow. Diana was leaning against the gray trunk, her lashes cast down on very crimson cheeks. One hand was held by Fred, who stood with his face bent toward her, stammering something in low earnest tones. There were no other people in the world except their two selves at that magic moment; so neither of them saw Anne, who, after one dazed glance of comprehension, turned and sped noiselessly back through the spruce wood, never stopping till she gained her own gable room, where she sat breathlessly down by her window and tried to collect her scattered wits.

“Diana and Fred are in love with each other,” she gasped. “Oh, it does seem so … so … so hopelessly grown up.”

… Diana came to Green Gables the next evening, a pensive, shy young lady, and told Anne the whole story in the dusky seclusion of the east gable. Both girls cried and kissed and laughed.

Having been apprised of Diana’s engagement in a set of scenes presented like a bad attempt at madcap comedy, filled with interruptions, and during which she managed to mortally offend Diana by saying aloud worse than what Book Anne privately thought in her weaker moments and would have died before saying (and which was foolish in several ways – as if Anne would not have seen her ring immediately), Anne is strolling, carefree, through the woods when she comes to a scene the viewer has already been treated to: by a lake (Barry’s Pond? Never the Lake of Shining Waters) Diana and Fred are lying together among the ferns, kissing. The actual dialogue: 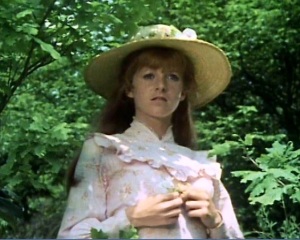 I want to pull one word in particular out of each scene description, one word which makes all the difference in the world:
Book: standing together
BBC: lying together

Never, never, ever, to save their immortal souls, would any main character of LMM be found lying in the woods (or anywhere else) making out. Ever. To paraphrase Amanda in Lost in Austen: “Hear that sound, George? ‘Lurrgh’? That’s Lucy Maude Montgomery spinning in her grave like a cat in a tumble dryer.” I came within half an inch of walking out of STV because of extreme character violations. This … this would have had the same effect in a theatre. This is not only character violation, put together with the Miss Lavendar/Stephen Irving scene (which I’ll come back to) and what they did to Gilbert (ditto) it goes against just about everything the books are about.

My frequent refrain with adaptations is “I understand why changes must be made to the original material, but”.  In this case, I understand why some of the changes were made; if I dug into it I might be able to make sense of the messing about of the timeline, which after all doesn’t trouble me too much.  It doesn’t hurt the characters, and the characters are the most important aspect of L.M. Montgomery’s books.  The reason the books have remained known and loved for over a century is that there is a sweetness to them which is easily mocked, easily sullied, and hard to capture; I can’t compare with LMM in descriptive language, but here’s my attempt: there is a gentleness in the books, coupled with an intelligent, clear-sighted humor, occasionally self-deprecating but never mocking.

With the Kevin Sullivan version I was angry because he treated the first book with great respect, and then decided he could do so very much better than the rest of the series and changed everything. I think this is actually, bizarrely worse: they kept the plot details much as they are in the book (though not necessarily in the right order), but they put a spin, an inflection on everything – everything – that reminds me of Mordor’s influence on Middle-earth.

2 Responses to Anne of Avonlea — and not (episode 4)