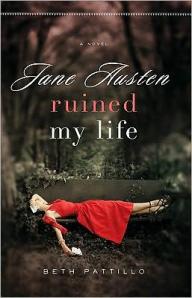 Pre-judgements on books are always iffy. Without some kind of pre-judgement, without the weighing of cover art and blurb, opening a book cover would be like opening an unlabeled can: will it be beans, or cherry pie filling, or one of those gag snakes-on-springs things?  But so often the data available on the outside of the book sets up the wrong expectations (or gives away too much of a mystery, but that’s another rant)…

I thought, based on the cute title and the cover photograph of a swooning woman and not much else, that Beth Pattilo’s Jane Austen Ruined My Life was going to be sheerest chick lit.  A fluffy, funny, maybe occasionally biting romance novel.  (Something can be both fluffy and funny and bite – I have been chewed on by many’s the puppy.)

It started out that way.  It started out fulfilling my expectations as fluff. Here is Emma Grant (speaking of Wrong Cover Blurbs – she’s named as Emma Douglas on the back cover, though that may or may not be Edward’s name?) on her way to England, leaving the ruins of her life smoking behind her.  She discovered her husband in flagrante delicto, and her career as a professor at a prestigious university has been destroyed by a baseless claim of plagiarism.  Now, unemployed and financed only by judicious sellings-off, she is flying across the Atlantic on the basis of some mysterious correspondence to get her hands on the letters of Jane Austen – long supposed to have been, at Jane’s request, destroyed. With these letters she can “get back at” Jane Austen – Jane, who valued her privacy above all and wanted her letters never to be public; Jane, whose every book ended in a Happily Ever After which Emma has found resembles real life not at all. Jane, whose effect on a girl 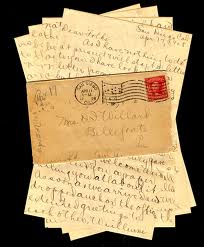 named Emma was to make her look for and expect her Mr. Knightley. It’s all her fault, and exposing her letters to the public will not only be vengeance, but it will also most satisfactorily restore (and launch into the stratosphere) Emma’s career.  Win-win, with Jane’s laundry, hopefully dirty, hung out for all to see.  Revenge.

I knew a little about Jane Austen’s life from whichever movie that was that I saw (not that one, the other one), and from general reading, but this did a lovely job of pointing up a few parallels (concrete and apocryphal) between her life and her work.  Her situation when her father retired – and then when he died – is very like the Dashwoods’ in the same position, except that Jane’s brothers were kinder (not much more able to provide, but kinder).  There is the fictional parallel between Jack Smith and Harriet Smith, and between Lt. Jack Smith and Captain Frederick Wentworth – how poignant to have Jane rewriting her life as it might have been, and for her sister Cassandra to take the place of Lady Russell.  The sisters adored each other in reality, but it’s a fascinating idea

that Jane’s portrayal of Lady Russsell, that scheming arrogant bitch, was a way to vent her emotions … Of course, what I just said is the best argument against any such thing, as the family knew the books as well as Jane did, and Jane would not have written to hurt any of them.  The only problem with the parallels drawn in the book is that I was saying “Anne” and “Persuasion” chapters and chapters before Emma – and she should have said it long before me.

A more valid parallel is “Jane Austen fainted when they told her they were moving” from their beloved home to Bath: this reminded me of Anne, when because of her father’s insolvency they had to pack up and leave.  Anne and Jane were both also at the beck and call of their siblings, though where Anne was cosseting her hypochondriac sister, Jane (and Cassandra) were in demand and happy to oblige assisting their beloved siblings with their large broods.

As I said, it started out as fluff, and in fact I was cynically prepared to take umbrage on Jane’s behalf … Somewhere along the line, though, as Emma made her way through a series of tasks set by the letters’ guardian; as she – to her surprise, if no one else’s – reconnected with her old best friend, long out of touch, who happened to be male and also happened to be a highly attractive English professor; as she became occupied by something other than her own misery … Somewhere in there it stopped being fluff and became the story of a woman in pain, starting to recover and remember why she’s always loved the things she’s loved. Like Jane Austen.  I admit it: I welled up at the end, for Jane, and for Emma.  And for other reasons.  The ending probably was not to a lot of readers’ tastes – but I thought it was perfect.  This is smart and funny and steeped in Austenism (if not entirely reliable as a reference, I believe), and really very human.