I hate starting in the middle of a series. I’m usually pretty compulsive about it – if I haven’t read book one, I won’t read any of it. But sometimes I will put my name in for something on the LibraryThing Early Reviewers page, wherever the book falls in its series – kind of on the assumption that I’m not going to get it. (Oddly, I’ve put my name in for literally scores of giveaways on Goodreads, and won one. On LibraryThing, I think I’ve won well over a dozen – and great stuff. Supposedly GR has a larger membership; maybe that has something to do with it – but then again I know of several people who have had many wins. Huh.) 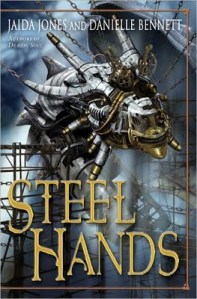 From the May batch of early reviewers I received Steelhands, by Jaida Jones and Danielle Bennett – “Havemercy #4″. Feeling my duty to get the read and review done before the anticipated release date in August, I squared my shoulders and plunged in.

The two ladies who wrote this should give lessons to all writers, fantasy and otherwise, who write more than one book in the same world. All of them. I don’t remember ever reading another book which handled the problem of InfoDump in such a skilful manner: I always knew exactly what I needed to know, when I needed to know it – no less, but also no more, or not much more, so I’m left with the deep need to read the other books. Soon.

The story is told in a revolving first person point of view, moving fluidly from ex–Chief Sergeant of the Dragon Corps to his old comrade Balfour to (from Goodreads via randomhouse.com) “Laurence, a feisty young woman whose father raised her to be the son he never had, and Toverre, her fiancé, a brilliant if neurotic dandy who would sooner share his wife-to-be’s clothes than her bed”. That’s pretty good. They’re terrific characters, and each has his own voice which is identifiable and unique from the others, in small ways and large. I’ve read reviews of other books which don’t like alternating first-person narrations; this is not for them (though I wish they’d give it a try). I do (I’ve actually started a book using the technique), and I loved this.

The story: the war which I believe occupied the first three books of the series is over. The magical and mechanical – steampunk, really – dragons with which an elite corps of riders helped win said war have been dismantled, and the surviving riders are in the awkward position of living hero. Adamo, former Chief Sergeant, has – reluctantly – taken a position as an instructor, and Toverre and Laure are two of the young people who are taking advantage of the new offer of free education stretched out to country folk.

But something odd is going on among the students – and with Balfour, now in diplomacy, who is having difficulty with the steel hands the magicians have created for him to replace those he lost in the war. These hands are a new technology of a similar nature to the dragons, and need maintenance from a magician … and his particular magician vanishes. Meanwhile, Adamo and Luvander have had a letter indicating that someone was trying to rebuild – resurrect – one of the dragons. Which can’t be good.

Steelhands was beautifully written – original, and wonderfully imagined and thought through. I’ve read very little steampunk so far, but this is exactly what I hoped for and wanted from the genre. The characters were not necessarily all people I’d want to go out to dinner with (most of them not, I think), but I loved spending page-time with them, and I look forward to meeting many of them again. They were all of them excellent companions on the page.

I’ve discovered a reason to plunge in in the middle of a series: it’s lovely that there are more books in a current series already in existence – I don’t have to wait for their publication. My birthday’s coming up …

Like Loading...
This entry was posted in books, fantasy and tagged Book, Danielle Bennett, Jaida Jones, Steelhands. Bookmark the permalink.