This was a Member Giveaway on LibraryThing, in ebook form – thank you!

The basic storyline: Kurt was a cop, specializing in undercover work, until he burned out on the deceit and absence of trust and the danger. His new life is as a trainer of racehorses, some of which are his. Then his old boss calls asking – begging – him to come back for one more case: Kurt’s old partner, who was just murdered in circumstances involving the racetrack. Reluctantly, he takes a couple of horses and heads to Calgary to look into it. 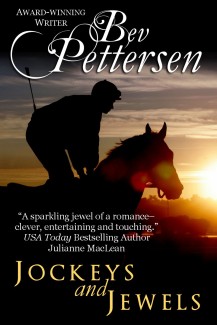 One of the “people of interest” in the case is an apprentice jockey, Julie: cute, of course, blonde, of course, and adorable. Dimples. It takes Kurt about four minutes to eliminate her from suspicion – she was the last apart from the murderer to see his ex-partner alive, and that’s it. Her adorableness has nothing whatsoever to do with it, of course.

What it says on the tin for this one is: mystery/romance set in the racing world. And it hits all of those elements pretty equally.  Kurt is looking for the reason the dead cop, Connor, was investigating the track’s stables, why he was murdered, as well as who did it. Naturally enough, he finds himself irresistibly attracted to Julie, and vice versa. And the book is placed in a detailed racing setting. Unfortunately, I think it fell a little bit short on all three components.

The mystery was not terribly successful, to my mind. Kurt has a total of one real suspect once he’s ruled out Julie, a horse-abusing short-tempered bully called Otto. Not to spoil anything, but what are the odds he’s guilty? Karma is big here.  The idea is that Connor helped Otto with a flat tire and saw something that raised his antennae, and looking into that was what got him killed. Is Otto using the horses to smuggle something? Drugs? Wait, what was the title of the book again? Yeah. Having a hugely massive spoiler in the title is just unfortunate.

Which is in addition to the fact that I find the title rather unfortunate for itself. Alliteration for alliteration’s sake – spoiler or not – is not a positive.

The romance is … quick. It begins with Julie distracted in nearly every other paragraph by how attractive Kurt is, and Kurt being distracted in nearly every other other paragraph by Julie’s cheekbones. And it runs fairly predictably from there, and features the least romantic love scenes I have ever read, not that I’m a connoisseur. Kurt is mildly Neanderthal, and it’s always from his point of view. And – not that this is necessarily a complaint, but it is odd – there is not much mention of anything below the waist. It almost seemed as if the author was uncomfortable with writing that part.

The writing, speaking of which, is well done, apart from some questionable punctuation and a considerable amount of head-hopping. This is something I’ve been guilty of, something which lots of books – older books especially – do, and which is generally frowned on now. This is an excellent example of why. There were some passages where point of view switches from one sentence to the next, and it’s flat out confusing.

I’ve loved horses as long as I’ve loved anything, and I enjoy books set in their worlds. It’s been a long time since I’ve read one, actually, possibly since the young adult horse books I used to revel in. Here there is no doubt that Bev Petterson knows what she’s talking about; she talks the talk with authority.  She Gets It Right according to the strictures of Judith Tarr.  The danger of racing is emphasized, which is a great choice to make – although it does also emphasize the fact that Julie’s a young woman.  I have two problems with the horse-world aspect, and they are both a little surprising to me. First is that in a book filled with horses, only one really becomes a character in the story. The rest are just creatures that eat and buck and run, lacking personality.

The other thing I didn’t like about the setting was the use of jargon. The author avoided the classic “As you know, Sarah” fault, so common in CSI, which involves one character telling another something they both should know as well as they know the alphabet, but which the audience needs explained (“Ah – look: petechial hemorrhaging – the blood vessels in the eyes have ruptured, indicating asphyxiation”) … The problem is that the way she avoids this is to not explain half of the jargon. The best way to clue a reader in is to engineer the context. This doesn’t happen here, over and over. I didn’t have any idea what a claims race is, and I still don’t, really; there was frequent mention of tack and equipment with which I was completely unfamiliar, and I have to say: if I don’t know what it is after a lifetime of reading about horses, then I can only imagine a complete newcomer to the environs would be baffled by it plus a lot more.

I can’t say I cared about anyone in the story; some of the minor characters were enjoyable, but the main focus was on people I couldn’t drum up much interest in. Kurt’s lack of finesse as a lover (in the old-fashioned use of “lover” as well as that more commonly used now) is off-putting, and Julie – a driven, ambitious apprentice jockey who wants to ride more than anything else – just made me angry as she proceeded to get comprehensively drunk the night before her first big race. The stupidity blew my mind. “Kurt stepped from Lazer’s stall, his expression inscrutable, and the butterflies in her stomach morphed into giant moths. Was he disgusted with her drinking last night?” If he wasn’t, I was.

It was a quick read, and mostly enjoyable; it could have been better.