This is one of those ideas that Should Not Work. It should foment outrage in the heart of even the mildest Sherlockophile that Laurie R. King should choose to bring a retired Sherlock Holmes together with a young woman, even as his apprentice, much less more.

Pastiche, fan-fiction, homage; there is a lot of debate (if you know where to look) about what it is and what to call it, and it has – especially under the banner “fan-fiction” – earned a reputation for sheer and utter execrableness. It is so often a terrible, terrible idea for a writer to co-opt someone else’s characters and use them to their own purposes, offensive both to other fans of the characters and to the writer, or the memory of the writer. But I have read fan-fic that glowed with pitch-perfect characterizations, which either echoed the original author’s style beautifully or married the writer’s own voice to the material without a ripple. Barbara Hambly wrote Star Trek novels – that’s how I found her – and a couple of Beauty and the Beast novels, and they are splendid. That’s why people read it – or at least, that’s why I read it, and that’s why people write it – or at least why I’ve written the handful of LotR things I’ve done: for the deep, warm satisfaction it gives to read something new about dearly loved characters from a different angle, to make somewhat real imaginings about what happened in the gaps the original writer left, to use the knowledge of a beloved writer’s work to speculate about what would have happened if – ? I remember a LotR fan-fic about Éomer and Éowyn and Théodred, coping with the deterioration of Théoden – and, for her, coping with the increasing power and ubiquity of Wormtongue. It was powerful, and simultaneously shone a light on the characters I knew and gave voice to a character we never meet in LotR. It 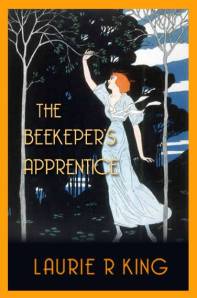 can be good. It can be great. Unfortunately, it’s more often so very, very wrong-headed and bad. So very bad. Badly written, badly conceived, ill-interpreted products of sometimes warped imaginations … fan-fic, like self-pub, is a sphere which must be explored very carefully, and with protective gear: eye protection, heavy (preferably chain mail) gloves, and a bottle of brain bleach nearby. Just in case. What is seen cannot be unseen, unfortunately.

A synonym Word coughs up for “pastiche” is “appropriation”. That works. I like it.

Laurie R. King’s appropriation of the Holmes universe ranks very high among the Good Stuff. This isn’t merely the expression of a desire to play in someone else’s sandbox. This is homage, a knowledgeable and loving – and respectful, that’s key – extension of what Conan Doyle wrote. It is a logical continuation to show Holmes retired among his bees in Sussex, and going spare with the boredom. The introduction of a non-canon character frequently results in a Mary Sue, and Mary Russell comes perilously close at times – but she has a three-dimensionality and humor that lets her escape that label. It could have been bloody terrible, the idea of Holmes taking a teenaged girl under his wing – and into his heart. Mary Russell’s middle name is not Sue, however, and this Holmes is in need of a diversion – how badly in need we don’t really see till “Beekeeping for Beginners” – and Laurie R. King is firmly in control of the situation. I still remember being a little shame-faced at buying the first books, and approaching them with caution. I very soon

learned that LRK is one of those writers who consistently allows a reader to relax and enjoy a book without concern. “Reliable” is a lukewarm word of praise, but it is an adjective for a quality of great price in a writer. Laurie R. King is reliable.

The LRK Holmes is neither worshiped nor turned into a parody. This series digs down into the canon and its conceits to build a depiction of a real, if extraordinary, man called Sherlock Holmes. His exploits have been turned into potboilers of which he disapproves by his erstwhile partner/assistant (depending) John Watson, and promulgated to the masses by Watson’s agent Doyle. Where old friendship spares Watson most of Holmes’s contempt at the style, content, and distribution of the stories, Doyle in this universe is not spared; Holmes hates him – and in the context of this universe, he ought to. He has to. It’s a slightly brain-wrenching existential situation in 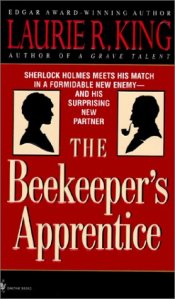 which the fictional character would purely loathe the stories and books which gave him life – and truly would have the utmost scorn for his lurid-penned, fairy-seeing, ghost-seeking creator. I mentioned respect earlier; perhaps most of the Holmes-and-Russell books’ respect centers on the creations of Sir Arthur Conan Doyle while the author himself is granted little. But it isn’t LRK who despises him – it is his own creation, and in an odd way it’s a great compliment to Doyle that his creation has become independent enough to hate him.

The evolution of the relationship between Holmes and Mary is given a good and solid launching in this first book in a kidnapping story that resonates with the original stories. Before the story is half over their partnership is being given a test that would shatter a lesser partnership. This is a firm foundation for the series, with a beautiful “and then there was another adventure in there which you’ll be told about in due course because you don’t need to know just now” that is somehow very 19th /early 20th century. After an extended period in Holmes’s august company, Mary Russell removes to Oxford, and sees him much less frequently. I enjoyed watching Mary expand to fill her space, the glimpses of her academic life and the hijinks that followed her. She is not merely another of Holmes’s

appendages; she is Mary Russell, whose interests overlap with but are not identical to her partner’s, who can do rather well on her own separate from Holmes, does so at need, but would prefer not to.

To be honest, I’ve never had the deep attachment to the Doyle stories that many mystery geeks do; I don’t think I’ve even read all of them, or not more than once. I’m not an Irregular. But, still, Holmes is an old friend, and I am as protective of him as I am of the Enterprise crew or the Baggins clan, or even of Jane Austen. Which is why reading appropriations by someone who is, I believe, even more protective of and certainly more knowledgeable about him is such a joy. It’s a marvelous thing to have negative expectations completely upended.