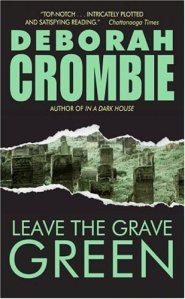 I don’t know what made me think Leave the Grave Green was the first book in the Kincaid/James series. (I also thought it was a different series, which is just silly.) It isn’t the first book, but the third; but it was a fine place to start, even for someone like me who twitches a little starting in the middle of a series.

The story: the son-in-law of a famous retired opera singer and her equally celebrated conductor husband is found dead in a country river, and because of the status of the dead man’s in-laws Scotland Yard, in the persons of Duncan Kincaid and Gemma James, are called in. They discover that the dead man’s widow, an artist with an interesting slant on life, had not lived with him for quite a while. She had moved back with her parents, and he was living in the house she had bought, and yet he was in the habit of visiting with her parents every week. The relationships are bizarre – he seemed closer to her parents than she is, and the in-laws seem more upset by his death than the widow – and that’s emphasized when the story comes out about her little brother. He died when they were children, in much the same manner as her husband has. 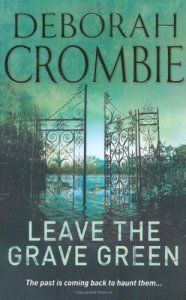 For some reason I had a hard time becoming comfortable with the partnership of Kincaid and James. I rather like them as characters; I’m fairly well accustomed to British police procedurals, so I don’t think that was it. For some reason there was a disconnect between Kincaid and James, or between the pair of them and me. It’s a different sort of partnership, at least among mysteries I’m familiar with: Kincaid is, while not peerage, upper class, while James is … not; she is in the throes of divorce and has a small son, while he is divorced long since.

Their relationship changes in this novel, and that was at the same time the most interesting part of the story and also the most disturbing, given Kincaid’s proclivities. Which is in a way indicative of the pacing and level of intensity of the murder mystery aspect of the book. It’s not a thrill-a-minute chase through London; I’ve seen the tone compared to that of the cozy subgenre, which is very odd considering the seriousness with which it takes the murder. In a way there is a laid back feel, the cast of characters calmly exploring the family and professional relationships that surrounded the victim, composedly shuttling back and forth to London for interviews, coolly

entering into something slightly more than a one night stand, and then perhaps another. Gemma James is the only person I remember as being rattled by anything.

I liked the book. I don’t know why I had been collecting the series when I saw them. I’ll continue to do so, but I wasn’t compelled to rush out and make sure I have a copy of every other book featuring Kincaid and James. But I did like it.