Reading Emily of New Moon I began to have an idea of why I’ve never loved and spent time with Emily Byrd Starr as I have with Anne Shirley or Pat Gardiner. I began to suss it out then, but I loved the book and it still seemed strange to me. With Emily Climbs it began to seem clearer – that dark streak running through it, I said, and left it at that. But it is only on finishing Emily’s Quest that I fully understand – and that is partly because I know, on closing this book, I will be leaving it closed for possibly another twenty years. Whether I have the moral courage to read it then will be interesting to see – almost like Emily’s fortitude in reading her letter from her fourteen-year-old self to herself at twenty-four, except unlike the very young Emily I know the pain within the pages aimed twenty years ahead.

There is pain in the other books, deep and seemingly impassible, and I always cry over the other books (Matthew…). I recognize myself in Valancy, heaven knows, and Anne and Pat, and so their pain is very real to me. But it is their pain. The pain that laces through Emily is personal. I have never read L.M. Montgomery’s journals or memoirs or letters, so I don’t know if my reading is true, but it feels as though a great deal of Emily comes from Lucy Maude. I find it hard to believe, for one thing, that the snippets of reviews Emily reads to her

staunchly supportive family aren’t true to life. My feeling is that while the specifics of the circumstances of the years spanned in Quest are wholly fictional, wholly Emily’s own, the emotions are not in the least fictional. Fictionalized.

After decades loving Anne and Pat and Valancy, still I can’t help but identify most strongly of all with Emily – and it is the Emily in this book that brings me to tears. Alone, and left alone, and in no small way responsible for that aloneness, but knowing that there was no other action or set of actions that would have ever been tolerable in any given situation. “I have not heard even from Ilse for a long time. She has forgotten me, too.” I know that feeling well. That was the feeling – of having been forgotten in general, compounded with actually 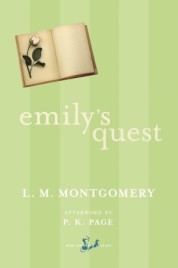 being told by someone I held dear that he had forgotten about me, that caused me to – as someone wise recently said – be still and lock the gate from the inside. I walked away then and made some decisions and will hold to them. My locks might get a bit rusty.

Facing the daily struggle against the inner demon editor who insists that every word written is trash, or worse, that no one will read this nonsense, that … well. She was, obviously, far more successful in ignoring or silencing that voice than I ever have been, or, at times, ever hope to be. It’s funny, though, and I apologize for a spoiler, but even Emily’s greatest literary triumph to date was painful to me; I haven’t finished a book, much less had it rejected by uncounted publishers, but I know that if I did, and gave up as Emily does, there is no Uncle Jimmy figure in my life to pull it out of storage and send it out again.

So I wonder, in a way, that I didn’t love these books more when I was the age

of Emily (book two). An artist of extraordinary talent, when I wanted to be, planned to be an artist; a writer heroine, when I already was scribbling a little here and there; hard

work leading to success and happiness. It should all have appealed, then. Now … the pain is too real, and the abruptly happy ending not as easy to swallow. It’s a beautiful book, and a beautiful trilogy … but not for the young and hopeful, or the … what? Not-so-young and futile-feeling. Perhaps it’s for those who have been through the pain and persevered better than I have. For me? I think Emily is going to go into a box, and the box is going to be set at the back of a shelf, and the dust will collect on it, and – no. I won’t even express the hope that one day I’ll read them again without the ache. On the shelf they’ll stay.

My review of Emily Climbs