Beyond the Misty Shore – Vicki Hinze 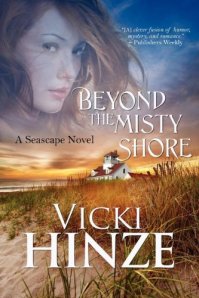 I received this and its two sequels from Netgalley, for which I thank them. Not my usual fare, but for me good writing trumps genre – I’ve been pleasantly surprised enough times to almost balance out the unpleasant surprises. This sounded like a light, quick, enjoyable read. It sounded like a sweet, gentle romance with a sense of humor and a bit of a paranormal flavor. And that’s what it was: it was sweet, it achieved funny here and there, it was comparatively gentle (which in my library usually means no explicit sex – in this case there was some), and there was more than a hint of otherworldliness – magic, even, particularly in the first half.

For me, though, the sweetness, fun and engaging in the first half of the story, became a bit cloying by the time the couple in question got their act together. The endearments, the “does he love me” “does she love me” “do I love him/her” “should I tell him”, all started to stale pretty quickly.

The “gentle” aspect of the story was swamped about two-thirds of the way in what I found to be some awkwardly phrased lust. The book had a strange sort of split personality: on the one hand it was woven through with Christianity, emphasizing the impression I had that this was going to be an old-fashioned sort of romance. However, it shortly turns out that the “hero”, Tyler MacGregor, has been in the past rather slutty, and he’s not alone. The sex scenes were introduced sparingly, which is a positive; writing in these scenes is rarely better than awkward, and is often howlingly bad. This didn’t bring howls of outrage, but it did cause a few groans – no, not in a good way.

The magic, initially, hit the right notes. There is something strange keeping T.J., an artist, at the Seascape Inn,

and he’s been there for nine months. Every time he tries to leave the property he ends up flat on his back on the rocks. Which doesn’t stop him trying. What I have a hard time understanding is that, apparently, he keeps trying in the same place, so that after nine months he’s left a T.J.-shaped dent in the ground. Every day, apparently, he tries the same thing: he goes to the edge of the property, draws a line in the dirt, tries to step over it, is knocked out. It was, possibly, Einstein who said that the very definition of insanity is doing the same thing over and over and expecting different results. It might also be a definition of … shall we say a lack of fundamental data processing functions? The supernatural-ish happenings increase when Maggie Wright arrives, and that’s about where this aspect of the book started losing ground for me. The book had a split personality, and so did this part of it: the “entity”, as the two of them begin calling it, seems to yo-yo from being a particularly invasive match-maker to being mildly malignant. Whatever the outcome, there are certain things done by this “entity” that I for one wouldn’t be too quick to forgive … In fact, were I T.J. I think the next time I sat in front of a computer, which would be soon, the first thing I would be doing is http://www.goodsearch.com, keywords “Maine, priest, exorcism”. And that web search would not be done from within the property boundaries of the inn; once I got out of there I would send for all of my possessions and never go back again. There was much made of the peaceful and restful and loving atmosphere of the place, but this was a good example of the difference between showing and telling: the reader is told that it’s a good place and any spirits residing there must be good, but what is shown through the events of the story is kind of the exact opposite. Manipulation, physical attack, holding someone against their will, extreme invasion of privacy, outright mind control and brainwashing … this is less Casper and more Japanese horror.

There were good and bad aspects to the writing as well. The very first sentence of the book is “T.J. MacGregor tried to leave Seascape Inn, but every time he crossed the property’s boundary line, he blacked out.” For the next four and a half pages that one sentence is reiterated and reworded and expanded upon, along with information dump on his past. It was a close thing as to whether I was going to push through those first pages because of the heavy-handedness of it all. Unfortunately, the author’s hand remained pretty heavy throughout.

A distracting quirk of the writing was the constant repetition of “mmm?” in dialogue from just about every character in the book.

I have to say I was a little disappointed in the lack of art-related detail in the book. T.J. is a painter, and a good one – honest enough to own he’s not extraordinary, but he is good; it is his painting of the inn which, seemingly, sparks most of the plot. Granted, he has not painted in some time and has no intention of beginning again, which lets the author off the hook for the most part, but throughout most of the novel he might as well have been a lawyer or a pilot.

The book, overall, was … fine, kind of straight down the middle. I liked the main characters well enough (when they weren’t irritating me); I liked the setting; I liked the slightly clichéd background characters. I liked the idea the story began with but hated the explanation – I hated the “entity”, both the concept and the character. There are two other books set in the same place, with similar storylines; one of these days I might just give them a try.

Like Loading...
This entry was posted in books, Chick lit and tagged Beyond the Misty Shore, Maine, NetGalley, Vicki Hinze. Bookmark the permalink.

2 Responses to Beyond the Misty Shore – Vicki Hinze