The Thorn and the Blossom – Theodora Goss 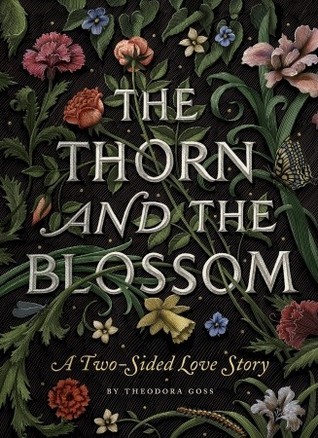 Whatever else there is to say about this book, it’s a lovely concept, and beautifully executed. It is called a “Two-Sided Love Story”, and this is literal: we are able to read the story from the point of view of each of the lovers. Rather than being bound like an ordinary book, the pages are strung together in accordion folds, sandwiched between two very pretty covers, and encased in a gorgeous slipcover. When one story is finished, the book is turned around, and the end of one leads into the beginning of the other. It’s a charming idea, and quite unique.

Unfortunately, one reason for its uniqueness might be its awkwardness. It’s a story more than a book – each side being only about 40 square-ish pages; anything longer would have been almost impossible to read without spreading the book out in one long scroll and reading it that way. The back side of whichever story is being read has to be held together in order to allow the reading to progress normally. It might have been helpful if there had been some sort of strap incorporated into the design which would take the place of and do the job of a spine.

Also unfortunately, the slight little tale told in this unusual book did not, for me, live up to the charming format. There are almost-connections and near-mysticism, and fits and starts of love affairs – in short, the story was as awkward in a way as the format, when it had promised as much. In the end I was disappointed and unsatisfied by both the story and the characters. I simply didn’t like the main characters, and to me the magickal elemen

ts fitted poorly with the mundane, both in the story and in the characters’ lives. The idea of the two overlapping stories was supposed, as I read, to be that one character’s tale would alter the focus on the other’s. What I found, rather, was that one simply contradicted the other.

Between an attention-getting format and a truly lovely design, this could have been spectacular, a gem of a book to be treasured. Instead, it’s a story memorable, I’m afraid, only for the format and design.

Like Loading...
This entry was posted in books, fantasy and tagged LTER, The Thorn and the Blossom, Theodora Goss. Bookmark the permalink.

3 Responses to The Thorn and the Blossom – Theodora Goss