Today would have been Anne Frank’s 83rd birthday, and is seventy years from that day her parents gave her a red plaid diary.

Over two years ago PBS aired a new retelling of her story, and this was my response, originally posted on the neglected flip side of this blog, Walk in the Dust.

I was looking forward to the Masterpiece Theatre (or whatever) take on Anne Frank’s story. Looking forward to it … I must have read the Diary when I was a kid; I must have seen one of the films, probably the one with Melissa Gilbert. I don’t remember. I do remember The Attic: The Hiding of Anne Frank, based on Miep Gies’s book. I don’t remember why I was so eager to watch this.

Perhaps they did too good a job of telling the story. I almost – almost – forgot the ending as they lived the middle. The acting was top-notch; the writing and use of the Diary excellent… There was no glossing over or sanctifying of the people in this story, as I’m pretty sure happened in the 50’s film version. This was a group of eight people trapped for two years, more or less, in a very enclosed space with limited food, limited amenities, and limited hope – the only thing they had plenty of was fear. Oh, and anxiety. Any family caged up together like that would have problems, and the Franks were … ordinary. Very intelligent, enlightened, overall a warm and loving family – under normal circumstances there wouldn’t have been much to tell about them, and that’s usually a wonderful thing; tales are only told about the interesting, and the interesting is generally uncomfortable, at least. Unfortunately for them, their lives became … interesting.

Petronella van Daan was played by Lesley Sharp; she had a fine touch on showing the woman as deeply irritating and yet, at times at least, understandable and sympathetic. But not someone you’d want to live with 24-7, 365. Her husband Hermann (Ron Cook) seemed like rather a good fellow, at least trying to smooth things with the others – just not with his own wife. Geoff Breton was Peter van Daan – poor, poor Peter. Quiet, shy, unable to understand Anne’s mood shifts… I wonder whatever happened to his cat.

Albert Dussel (Nicholas Farrell) … My heart broke for him. Earlier than it did for the rest of them, that is. He told Anne that he had quite a few children as patients, and so they should get along splendidly – to which she replied rather sharply that she wasn’t a child. And having children as patients – having to work on their teeth, endure the screaming and crying and intense dislike and then hand them off back to their parents – is vastly different from having to live cheek by jowl with one… I can’t imagine how it came to be arranged that he and Anne would share a room; I would have thought they would shift Anne to Peter’s spot and give Peter and Mr. Dussel the double room. As it was, it was unendurable for both of them… as evidenced, I’m sad to find, by the name used in this production, which was the name used by Anne in her diary. “Dussel”, apparently, means “nitwit” – his real name was Fritz Pfeffer. A 54-year-old man who seemed to value privacy and peace forced to cohabit with a precocious, sharp-tongued, impatient young girl just hitting puberty … That must have been hell. For both of them.

Otto and Edith Frank (Iain Glen and Tamsin Greig) … Sharp-eyed Anne decided that her father didn’t love her mother as much as she him; he kissed her in the same way he did his daughters. But he looked after her, perhaps much as he did his daughters, constantly trying to shield her from news of what was going on Outside – which she was too frail to handle. He was strong enough for all of them. She was shown as nearly catatonic at the beginning here, to the point that she nearly started a fire; I read that when her daughters were transferred from Auschwitz to Bergen-Belsen without her – she was too ill to be moved, even by Nazis – she broke down completely. She had the hands of a lady…

Margot (Felicity Jones) … She’s a separate heartbreak for me. “The pretty one”, “the good one” – she tried to keep the peace at whatever cost to herself. Less self-centered, more empathetic, more patient than Anne, she was better able to internalize what she felt, and to at least seem to tolerate it. Which of course led to a great deal of “Anne, why can’t you be more like Margot”, which sort of thing never helps anything.

I don’t know that I would have liked Anne. I might not have finished the diary because I went into it expecting Anne to be a sympathetic and lovable girl – and she wasn’t. She was an extremely intelligent girl. She was observant, and eloquent, and mercurial – and the combination of those three things with a prepubescent self-centeredness and a wicked sense of mischief and humor did not bode well for her fellow inmates in The Annex. She had probably been raised by her liberal father, at least, to speak her mind, and she saw no reason to change that while in hiding. She seems to have been a stunning combination of ready-for-anything little girl and 13-going-on-40… It’s odd; where she was lacking it seemed that Margot was strong, and vice versa; put the two of them together… 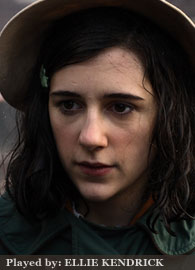 Ellie Kendrick was Anne, and was perfect. She sank into the role, didn’t hesitate any more than the production team to show her warts-and-all, and, predictably, broke my heart. I should think she would have won awards for this performance, but I don’t see anything out there; she was utterly natural. I could wish she had been much worse.

“… It seems to me that, later on, neither I nor anyone else will be interested in the chatterings of a 13-year-old schoolgirl…”

I could wish that no one ever had cause to be interested. She was given the Diary on her 13th birthday in 1942, and started writing in it … and a month later she and her family went into hiding. I could wish that the rest of the book had been filled with wondering at and about boys, movie stars, and the horrors of a mundane adolescence… I could wish that she had kept up her diary for many years and that the only interest it would ever hold for the world at large would be as the very earliest writings of an acclaimed author.

I knew the end would have me in tears; I just didn’t realize how overpowering they would be. They weren’t – aren’t – only for the eight of them. They were for the six million… That number still shocks me. Too, they’re for my loss of simple pride in my country; it wasn’t till tenth grade history class that I learned how poorly the United States showed in the beginning of the War. I wanted to deny it when I was told that boats filled with fleeing Jews were turned away from US shores and sent back to concentration camps. I wanted to protest when I was told that this country practiced such strict isolationism that it took two years and an attack on Pearl Harbor to boot us into participation. I could wish we had better lived up to our image of ourselves.

I could also wish that stories of WWII and the Holocaust didn’t affect me so deeply. I can’t put my finger on just why they do – it hurts to touch. But London during the Blitz, POW camps, and, of course, the lights that shone out of the concentration camps, all wring me out like no other stories. Maybe because it was one of the only cases of truly good versus evil, the last time a war was so clear cut and easy to justify: Nazism is evil and must be stopped. End of sentence. Today’s wars aren’t so easy to cipher. Maybe because the War is still so near; people who lived through it are still alive. Dad was in Japan. Nearly all my maternal uncles were in the war – only Uncle Gerald wasn’t, and he nearly died trying. It’s recent, relevant, and the deepest and most concentrated well of pain and horror and heroism, good and evil in the past century. The story of Anne Frank is the story of that war, in microcosm. The turning upside-down of one young girl’s life is a lens through which the whole thing becomes sharp and clear: the pain of knowing so many friends and family were, inexplicably, gone; the horror of starting at every sound, until one night all the worst fears come to pass. The heroism of Victor Kugler, Johannes Kleiman, Miep Gies, Bep Voskujil, and the others who risked their own lives daily for the hidden eight. The good that even amidst the horror the eight of them could still find moments of peace. The evil that someone betrayed them. That’s the biggest heartbreak: someone, and it was never discovered who, betrayed them: two perfectly ordinary married couples, three teenagers, and a middle-aged dentist, betrayed them and those who helped them to almost certain death. It may sound simplistic, but I don’t understand it. I don’t really wish to.