I didn’t hear much laughter out in the “Pre-event” area, as the Sheraton floorplan calls it, as the Jeopardy coordinators scored the tests, but I hopefully my stupidity got a chuckle, anyway. They could not, we had been informed, tell us how we did. I kind of expected that, as that’s the reason I took screencaps of the online test – you don’t find out there either, and I wanted to a) remember more than the fraction of questions I knew I’d be able to think of after and b) check my answers. (My instinct is that this policy is so that they can feel free to cast someone who didn’t test as well but who had a great TV personality instead of someone who aced the test but was a stick in the mud.) Apparently, they did testing at Princeton, and had some fear of losing their lives, or at least a couple of limbs, when they announced they couldn’t give out scores – I guess it makes sense that Ivy League students are pretty serious about grades!

The pen again – isn’t it purty?

In the next phase, Maggie and Robert had us practice “ringing in” using our Jeopardy! pens, with the bright

orange clicker button. (If they really loved us they’d make pens the size of the signalling device – which is actually rather smaller, I think than the 1.5 inch diameter I’d seen somewhere – more like 1″.) Here’s where my practice while watching the show started to pay off. A question would appear on the screen, and there would be three dots on each side of the rectangle. They would be dark as Sarah was, again, reading the question, and then as soon as she finished they would light up: the signal that it was time to ring in. In the real thing – and the mock game – ringing in too early would lock you out for half a second. If someone got a question wrong, the lights would light again and it would again be safe to ring in. After we played with our pens for a second, we went through a few rounds of sticking up our hands and waiting to be called on. I believe there were eighteen questions, and twenty of us; I know Melissa wasn’t called on. I was – and have no recollection of the moment. I know I perked up a little – bizarrely – that there was a basketball category, but it turned out to be one of those “literal” categories in which “A form of energy associated with the motion of atoms or molecules” meant “What is the Heat?” Again, no application for any of the studying.

Then came the scary part. (Not as scary as the headshot, but scary.) We would be called up in groups of three to the front of the room, each given a buzzer, and would as closely as possible replicate actual game play. Six familiar columns appeared on the screen (with only three questions per category), we were reminded how to proceed – answers in the form of a question (in the first round, forgetting that would on the show result in “Alex giving you the stinkeye offscreen”, but reminders would be given; in Double Jeopardy forgetting simply resulted of course in a wrong answer), wait for the moment to ring in, don’t answer till called on, then sing out the category and dollar amount where you wanted to go next. Don’t, Maggie cautioned, take shortcuts here; “Crossword Clues D” could be called “Crossword” if desired – they would know which category you meant – but it would be risking forgetting the important part of the category: this is when you might forget the “D” in quotes and yell “What is Cuyahoga!” and wonder why everyone was groaning. (Funnily enough this is exactly what a former champion advises players to do – leave out that important part, so as to trip up the other two in just that way. Just, of course, don’t forget it yourself.) So: three at a time, run through several questions, then one by one introduce yourself and tell us something about you, and chat with Maggie and Robert.

I was in, I think, the third group called up; the other two beat me by few seconds, and someone queried where I was, so just said “Sorry! Short legs!” and chugged on up. (“And from the back of the room!” Maggie laughed.) And so it began. And I started to get scared, because question after question went by and I had no idea how to take any of them. About five questions in I rang in more to prove I was still alive than anything else – and they called me. Of course. I wound up having to try to come up with the president of eBay. I should have known it … and … didn’t. I floundered, one of them prompted “Who is – ?” Which didn’t help; I repeated it and then just said “Margaret Thatcher”, and … oh well. I’ll never forget Meg Whitman now. Happily, I kind of hit my stride a few seconds later, and rang in – and correctly answered – a few more … and almost fell over when a category came up on the screen called “Prisoners in the Tower of London”. Shut. Up. I was dying to get in there. Someone called for the $200 question, and I blanked – I should have gotten Thomas More, God knows, and dang it I knew I should have read Wolf Hall, and then I finally had my chance. I got something right (no idea what) and said – just as Maggie called out “Last question!” – “Tower of London for six, please” – and the second the answer 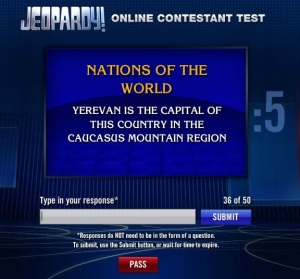 appeared on the screen I smiled. No, it wasn’t Rudolph Hess – but it was William Wallace, and I rang in, and got it right, and that was that.

I wish I could remember the other questions. No idea. I do remember getting one and Maggie saying “I had a feeling that one was up your alley” – which was funny, ’cause how would she know where my alley was? She was right, though. She’s goooood.

Somewhere out there I had read that the buzzer – officially called the signaling device – was problematic; it was either too sensitive or took a solid thwack of the thumb to register. I didn’t notice either; I was comfortable. The whole procedure came weirdly naturally.

Then came the mini interviews. I was shockingly un-nervous. The first person (in the returning champion position) was the girl who had been interrogated by the strange random lady in the hall; she was great. Next

was my fellow Connecticut-er (why can’t I remember names?), and he did very well too – he’s an artist, and went to the Lyme Academy of Fine Arts (*envy*). Then there was me. I tried to project, introduced myself as an office manager from CT – and mentioned that they had called up the two Connecticuties in the same group. I have no idea where that came from. Yes, I am embarrassed. Hey, we don’t have a good name, and we were cute as hell. A lot of the questions were coming straight from the Five-Things-About-Me sheets, I could tell, and I waited to be asked about locking my finger in the car door or the teddy bears I make or why my family laughed in the cemetery, but they started out with what I like to do. I said I love to read, and write – and, as I put in my notes, I was talking to a friend once and a phrase struck me that fit so well I’ve used it ever since: “I put the ‘dent’ in ‘sedentary’.” And everyone laughed. That’s a good feeling, that is. They asked what I write, and this blog didn’t even come to mind, although I’ve probably logged more words here than in any manuscript, but I talked a little about the book – and, shockingly, I did not stumble over it. (Once in a job interview the writing came up and I blithered on something along the lines of “It’s a fantasy novel – an adult fantasy – not THAT kind of fantasy, but just you know oh dear”. Yeah. Somehow I didn’t get that job.) As far as I remember, I spoke up, I spoke clearly, 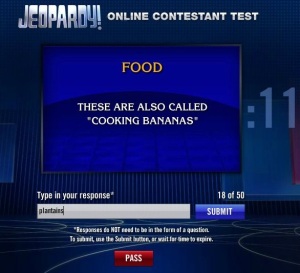 I answered in relatively complete sentences, and I was coherent. And I made them laugh – on purpose. And before that I correctly answered several questions, ringing in properly and beating out the other two. It wasn’t bad at all. *deep sigh of relief*

The one question everyone was asked was “What will you do with your Jeopardy money?”, and I had variations on the theme going through my head – get rid of the mortgage, buy a sword, help put my nieces through college, go back myself, take my mother to Newfoundland, etc. Of course they all went out of my head. Some of the answers were excellent – especially the ones who wanted to do something for someone close to them; some weren’t so hot, like … I’m not sure it was too wise to exclaim that you were taking the money to the casino to blow it all; the next day on “So You Think You Can Dance” Nigel noted to one girl that it might not be the best idea to list as your claim to fame that you can fart with your neck, and I put the casino thing in the same bin. But that’s me. What I ended up blurting out was “Travel! Oh, everywhere – England, Ireland, Scotland,

Wales” … I should have said “England for Shakespeare and Tolkien and Sayers, Ireland and Scotland to do some genealogical investigation, and Wales for Doctor Who” … Oh well.

And then I sat down. My part was over. Five weeks of intermittent studying on everything I could think of, and a whole lot of nerves, and it was over. I sat and watched the rest of the group go up – and every single one was a contender – and could just enjoy it like a series of mini-episodes (it was hard not to yell out answers – that’s going to be the challenge if it ever goes farther, I think, though the concentration was solid enough in the mock game that maybe it won’t be).

The numbers bear repeating. Maggie told us some statistics which, even if this is the end of this trip, kind of create a warm glow:

I feel like Nigel Lythgoe sent me to Vegas and I made it through the week. Now I just wait for him or Adam Shankman or Lil C to show up at my house and tell me yes or no…

Wait – for eighteen months. It’s gonna be hard to get through that kind of time period with so many digits crossed.

And that’s it – that’s my big event. Quite possibly the biggest thing that’s ever happened to me, whatever happens next (or doesn’t). I highly recommend the experience – wait! No I don’t! All you smart people who would be competing with me for a place, don’t do it. It was horrid. Really. Trust me.

Real life with quite a bit of studying, that is.