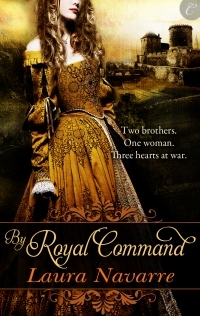 A cover which is part of the Goodreads list “Does this dress make me look anachronistic?”

This had a terrific opening. There is nothing like being dropped directly into an 11th-century standoff between an eighteen-year-old girl and a pack of starving wolves to get your attention quickly. And when her savior isn’t the conventional Knight in Shining Armor™ but a figure almost as terrifying as the wolves, all the better. For the reader, that is.

I am sorely tempted to edit the book’s description. “Two brothers. One woman. Three hearts at war.” Um, huh? That makes very little sense, especially for the first half of the book (and not much more in the second). “Katrin of Courtenay … doesn’t need a husband to hold her northern keep.” Well, yes, she does – that’s one of the whole points of the book, the fact that Courtenay fell when her husband died and has ever since been a massive hole in the dam holding back the raiding of the Danes. She certainly could not hold it on her own, and one of her biggest struggles throughout is that to see the fortress manned again.

“But her vengeful uncle, the King of England, has other ideas: intent on marrying her off, he’s ordered his Viking-bred warrior to return her to court.” That is a pretty good summing up, I will say: the man who saves Katrin from the wolves is that warrior, who is an honorable (depending on how you define that) man loyal to his king whose task is to pick Katrin up (physically if necessary) and deliver her to her new destiny. He can’t understand her (to put it mildly) reluctance to comply, and decides she must be exaggerating when she tells him of her fear of being forced to marry another monster because the king’s unrequited love for her mother manifests in revenge on Katrin and her father. It does sound a little far-fetched, doesn’t it? But it’s actually made fairly reasonable by the presentation of a very unreasonable king.

There was a good bit that I liked about this book. The writing was intelligent, and knowledgeable about the period – I learned, for example, that a vewterer looked after a lord’s hunting dogs (greyhounds, to be exact, and there’s a lovely movement named for them), and a sparviter after the hawks (specifically sparrow-hawks). The characters felt like their manner of thinking was of the proper time period – Katrin, for example, does not want to evade a second arranged marriage because she wants emancipation, but because she has the gut instinct that it will be used as a punishment for being the daughter of her mother. The mores and restrictions and priorities of the period are, to the best of my knowledge, well adhered to.

Also, the sex scenes did not follow the usual pattern of “panting and flailing and roosters and kitty cats” (my goodness, I do love that and will use it forever). They seemed to try to adhere to the time period as well in their language; in fact, there were lines in the scenes of passion that I actually liked. If nothing else, “the curving shell of secrets” beats all heck out of almost every other epithet I’ve seen.

It just doesn’t do to think too much about those passionate scenes, because the whole thing begins to fray with the first one. A scene which includes a man spanking a woman is usually the end of the line for me … although, in this case – not that any woman ever deserves to be struck, ever, at all – Katrin definitely did have some kind of reprimand coming for a plan she hatched without ever taking all the consequences into account.

I liked that Katrin’s original plan on the trip was to seduce the big lunk of a warrior, Eomund, as much as necessary to either sway him to her point of view or to lull him into complacency so she can take off on her own. The only problem with that, from a reader’s point of view, is that the plans were fuzzy-headed and – like the afore-mentioned plan which culminated in her physical punishment – never really thought through. Then, of course, the two of them fall in love, and that puts a crimp in whatever the plans were; I liked that Eomund wasn’t going to swerve from his duty, however personally painful it suddenly was. That was all well done. I liked Eomund altogether; the men as a group were rather well done, except that the two Bad Guys were almost unrelievedly and inexplicably Bad.

Aside from that spanking (it hurts to even type that), the beginning section is rather good, but it all falls apart a little more when Katrin reaches court. At that point she begins behaving in various erratic ways that didn’t seem to fit the period or what we’d been shown of her character. This is the second, interim section of the book, and – for me – the least successful; the king’s erratic and irrational behavior makes Katrin look like a very model of reason. Nobody acquits him or herself very well here. While it’s fairly acceptable that a monarch, with absolute power, might also be squirrelly, it just seems like too easy a tack to take.

Also, unfortunately, here the story resorts to the old gosh-she’s-sick-every-morning-must-be-coming-down-with-something-OH! routine. If I had a nickel for every time that old shtick has been used in books, movies, and television – actually, where do I apply to get those thousands of nickels? That would be lovely.

The final third of the book follows Katrin to her new marriage, and things pick up again, in an entirely new direction. Rafael, Katrin’s new assigned husband, is mysterious and mercurial, and much better looking than she expected. He is also rather more worldly than she has been led to believe from his history as a candidate for the bishopric. (I wonder about this a little, since generally, I thought, one had to be a priest before they could ever be a bishop, and there is no indication Rafael was ever ordained (or defrocked); however, it seems like he was going straight from (slightly) cloistered layman to bishop, do not pass Go, do not collect 200 ducats.) He is not the monkish timid fellow she thought she was being yoked to – far from it, as their first meeting (which was quite a bit of fun) shows. The rest of the story involves the tangled threads of half-brothers and inheritances and redirected lives. It’s somewhat far-fetched except in the realm of romance, but very readable.

The three parts of the book made me think of three beads on a string, touching but not really connected. The events of the first third do certainly carry over into the other two, and the second into the third, but apart from the ongoing relationship with Eomund in the middle the effects are muted as circumstances – and emotions – change for Katrin. The short version being: they could have been three almost independent stories.

Some of the good (the quality of the writing, the sparks of life from some of the characters, the fun of the final third) counterbalanced most of the not-so-good (the clichés that were succumbed to, the occasional incoherency of the heroine)(and the spanking), and it was all wrapped up in a (mostly) satisfying ending. Though one character who shall remain nameless was shooed offstage and dismissed a bit coolly, by both the former love interest and the story; that was perhaps life-like, but not slightly disappointing storytelling. It was better than expected – though I do wish it had better lived up to that opening.

Like Loading...
This entry was posted in books, Chick lit and tagged By Royal Command, Laura Navarre, medieval, Viking. Bookmark the permalink.