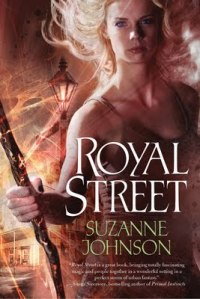 Royal Street is another Netgalley offering which made me very happy. Netgalley is like a box of chocolates – you never know what you’re gonna get. Royal Street is one of the ones that looks like it might be one of those odd chocolate-covered taffy things, where the inside is that strange pastel color and you seem to just have to chew and chew. It might look that way, as possibly just-another-urban-fantasy, but Royal Street is actually pure coconut. Or, as the Cigarette Smoking Man preferred, English toffee.

I don’t know why it’s been so hard to polish up and polish off this review….

It has, in real time, been seven years since Hurricanes Katrina and Rita, and – well, here in Connecticut the impact of those horrors was mainly through our television screens. It was terrible – but we were largely able to proceed with our lives, grieving during the evening news each night. It was an impersonal horror.

This story brings it home and makes it personal. In fact, I think it’s brilliant how Suzanne Johnson uses the disaster as a springboard for her story: natural disasters cause the barriers between worlds to weaken. There is this world, where wizards work quietly and unknown to mundanes to keep things on an even keel, and there is the Beyond, where all of the mythical mystical beings of legend and young adult novels dwell. Dwell, but don’t 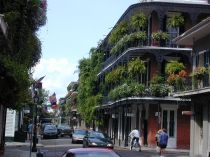 like to remain; they would rather be here, powers amidst the powerless, rather than exiled to the Beyond where any average prete (short for “preternatural”) is a small fish in a big magical pond. This world is much more fun and tasty. New Orleans, always prone to breaches being as it is and ever has been steeped in magic even mundanes can’t help but be aware of, is now wide open because of the huge disturbance of the hurricanes. Wizards are kept busy containing the situations that arise – anything from gnomes looking for a drink to vampires looking for a drink. The book begins just a couple of days before Katrina, as the Louisianan main character – Drusilla Jaco (DJ) – watches weather forecasts with an eye half worried (it really does sound like a bad one) and half jaded (but we’ve heard all this before).

That’s one side of the tale – the increase of preternatural activity, including the disappearance of Drusilla’s

mentor Gerry, with whom she has lived most of her life. He made her evacuate for the storm to her grandmother’s house; he stayed, as sentinel of New Orleans needing to be on hand for whatever happened. And now he’s gone without a trace, mystical or otherwise, and in addition to that and the expected increase in other activity National Guardsmen are being murdered. Also alarming: strange symbols are being found on houses all throughout the area… the houses of wizards. And DJ, not-quite-trained as she is, is suddenly the only sentinel on hand.

The other side of the tale is the one everyone faced.

The houses on either side of Gerry’s were deserted, windows broken out. Heck, every single house in Lakeview was deserted. Two square miles empty and ten thousand people homeless just in this one neighborhood.

Then multiply it by dozens more neighborhoods.

This is her city. And, slowly at first and then stronger and stronger, it becomes clear that it will never, ever be

the same again. It’s just the beginning of the pain, still fresh, still in survival mode; reaction has not had the chance to morph into the outrage over failed levees and the debacle the trailers turn into … The pain is still concentrated on what the hurricanes did, not the government: nearly 1000 deaths, and many times that struggling to cope with the loss of everything they owned.

The magic system of the book is lovely, well thought out and detailed with plenty of room for exploration later. Johnson achieves the best of all worlds by simply creating several classes of wizard – red, green, blue, etc. – and allowing each group different strengths and abilities. With this, DJ is quaffing potions and throwing vials containing various spells like a bona fide video game heroine, and her mentor Gerry can burst open a door with a wave of his hand. And neither can do what the other can.

Seriously awesome random line: At this point, I could have been floating around with a lampshade on my head, playing maracas and singing show tunes.

Odd quirk of the text: “Bon chance” is always used instead of “bonne”.

The pirate Jean Lafitte is a major player in the book, right from the beginning (and he has eyes for DJ). He is 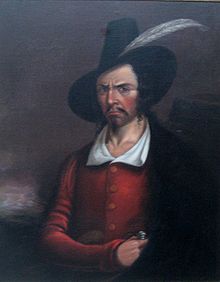 beautifully used, as a story-telling device (he serves as the reader’s introduction to pretes and how they are dealt with) as well as simply as a character: yes, this is indeed what the pirate must have been like, and how he would behave. The reality of the character is not forgotten: this fellow is no charming rogue type, though he can be charming and “rogue” can be substituted for “scoundrel”. He is ruthless, violent, intelligent, and out for profit – and is also alarmingly attractive even though he oughtn’t to be. He seemed like he was intended to make a cameo appearance and then wouldn’t leave. “The old rule about taking candy from strangers should apply doubly to taking alcoholic beverages from undead pirates.”

One of my Issues with my reading of late has been a tendency toward Everybody Loves [insert heroine’s name here]. The stunningly gorgeous (though not cookie-cutter beautiful!) female main character moves through her life drawing men along behind her like a magnet through a metal shop rubbish tip. In time there isn’t a man of appropriate age (and sometimes in-) who is not goofy in love with her; even casual interactions show unnamed NPC’s giving her smiles and special treatment.

The funny thing is, Royal Street goes that route … sort of. All I can really say is that if you’re gonna do it, do it like this. DJ is attractive, but not the be-all and end-all, and the men who enter her life become attracted to her in a more natural manner – one becomes her new partner, one is his cousin and part of the attraction is a competitive streak between the two men. And then there’s Lafitte – but he’s just like that.

I love that DJ doesn’t play the moronic games so many heroines (and in fact heroes) do: I really should share such and such information with this man who has announced himself as my partner, but he irked me and I won’t, I’ll just go into this ridiculously dangerous situation alone and fix it all by myself so there. She doesn’t much like him, doesn’t want him around, hates that he thinks Gerry might have been on the wrong side – and she works with him like a reasonable adult human being in a bind. They help each other. Also, he doesn’t spend the entire book keeping stupid secrets from her; there is one huge secret that he spills fairly early on. It still has impact – comical and plot – and doesn’t end up being something she can screech at him for keeping from her at the end of the book. As happens in so many books. She even promptly tells him about her dreams. This is awesome.

Five stars should be reserved for enduring classics – To Kill a Mockingbird, LotR, Tale of Two Cities, like that. But four stars isn’t enough for a book like this. So: four and a half stars (three quarters, even) in reality; on Goodreads – 5.

I always hated it when TV reporters stuck a microphone in the faces of people who’d just lost a home or a loved one, wanting to know how they felt. They felt like shit. They hurt, and they didn’t know how they were going to get through the night. They wanted to scream and cry and hit the guy with the microphone.
————————

I recognized the musician immediately – Louis Armstrong, with his close-cropped hair and a face that looked like it had done more laughing than frowning. He wasn’t laughing now. A few soldiers and bohemian Quarter residents gathered around him, their faces solemn. More than a few wiped away tears, but the set of their jaws was hard. We’d all mourn for a while, but at the end of the day we were a tough lot, and we’d survive. …He pulled a white handkerchief from the breast pocket of his black suit and wiped his face with it. The temperature hovered around ninety, but he didn’t seem to mind despite the old-fashioned suit and bowtie. After making people cry with his music, he was now teasing them into laughter.

View all my reviews