I started the year in ancient Rome, care of Netgalley (thank you). Well, no, not Rome itself, but the Empire in general and what is now part of Turkey specifically – Bithynia. Plinius Secundus, called Pliny by those around him (or Gaius by those closest to him, just to mess with your head) and Pliny the Younger by history, has been sent to this barbaric outpost to investigate and clean up the corruption that is rampant there among the Greeks – or, as the Romans patronizingly refer to them, Greeklings. The previous governor played fast and loose with lots and lots of money, and when he left – not quite in disgrace – he took a lot of the moveables with him, so now Pliny, his beloved wife Calpurnia, and his household – including the freed slaves he and his wife find indispensable, Ione and Zosimus – not only has to cope with insolent and indolent slaves, a disgruntled and resentful populace, and a corrupt and snobbish Roman community, but also a residence that has been left uncomfortable and ill-kept. It’s a challenge. But Pliny has the confidence of the emperor.

A new roadblock is thrown in his way when suddenly a Roman official is murdered. He was an unpleasant man, and corrupt, but his death is highly inconvenient – and given that less than a hundred years ago there was a rebellion and slaughter of Romans right there in Bithynia, Pliny is anxious to keep things as calm and steady as possible. Did the murder have something to do with this cult of Mithras that keeps creeping in around the edges? Was it because of money, and if so was it business or family? Was it political? Could it have been jealousy? (Nah.) Before Pliny can answer any of this, he is called to another scene of death …

For a good percentage of this book, I had a five-star rating dancing before my eyes. The writing was very fine, and the characters were well-rounded, dialogue felt “period” without being patronizing or archaic. The setting was vibrant in all its sordidness and felt alive and current, both alien and familiar. It was when part of the plot began to devolve into soap opera and a character I had really liked suddenly became Too Stupid To Live, and when it was – in one gut-wrenching scene – revealed that absolutely no one was faithful or trustworthy: that was when my opinion of the book started to slide. Wait. I take it back. One person was faithful and trustworthy. He didn’t last long.

So help me, I can’t imagine why writers still insist on putting boar hunts into their books. The minute someone says there will be a boar hunt I know there is, literally, no exaggeration, at least a 90% probability that someone’s gonna die. It’s ridiculous. It has become a cliché. Someday I’m going to go back through all the historical (and fantasy, for that matter) novels I’ve ever read and put together a compendium of Deadly Boar Hunts. People: STOP IT.

None of this makes it a bad book (hence the fact that it retained four (three and a half, really) of those five stars). But it was depressing. And it took the plot in a direction almost directly opposite from where I either wanted or expected it to go. The synopsis on Goodreads states that the finale is tragic. I don’t think so. “Tragic” would have had me in tears, surely, or feeling something; this … this just had me thinking “wait – you mean – aw, come on, isn’t killing that person off a little convenient, and kind of mean? And what about – oh, you’re kidding. 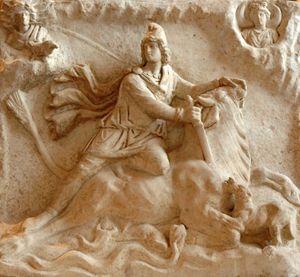 One smallish thing that did bug me was the contrived cleverness of Pliny’s man Zosimus. He would for the most part remain silent, as befitted a freed slave in the company they were keeping, but when he spoke up it was always pithy, always clever – and often coined those words and phrases used today. Clew = clue, for example. It was a little too cute.

I really enjoyed Pliny, and he’s a great choice to center a series around – he knew everybody. Suetonius was a fun character, and I’d love to read any of his works that have survived. I was looking forward to a first century detective series with these two, with a solid scholarly grounding and a sense of humor… Now I don’t know if I’ll keep going with it. A disappointment.

(However: the audiobook of the first in the series was narrated by Bronson Pinchot. Hm.)