Wil Wheaton, King of the Geeks 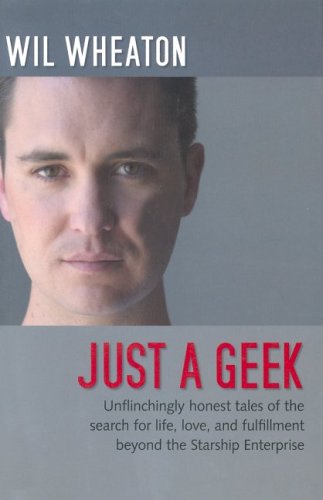 Let me get this out of the way: I hated Wesley Crusher. Deep and burning passion of loathing? I had it. Here was this kid, younger than I was, taking screen time away from the magnificent Captain Picard. Saving the ship. Putting the ship in danger and then saving it. Piloting the ship. There was apparently a group who were rooting for seeing him go out an airlock, and I would have joined it – and, yes, it was in some part jealousy, because I was a young and rabid Trekkie and here was this kid, younger than I was… But it was also some poor writing, of the sort that inevitably created antipathy for this kid. It had little if anything to do with Wil Wheaton’s really quite adept portrayal, but there was no wonder that I was far from alone in hating Wesley Crusher.

Unfortunately, others in that group were more vocal than I ever was, and Wil Wheaton knew all about how much how many people loathed Wesley Crusher. And, even more unfortunately and nonsensically, him. That’ll have an effect on anyone – and especially an intelligent, sensitive, earnest teenaged boy who sees his future as that-guy-who-used-to-be-on-that-show writ large in a kind of pathetic Star Trek font. It – and other factors – made him walk away from Hollywood for a few years, and from Trek for a decade.

What this book is all about, and why it kept me up till oh crap, is that the time?! and why my respect for Wil Wheaton is greater than I ever could have anticipated, is his (insert less clichéd word than “journey” here) from the bitterness and hurt and anger stemming from Being Wesley Crusher and trying (and painfully failing) to resuscitate his acting career … to a mature and rather joyful reconciliation with his past, and new and optimistic plan for the future.

The subtitle promises that the book is unflinchingly honest – and it feels like it is. Wil made an ass of himself on several occasions, and he owns to it – and owns it. He is scathing about those who have hurt him (sometimes, diplomatically, without naming names, but really how hard is it to look up the fact that Stuart Baird was the “dick” who directed Star Trek: Nemesis?), and unstinting with his affection for his family and his Trek “family” (though I can’t help feeling the latter don’t deserve it. At all). He’s snarky, and funny, and not afraid to admit that even some of the trolls who anonymously email wilwheaton.net might not be wrong. And when they are wrong, his phaser is set to k- … no, I can’t.

The book was originally published in, I believe, 2004 (before his deeply creepy appearance on Criminal Minds), so it’s especially nice to read it knowing that Wil Wheaton is not only a staple of “Big Bang Theory” but also the perpetual president of OASIS, and deservedly so. “Just a Geek”? Nah, honey. You’re King of the Geeks. And it’s great.

Edited to add: Here’s the kind of adorkable scene from Nemesis.

5 Responses to Wil Wheaton, King of the Geeks