With love and thanks to Dorothy L. on her birthday.

This isn’t so much a review as gathered musings on a book, a cast of characters, and an author near and dear to my heart.

Peter is thirty-three in this book. At the very beginning it mentions “he had followed Sir Julian Freke’s advice and taken a holiday”:

From Whose Body?:
“Ah! Your nerves are not all they should be. …Nothing to be alarmed about, but you must exercise care while undergoing this strain, and afterwards you should take a complete rest. How about a voyage in the Mediterranean or the South Seas or somewhere?”

The man may have been a murderer, and probably a psychopath, but he knew his field. Dorothy L. Sayers wasn’t afraid to make her murderer someone you didn’t really want to see in that role; I don’t remember my first reading of this, but I think there is, for a while, a genuine concern on the reader’s part along with Peter’s that Gerald might actually have dunnit.

Among other things, Lord Peter Wimsey is known for blather. For nonsense. For, as Harriet Vane said, piffle.

“Mester!”
“Yes, old, thing?” said Peter affably, returning.
“Happen he’ll set dog on tha.”
“You don’t say so?” said Peter. “The faithful hound welcomes the return of the prodigal. Scene of family rejoicing. ‘My own long lost boy!’ Sobs and speeches, beer all around for the delighted tenantry. Glees by the fireside, till the rafters ring and all the smoked hams tumble down to join in the revelry. Good night, sweet Prince, until the cows come home and dogs eat Jezebel in the portion of Jezreel when the hounds of spring are on winter’s traces. I suppose,” he added to himself, “they will have finished tea.”

In the seventy-six words of the above piffle (not counting the sensible first and last sentences), there are hits on the Bible (the prodigal son, and Jezebel; interesting she should come into the picture right here), and Shakespeare (Hamlet, “Good night, sweet Prince”), though the cows are a separate entity, inspired, one imagines, by the setting, and possibly a poem called “Edessa” (‘My own long lost boy!’), and “The hounds of spring are on winter’s traces” is from the poem Atalanta in Calydon (1865)”. I believe the hams are from Peter’s own head, riffing off something, I have no doubt. 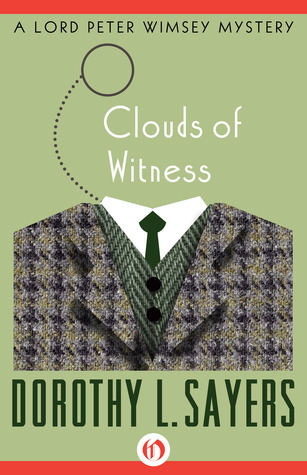 It’s nonsense – goodness knows what all jumbled together in a stream of consciousness irruption. From another character, another author, something like this might cause my back to go up and/or my eyes to roll, or other physical manifestations of annoyance. Peter is, the reader is told shortly, “a respectable scholar in five or six languages, a musician of small skill and more understanding, something of an expert in toxicology, a collector of rare editions, an entertaining man-about-town, and a common sensationalist”. He has had an upper-class turn-of-the-century classical education, and is well able to process reams upon reams of poetry and prose in Latin, Greek, French, English, and I’m not sure what other languages – from nursery rhymes and music hall tunes to Plato and Voltaire – and in other hands than DLS’s I don’t but doubt I might inform such a character or author where they might insert their classical education and go hang out with Harry Dresden. (My version of a Lord Peter would produce piffle largely based off yes, Shakespeare, but also Doctor Who. And would without doubt say at some point “I swear by my pretty floral bonnet”.) But Peter’s piffle isn’t meant to intimidate or put down a reader, or Peter’s interlocutor, I don’t believe. It’s just Peter. It’s Peter’s Rube Goldberg mind that takes a warning about a farmer setting the dog on him: dominos fall, and a marble rolls down a channel, and a pulley slips down a string, and a bucket fills and tips and sends a little toy monkey waddling mechanically forward clapping cymbals which hit a switch, and at the end a flag goes up. Or something. But in a way it’s the same kind of thought process, the same kind of association game that might be found in the head of anyone who has packed his brain for a long and rich lifetime journey. Only Peter vocalizes.

He uses well-aimed piffle to confuse the hell out of people, and to make himself look harmless, and to make himself to look like an idiot – and just because. Maybe this example falls into the category of “making himself look harmless”; the farmhand is perhaps less likely to set the dogs on Peter after his exclamations, making him appear too effete and insubstantial to even worry about, than before.

I love that Parker is well able to conduct inquiries in France on his own. His French is not perfect – he is uncertain about his accent, and intimidated about the lingerie shop (though he goes for it anyway, bless him). And he flatters himself, pleased, that his accent is improving. I can just imagine a salesgirl taking him under her wing and thinking him totes adorbs. (Wait, that’s not French, is it?) I love Charles Parker.

Though not as much as I love Bunter, and especially Peter. Their relationship is wonderful in this book.

For one thing, there is this line:

“Lord Peter stretched out his hand impulsively, but Mr. Bunter was too well trained to see it.”

It’s easy to go in all sorts of directions with that line, and – to me – the obvious direction (shipping) is astoundingly stupid. This occurs right after Bunter reveals a bit about himself that Peter never knew – and realizes he has never looked into: Bunter’s family. In all the years they’ve known each other, and Bunter has served him, Peter never inquired about his past. “Your mother, Bunter? I didn’t know you had one. I always imagined you were turned out ready-made so to speak.” That is – as per usual – flippant, but I think a moment later Peter’s conscience smites him and he feels a need for Bunter’s forgiveness. Friends don’t neglect to ask after friends’ mothers; friends don’t fail to ascertain whether friends’ mothers are in fact living or dead. Friends know how many siblings friends have. And these two are friends, despite the class divide and the fact that one is in the other’s employ – they have been through the proverbial thick and the metaphorical thin together, and saved each other’s skins, and owe each other a great deal. And Peter didn’t know Bunter’s mother was “seventy-five, my lord, and an extremely active woman for her years”. I have to say I’m a little surprised at this; I would have said it’s not like him. Perhaps it’s simply that Bunter is so much a part of his life, a part of him, that he honestly never thought about his existence before the War. Bunter arrived fully formed into his life, has never been so gauche as to intimate he has any other existence, and is always there. For the most difficult part of Peter’s life – most, in fact, of his adult life – Bunter has always been there, and as such a fixture in Peter’s landscape has no separate reality: there was no Bunter before there was a Bunter-and-Peter. He’s not the type, Mervyn Bunter, to chatter, and with six other siblings has no need to take time away from a job he loves to go and tend for his mother. Bunter’s former home life has never been thrust into Peter’s range of vision before.

Also, I came across a really excellent online conversation which, in this, concentrates on that word “was”: “I was one of seven.” [ETA: What a pity – my link goes to a Livejournal blog which has been deleted and purged. That sounds pretty final.] They posit that the use of the past tense indicates that at least some of the siblings have died – of influenza, or in the War. I’m not sure about that – it could simply be “I was one of seven at home” or “I was one of seven children she bore” without the more sober connotation. It’s a very good theory – I like mine better, though: Peter puts out his hand in supplication, wanting to apologize for his ignorance about something he should have known. And Bunter, whatever was in his head, refrained from officially noticing; whether that means all is forgiven, or Peter didn’t have to ask, or all is not forgiven… well, that’s another set of speculations. When he leaves the room Peter is in high spirits, at least, so perhaps it can be inferred that whatever Bunter’s mien and posture was as he ignored the outstretched hand, it was not a rebuff.

And can I just say that this is one of the reasons I love DLS so much. There just aren’t so very many authors in my experience (especially those best known as mystery authors) whose books spark that much thought over one line of text, and for whom such speculation is so rewarding.

This Open Road text reads as a nice edition of the book, although peppered (as usual) with punctuation and transcription errors – but in checking text in another I find that it is sorely lacking in one thing: “This re-issue of CLOUDS OF WITNESS (which has received some corrections and amendments from MISS SAYERS) has for a Preface a short biography of Lord Peter Wimsey, brought up to date (May 1935) and communicated by his uncle PAUL AUSTIN DELAGARDIE.” This edition has the brief bio and heraldic information, but not the essay from Uncle Paul. It’s a crime that this is left out.

And of course I love the following so very much that I named a blog after it. In fact, let me go see if the name is available elsewhere … I’m not much of a cat person, but bompstable cats? Oh my yes.

But now he had really got the formula he wouldn’t forget it again. The connection was just there – close, thick, richly coherent.

“I’m charmed to hear it,” replied Lord Peter, with a friendly grin. “Had a good nap, old man?”

“I–what?” said Mr. Parker. “Hullo! Watcher mean, nap? I had got hold of the most important train of thought, and you’ve put it out of my head. What was it? Cat–cat–cat—-” He groped wildly.

“You said ‘The glass-blower’s cat is bompstable,'” retorted Lord Peter. “It’s a perfectly rippin’ word, but I don’t know what you mean by it.”

“Bompstable?” said Mr. Parker, blushing slightly. “Bomp – oh, well, perhaps you’re right – I may have dozed off. But, you know, I thought I’d just got the clue to the whole thing. I attached the greatest importance to that phrase. Even now – No, now I come to think of it, my train of thought doesn’t seem quite to hold together. What a pity. I thought it was so lucid.”

And, not to be repetitive, I love this:

Parker’s eyes wandered to the photographs. “I don’t believe it,” he said obstinately. “I’m damned if I’m going to believe a word of it.”
Woop – there goes Charles, I believe.

Like Loading...
This entry was posted in OT and tagged Clouds of Witness, Dorothy L Sayers, Lord Peter Wimsey. Bookmark the permalink.

3 Responses to With love and thanks to Dorothy L. on her birthday.