I’ll refrain from saying “I’m back” or anything like that; who knows what tomorrow will bring? My life has changed in oh, so many ways; I will also refrain from quoting “Tomorrow” in addition to “Yesterday”, and just say … topsy-turvydom does not make for good writing conditions. But I had this half-written, so…

I was pointed to an article about Jill Paton Walsh’s writing process for her DLS rip-offs – er, pastiches – – er, sequels, and it made me angry realize I hadn’t written a review of this thing.

On the phone from her home in Cambridge, the author, age 76, also said that this is likely to be her only flashback Wimsey novel. “I honestly don’t think Peter is that interesting without Harriet – the only exception being The Nine Tailors, which is such a good book it doesn’t really matter whether he’s got a consort or not.”

Ladies and gentlemen, this is the person with whom the legacy resides. Does anyone have a handkerchief I might borrow, because I think I’m going to cry.

Okay, so what is this thing? It’s a posthumous sequel, taking notes DLS made before she abandoned Peter for Dante and working them up into a complete novel.

As I was writing that sentence I had a sudden vision of this:

Despite Good Intentions, a Fresco in Spain Is Ruined

I remember when the first one, Thrones, Dominations, was announced – I was excited. Of course I was. (I was a little excited when I learned that there would be new Star Trek movies coming out – before I learned, the hard way, that JJ Abrams is the sort of man who likes blowing things up. Like planets. And fandoms.) I love Lord Peter Death Bredon Wimsey. But of course I wasn’t totally stupid, so I was worried, too; the online community I was part of at the time lamented that JPW wasn’t any of the people they would have chosen to try to fill DLS’s pumps. And in the end T,D wasn’t good… It wasn’t awful, but it wasn’t good. I think I actually kind of liked Presumption of Death, I’ll admit it.

It’s this book that makes me think of that poor, poor fresco’s “restoration”.

I made a lot of notes as I read, to the extent that I was driven to say “It’s not a good sign that I’m compelled to make notes at almost every percent marker so far.” I wasn’t exaggerating. I won’t squish all of those down into this review; suffice to say there were a lot of problems, and my notes started to reflect a few patterns.

One was this: “This is exactly like those tv episodes they put out now and then to save money and pad out a season or for a holiday or something – what are they called, clip shows? – where you’ve got a bunch of characters sitting around and reminiscing and the screen goes wavy and voila: there’s a scene from an old episode. Only I haven’t seen this tv series. I don’t think I’ve ever seen a book presented like a clip show before.”

They are called clip shows, and … this wasn’t done to save money, but … I don’t know. I’m at a loss as to why exactly this device would be used here – but watch any bad example on television, and you’ll find the similarities are uncanny. It doesn’t work in novel form. 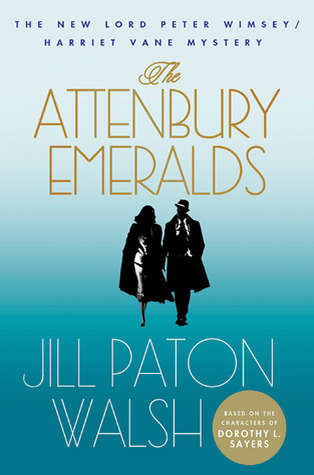 The first, and one of the most annoying things I made note of was that this was not the story I was expecting. I guess I had read “Attenbury Emerald” and thought “Yay, the story behind the tale in The Nine Tailors.” Um. No. My bad, actually; that would be the Wilbraham Emeralds. Oops. For some reason I had my mind set that that was Peter’s first case. Hmph. All right, but still, it leaves me with a question I noted in media res: “Attenbury asked me to see to Osmanthus’s little business with the jewels.” Why? Here’s Peter, young (31), not experienced with gemstones, not an intimate of the family, certainly not a known detective and probably not particularly known for his brains, given his usual behavior – and Attenbury lets him take charge?

Something I found both sad and funny was Harriet’s I-assume-unintended (?) role in the book: what I called a preemptive audience surrogate. Several of the things that raised my eyebrows, about which I was bound to make snarky comment, were – hilariously – addressed by Harriet. ‘I observe that you have a problem familiar to novelists. A large cast list to be introduced to the audience, and no reason why they should wish to know or remember any of it until the story starts.’ (This was irritatingly true – and needed different punctuation.) ‘It was no moonstone, you mean,’ said Harriet. (Though the story was beginning to sound AWFULLY familiar.) “Unless you have been making half of this up, you have an extraordinary memory. How long ago is all this?””Thirty years….” (Always a problem when someone is supposed to be telling a story within a book, especially when it’s the story of something that happened a long time ago: when the tale-teller uses what appear to be word-for-word quotes, rather than saying what a person would actually say when telling a story, something more like “So then we wandered back to the house, and he told me about the conversation he had had with her, and I had the feeling he was hiding something when he said she wouldn’t tell him about that day”.) Time after time JPW anticipated my snarky remarks by basically inserting them into Harriet’s mouth. The question being, why didn’t she just avoid the issues in question in the first place? It wasn’t cute; it was annoying. Also annoying was that this was almost Harriet’s only role in the book: Greek chorus.

Bunter seemed out of kilter for much of the book. Not that any of the characterizations were as authentic as I’ve seen in some fan fict– not by a long mark – but Bunter in particular was as off as a haddock in the noonday sun. The rest of the characters were either unique to JPW (excepting notes from DLS which we peons haven’t seen) or felt like caricatures, but Bunter just hurt. There were grammatical errors – and Bunter would as soon appear in his boxers as abuse the English language. At one point he makes a comment about blood and guts – in front of Harriet – and doesn’t excuse himself. I can*not* see that happening.

This is going to sound elitist, or … I don’t know, I’m sure someone will manage to find it objectionable – but the reading level, or the comprehension level in the JPW books is always much lower than anything DLS wrote. As I understand it, DLS didn’t give half a flying fig whether her readers could read French – or Greek – or Latin – or could understand half the allusions she larded into her writing. She wrote it as she wanted, she did not dumb it down, and while I have been known to feel stupid while reading DLS I utterly respect her choice not to pander to the lowest common denominator. JPW… either panders, or is not able to aim higher. Which is fine; faking it would be obvious, and a huge mistake. Some of the Jane Austen sequels or *shudder* rewrites have proved exactly how disastrous it can be to invite direct comparison between the writing of one of the greats and someone trying to fill their shoes.

Not that JPW isn’t already doing so by trying to write Lord Peter novels in the first place. But perhaps it could be considered a mitigating factor that she doesn’t try to ape DLS’s style.

Some of the instances of the non-DLSness of the style:

“All the girls like pearls’, I said foolishly.” – My note: I take it this isn’t a quote from anything, which I expected it to be, but just use of the rhyme. I’ve understood most (all, I think) of the allusions and quotes so far … Which, when it’s supposed to be Lord Peter, is not a good thing. ‘But a man may smile and smile and be a villain, and all that.’ – Referenced twice. And ‘Alas, my love, you do me wrong’ forsooth.

There are some unfortunate errors or awkwardnesses sprinkled throughout the book. Example: the hideous Mrs. Duberris castigates Peter for “footling around”; only a couple of pages later, he passes a remark about going to “footle around a bit”.

Peter says ‘I thought Attenbury would bust a gasket.’ I wasn’t able to pin down an etymology for the phrase, to see if it’s period-appropriate, but to me it doesn’t really matter. It doesn’t feel like something Peter would say. Just like some of what was put into Bunter’s mouth. Completely off.

Peter: “She married one of her trainers, rather late – she must have been in her mid-thirties before she tied the knot.” Er, wasn’t Harriet about that when she married Peter?

The worst, the very worst error came at about 7%. “Lord Wimsey”. Multiple offenses. My monocle popped right out.

No, actually, and in all seriousness, possibly the worst offense in the book came at about 24%. “I think, you know, it was the earliest example of that nausea you know all too well….”
‘For how long,’ said Harriet sternly, ‘did you go to bed?’

Okay, now, here too. Peter’s revulsion at sending someone to his death, yes. But pulling up a thorough rotter who deserves to serve time? I don’t buy into that troubling him. And as for Harriet being “stern” about it… No. Never.

One last quote, and then I’ll wrap this up: “To her great annoyance, Harriet felt herself blushing slightly. ‘I don’t compare with Conan Doyle, or Agatha Christie, or Dorothy Sayers,’ she said reproachfully…” This could, perhaps, be author insertion rather than audience insertion. But, sadly, the author doesn’t seem to feel that way, nor DLS’s estate.

There’s already another JPW “LPW” out. Will I read it? *sigh* Probably. But it’s starting to feel like when I was seventeen, and a new Trekkie looking for more fuel for the geeky fire, and snapped up every Star Trek novel there was. It took me years and probably fifty books to realize that the vast majority of it all was complete and utter garbage. I am beginning to be of the opinion that no one should ever be given the rights to touch another person’s toys. They tend only to break them.