I am required to say: This audiobook was provided by the narrator at no cost in exchange for an unbiased review courtesy of AudiobookBlast dot com. So I’m really, really happy to be able to also say that the narration was far and away the best part of this book. The plot and story had a fair number of issues fighting with nice characterization and fun dialogue (and a setting of Hartford, Connecticut – my backyard), but the reading – by Becket Royce (and now I want to be named Rebecca so I can go by Becket) – was one of the best I’ve listened to in a while. Character accents were present without being overwhelming; humor was nicely accentuated; best of all were moments such as when the text mentions someone giving an unladylike snort… and Becket Royce complies. I have a new go-to narrator.

So, now, the book itself. I should be slamming it with three or even two stars. I saw just about everything coming light years away – what was wrong with Mary, and which of the two men courting our heroine Concordia Wells was a bad’un, and the secret behind the enameled dagger. This is not because I was being clever – I’m never clever at guessing who dunnit and whatnot – but because all of this was telegraphed with great clarity.

The plot also relied heavily on clichés. If you haven’t ever read a book or watched a television show before, this might be a spoiler: when someone told Concordia that there was something very important they had to tell her – but they didn’t want to tell her now, they would meet her tomorrow … well, really, how many books or tv shows have there ever been where that setup actually resulted in the person showing up at said meeting and imparting the very important message? (I should start a list.) (I’m very surprised not to be able to find this on tvtropes.com; it’s almost “Lost In Transmission”, but not quite…) 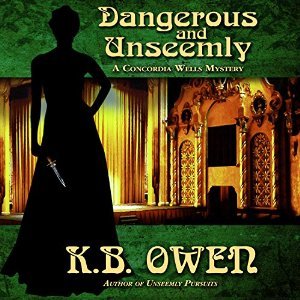 Something that was odd about that situation was: “The doctor was of the opinion that [Sophia] had not been outside [in the rain] for long.” But … she was an hour late for her meeting with Concordia, which is why the latter went looking for her (in the rain). If she wasn’t attacked on her way to meet C, then when? Was she dragged outside after being conked?

The writing – in terms of well-chosen words strung together to form pleasing sentences free of grammatical errors – wasn’t perfect. There was at least one example of “lay” for “lie”. And the scary, scary note left pinned with a dagger – “Beware – next time a real stabbing could happen!” – really isn’t very scary. But aside from these quibbles and the larger problems mentioned above, I was happy listening to Dangerous and Unseemly – which is a great title, by the way. As mentioned, the dialogue was very nice in places, lively and life-like, and particularly fun to listen to. Blessings on author and reader for the fact that it was “mischievous”, not “mischievious”! I can forgive a lot for that. 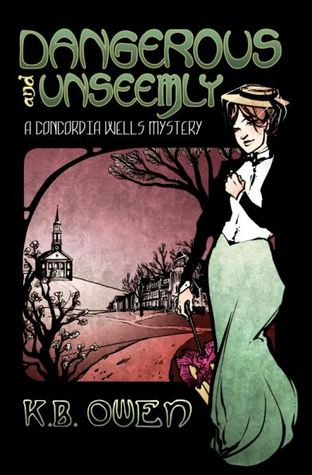 I enjoy a good historical mystery. (Does this class as a cozy? I guess this is a cozy.) I enjoy books set in boarding schools and colleges – such enclosed, self-contained environments. And I enjoy books set around theatre productions, particularly Shakespeare of course, and D&U features a student production of Macbeth. (I know someone who would be quite irked at the pronunciation “McBeth”; I forgave it.) (One line regarding that play started a little plot bunny for me: “Lady Macbeth still had a tendency to giggle during her sleepwalking scene…” That could totally be worked in.) I can’t really say this was a great mystery – the disparate parts of the plot (what happened to Concordia’s sister, the death(s) at the college) didn’t necessarily play well together.

I couldn’t help wondering if the author is a fan of L.M. Montgomery. Our heroine Concordia is a ginger, and puts up the familiar lament that a red-haired lady can NOT wear pink. And at one point she admires dresses with “gigantic puffed sleeves” and elbow cuffs.