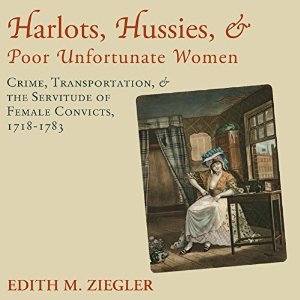 The required disclaimer: “This audiobook was provided by the author, narrator, or publisher at no cost in exchange for an unbiased review courtesy of AudiobookBlast dot com.” And thanks!

There are some potentially tremendous stories are, but listening to this reminded me strongly of reading a biography of Shakespeare: we know next to nothing, and what we do know consists of a) facts gleaned from impressive research into court records, wills, and contemporary letters and journals; and b) conjecture based on what is known about the subject, what is known about others, and on what was the usual case, weaving a book out of slender threads whether there are enough threads to support a whole book or not. Here, though, those potentially amazing stories are of a necessity passed by with the merest mention, presumably to a lack of data: either it doesn’t exist or Ms. Ziegler didn’t go down the rabbit holes. Case in point: the female convict/servant who “passed for a soldier at Culloden”. That is a monster of a plot bunny. (How interesting that tempting avenues of research branching off from the main topic and tempting plot ideas that crop up in the midst of other things are both named after rabbits.)

This book, and one I’ve read since in a similar vein, makes me better understand both the allure of and criticisms against a non-fiction author like Erik Larson, who spins the facts he scrapes together into a coherent narrative tapestry. This is wonderful to read: he is a very good storyteller. But it leaves an uneasy aftertaste: it’s a story more than a history. It’s easy to read his works and not pay attention to the frequent use of “must have been” and “could have been” and so on, and – without reading the acknowledgements – not realize that when Mr. Larson mentions that his primary subject saw a gull fly over one morning it is not because it is known that that person saw a gull fly over on that particular morning, but because when Mr. Larson went to that location for research he saw a gull fly over.

That sort of thing does not occur in this sort of history. This is pure Joe Friday “Just the Facts, Ma’am”. So, on the one hand, it’s fascinating and trustworthy… and, on the other hand, a bit tedious. It becomes a matter of quantity substituting for quality, in terms of depth; there are hundreds of records of trials, convictions, transportations, ads for runaways, wills, and so on that can be referenced and from which can be drawn inferences, but very few instances where one woman’s story can be traced from start to finish. Why did one woman steal a sheet? Who knows? Was rape as prevalent as my slightly queasy gut feels? Who knows? “Irish convicts came mostly from the county of Leinster” – why? Who knows? I wish there had been a way for the author to have followed up with household accounts and other owners’ paperwork for more information.

This is not in any way meant to denigrate Ms. Ziegler’s efforts. There is a tremendous amount of research here, and the necessity of dealing with common names, aliases (one woman had at least three), non-survival of records after 300 years and the lack of records in the first place. But something like this underscores the inevitable shortcomings of this sort of book:

“It would be interesting to know the fate of a black London woman named Elizabeth Jones who was indicted in 1735 for stealing a few items of clothing with an assessed total value of ten pence. She was convicted and sentenced in April, and transported to Maryland on the John in December of that year.” That’s a rather frequent phrase throughout, “It would be interesting to know” – including how the women (and men) fared during the Revolution, which is rather a big one: convicts, originally British, but cast out by Britain; where do loyalties fall? (Again: plot bunnies.)

The narrator gave this a pleasant, neutral reading… but it’s unfortunate, given the subject matter, that “gaol” (as in “Hertford Gaol”) is mispronounced as “goal”.

So, to sum up: this is a rather dry treatment of a fascinating subject, and had I worlds enough and time there could be any number of ideas for novels in there. I’m very glad to have had the chance to give it a listen.