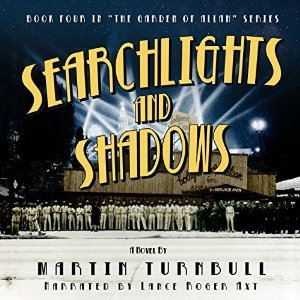 “This audiobook was provided by the narrator at no cost in exchange for an unbiased review courtesy of AudiobookBlast dot com.”

Isn’t it interesting how, despite (despite?) the Hays Code, racism, McCarthyism, homophobia and faux marriages, and a studio system which can harrow up thy soul, freeze thy young blood, Make thy two eyes like stars start from their spheres… still, Classic Hollywood was far and away, miles and miles, and many times better than contemporary Hollywood. I love the actors of this era and the films they starred in, so – especially taking in the WWII Homefront aspect – this book had a lot going for it.

I learned a great deal – Ogden Nash worked on The Wizard of Oz? Bette Davis declared complete integration for the Hollywood Canteen (actually, I learned everything I know about the Hollywood Canteen from this book, and loved it). Orson Welles in this period was dating a semi-literate stripper. I learned that Errol Flynn was tried for statutory rape (I’m still surprised I’d never heard of that), and everything about Alla Nazimova.

On the other hand, Bette Davis also had conversations with the fictional main characters, Errol Flynn had an affair with one of the fictional main characters, and Alla Nazimova was like a mother to the fictional main characters. Aaannd yes, here’s the complaint I often come out with about books like this: Well, here. Here’s the thing. My family has a tradition of mock-claiming celebrities with our name – Cousin Rod, Aunt Martha, Uncle Jimmy, etc. James Stewart barely rated a mention in this (wrong studio)(no – he was MGM. How odd), but if my name was, say, Novarro, or Welles, or Mayer, or Flynn… I would be a good deal less tolerant of this book. I have to admit the backstage-Hollywood perspective was fun… I also have to admit I was a little squeamish about it. I might have preferred that all the characters were like the inserted fictional actors that starred in the fictional “William Tell”… I know, I’ll stop now.

The writing was alternately fun and exasperating. I loved the line “That bitch will take a powder so goddam fast you’ll be tasting Max Factor clear through to next week.” It still makes me smile as I write this. There was a metaphor involving a bank robber that was kind of awesome. There was very heavy use of simile and metaphor – and not all of it was this successful. There were a number of misplaced modifiers and suchlike, and sentences like “I suppose she won’t be the first staff member we’ll lose” which … I don’t think that means what you meant it to mean.

My response to: “It’s taking all of my will power not to lean over and kiss the cotton-pickin’ dickens out of you” – was “take me, I’m yours”. / sarcasm.

The celebrity characters, as I mentioned, made me a bit uneasy. I was never sure where the line was between “this happened” and “made up by the author” (and then of course when you factor in “this was a fiction created by the studio” it just gets a little hairy). The main characters were strong; I understand how those who started with the first book could feel that these folks were good friends. I’m not sure I adored them enough to go back and start from the beginning, though. For one thing – not a definitive thing, not a deal-breaking thing, just a thing I didn’t like – I kept raising my eyebrows as Gwendoline wandered the world taking notes, not admiring the clothing she comes across and planning to use it as inspiration so much as … planning on ripping it off. Moral ambiguities I can work with; I didn’t much care who the characters slept with, or who had what black market dealings. But this was disturbing.

The narration was equally alternately fun and exasperating. Characters were given distinctive voices that kept them identifiable – and, I’m happy to say, the stars were not read with an eye (ear) toward impersonation. For those with distinctive mannerisms, Mr. Axt hinted rather than going full-on Rich Little, and it worked beautifully. However, there were some pronunciation issues that did not work. “Brassiere” was pronounced “brasserie”; director George Cukor’s name is consistently mispronounced “cookur” (see: www.oxfordlearnersdictionaries.com/….. it’s “Bowdlerizers” and not “Bowlderizers”; and, dammit, the word is NOT pronounced mischievIous. (ETA: Mr. Axt let me know in an email that when a character mispronounces the word “epitome”, it is the character’s ignorance and not the narrator’s, as I expected.)

So: fun, but I don’t expect to continue with the series.

One last eyebrow-raiser, proving perhaps that either monks led a very different lifestyle in 40’s Hollywood, or the author’s control of language might not be exactly what he thought it was: “For the longest time, Marcus doubted he was any good at this “boyfriend” business, and had almost resigned himself to a monk-like life with the occasional encounter.”