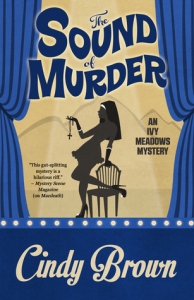 There’s a line from Shakespeare that occasionally runs through my head at appropriate intervals: “I am amazed, and know not what to say.” (Midsummer, Act 3, scene 2) This book was one of those about which, six seconds after I hit “request”, I thought “Oh, that was a bad idea.” Despite some of the reviews I wind up writing, I really don’t choose books in order to bash them. I want to like books. I want to love books. And, after all – a mystery set around a production of a musical combining The Sound of Music with Cabaret? Come on. At the moment I hit that “request” button I was thinking “Oh, fun!” That too-late thought was “Wait… that can’t be good…”

It was good. It was so good. And it was so much fun.

I kept making comparisons to a non-Netgalley freebie I read last year. I disliked that book intensely. The funny thing is that The Sound of Murder shares a lot of superficial features with that book. Both are first-person narrated cozies. Both main characters work part time for relatives who are private investigators. Both are young and attractive and, while not stupid, not Mensa material, either.

But here’s the thing. I disliked that main character, intensely. I loved Ivy Meadows, silly stage name and all. The former physically resembled Marilyn Monroe, and I should have done a search through the book to see how many times that was mentioned. The latter doesn’t believe she’s gorgeous (but has great legs and knows it). The former was a nurse playing detective; her actual career got no attention in the book at all, and she made a hash of her attempt at investigation. The latter wants to be a investigator, and is happily confident that she’s good at it – but she also wants to be an actress, and is confident in her talent there too. And she’s aware of the conflict there. The former galumphed through her days complaining about how she was treated and – oh, everything. The latter danced. Literally.

She had flaws; she was aware of her flaws; she worked with her flaws. She treated everyone with respect – even the people she wanted to throttle. Where I wanted to stab the other heroine with a stiletto heel, I wanted Ivy to knock it out of the park.

I can almost hear someone out there saying “Okay, you liked it, but five stars? Really?” Yup. I could read this sort of thing all day, every day. The writing was completely enjoyable. The book was completely enjoyable. The mystery aspect was a fresh one, to me. Is it a serial killer, or is it a rash of suicides? I’ve never seen this demographic of victim, exactly, nor this sort of solution. It wasn’t filled with gritty realism, this book – but it was genuine. I bought into it whole-heartedly. All of the characters were nicely drawn. The settings were vivid; I’ve read so many cozies where the place the characters live and work is nothing more than a name. And the twinned milieus of P.I. office and dinner theatre were so nice. I do love a theatre backdrop. In short, it did everything I want a book to do, and a few more things, and then sang a few songs. 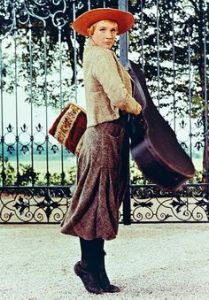 Speaking of which, that mash-up of Cabaret and the Sound of Music? Hilarious. With a side of really sweet. And you can sing the songs. Score. (I can’t help but mention here that I once wrote a mash-up Lord of the Rings and The Sound of Music. I know whereof I speak.)

And there was a dog. Nowadays it’s hard for me to read about dogs (or hear about people’s dogs. Or see dog food commercials). But I loved this dog.

“I never had a pet—too messy, my mom said. The depth of feeling people had for their dogs and cats had always baffled me. Sure, animals were cute and fuzzy, but c’mon, weren’t they just substitutes for real relationships? After half an hour of unconditional love from an animal who barely knew me, I now understood how real that connection could be. Lassie had sat with me and cuddled me and looked at me worriedly while I cried. The pug had wormed his curly little butt right into my heart.”

Been there. Done that. Miss it more than I can say.

The first book in the series features a production of a circus-themed Macbeth. I am amazed – but I do know what to say. I’m saying I want it.

Like Loading...
This entry was posted in books and tagged Cabaret, Cindy Brown, Cozy mystery, NetGalley, The Sound of Murder, The Sound of Music. Bookmark the permalink.