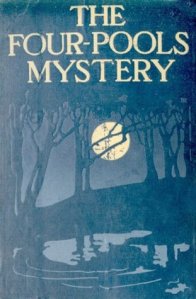 Jean Webster is better known for Daddy Long-legs, which I loved when younger and was a little disappointed in when older.

Take the amount of disappointment I felt in Daddy Long-legs, multiply it by about thirty, and sprinkle generously with shock and horror, and that’s how The Four-Pools Mystery left me.

There is mystery; there are ghosts; there is the cocky city boy swanning in to solve the mystery… there is rampant unchecked racism. “If you have ever had anything to do with negroes, you can know the state our servants are in.” At least in that sentence the less pejorative “negroes” was used. That is not the case, half the time. “Sho’s yuh bohn, Marse Cunnel; it’s de libbin’ truf I’s tellin’ yuh. Dat ha’nt has fotched dat chicken right outen de oven, an’ it’s vanished in de air.” Sho ‘nuf. “One of them shambled forward….The creature was bare-footed and wore a faded suit of linsey-woolsey” … okay, that’s enough. No – one more: “When he was in good humor, he was kindness itself to the darkies”. Wait, one more: “…With an oath he cuffed the fellow back to a state of coherence”. Guess the skin tones of the cuffing and the cuff-ee. But that’s okay, apparently, because “In the first place it comes natural to < “n-word” redacted > to be whipped and they don’t mind it.” Well, that’s sho ‘nuf fortunate considering Southern plantation history. 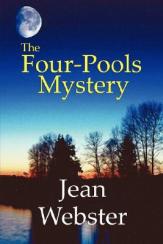 Context: The book was written in and apparently set in 1908. That doesn’t make it a palatable read over 100 years later. Political correctness is one (not always good) thing; this is several others.

One review comments that this is the South from the point of view of someone who had never been there; it seems like in general Ms. Webster was writing about things she didn’t know much about. Someone tells the visitor, “There are half a dozen colts in the pasture just spoiling to be broken in; you may try your hand at that, sir.” Has the young person ever trained a horse? Ever? This does not seem wise to me. Apparently he doesn’t take the suggestion to try breaking any of the colts (yay for the colts), because he is still bored, and expresses a wish to go hunting. But “spring on a big river plantation is a busy season”. It’s also a season when you can’t – or shouldn’t – do a lot of hunting.

I have little memory of the mystery and its solution. The most memorable aspect of the story is the prejudice and language. Not fun, and not recommended.

Like Loading...
This entry was posted in books, mystery and tagged famous for another book, Jean Webster, mystery, The Four-Pools Mystery. Bookmark the permalink.