Long, long ago, in a fantasyland not that far away, I went to art school. I don’t do much with that part of my brain any more, but now and then I cherish fond hopes of doing a Victor Frankenstein on whatever talent I had/have (*kzot* “It’s alive!!”). Hence my interest in “Line”.

What I didn’t realize when I requested it, or when I started reading it, was that this was a Dover reprint of a book originally written in 1922. I mean, look at that cover. 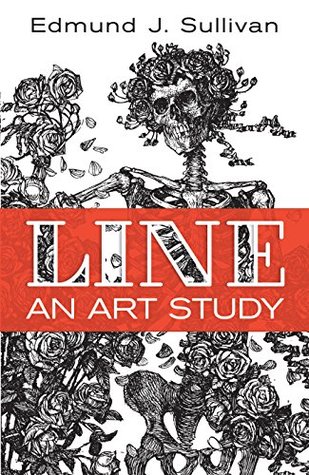 My first clue was – well, the language. Apart from that, which might just have been a stylistic choice, nothing really raised any suspicion that this wasn’t a new, slightly pedantic book. My ears figuratively perked up at his discussion of a “new” instrument that sounded interesting. I enjoyed the advice (“Altogether preferable to the stick charcoal is the Siberian compressed charcoal” and “Hard smooth forms are often best expressed by a swift line”) and opinion (“if an artist can become pleasurably excited about the handling of a tool, that tool is for the time being the best possible”). I learned that “etching” means “biting”, “and refers, not, as is frequently thought, to the use of the needle, but to the use of the acid.” And I enjoyed the glimpses of the author’s humor: “The present writer once ventured to introduce this definition of the two processes as “biting and scratching” into the draft of an official report; but it never got beyond the draft, being considered too vivid and undignified for an official document.

But then, all of a sudden, there appeared “the ‘n’ word”, used quite casually. That was a shock. Yup – definitely not a recent release.

If you can get past that, and can settle happily into the rather elaborate writing style, I recommend this highly. It made me chuckle; it made me want to go stock up on Siberian compressed charcoal and go sit in a field somewhere. That I didn’t do the latter is my fault. That the author used an unfortunately common-for-the-time derogatory isn’t really his.

Received from Netgalley for an honest review – thanks!