A Tower of Giraffes – Anna Wright 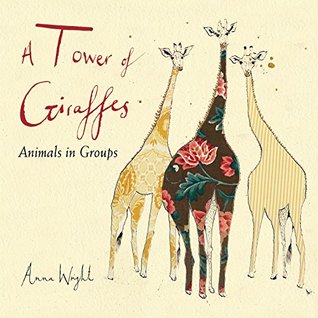 My first reaction to this book is chagrin. I’ve been planning pretty much this sort of thing in the back of my head for … well, for years, so I have no right to complain about somebody swooping in and taking the idea. Ever since I first started seeing mentions of James Lipton’s [book: An Exaltation of Larks] long long ago, I’ve collected and enjoyed these words used for collectives.

The artwork in this is marvelous – realistic, but with a jaunty cuteness that is extremely attractive (and kicks whatever I would have produced right to the curb). A mix of line, watercolor wash, and beautifully designed collage adds whimsy and kicks up the creativity. The only thing that could be better would be a sort of pattable book with swatches of actual fabric – but it probably wouldn’t work, because the pattern of each scrap is chosen carefully to work with the drawing (or the drawing is based on the fabric’s shape and pattern; it could be either). And the owls use feathers (in the most gorgeous way), which would be challenging. I want to rip off this whole style – but Ms. Wright can probably rest easy, since I’ll probably never get around to it any more than I did to writing my version of this book.

I think the only thing that keeps this from being a five-starrer is that I was hoping for more (or perhaps less) from the text. Without any basis for it at all, I expected it to be in verse. (Let’s see… “when horses gather together, we call it a herd… for a collection of sheep, then flock is the word”…) Something a small child, of picture book age, would enjoy having read to her, something the adult reader could deliver with varying intonations and maybe even funny voices. (You could totally read a page about pigs in a snuffly voice, and so on.) But instead each page gives the collective, then a small block of text about the animal which reads like a brief and slightly juvenalized encyclopedia entry. I haven’t spent all that much time around kids, so there’s every possibility I’m dead wrong, but I just don’t picture them being gripped by the text. Also, I would have loved to see the connection between the collective noun and the animal made explicit.

Example: “A Flamboyance of Flamingos … Flamingos are highly sociable and live in large groups – even up to

thousands of birds! These fancy feathered friends also work together to make theatrical displays by posing like ballerinas and marching in time to impress other birds.” Which is fascinating … but how many children will get the bigger words? And depending on the grown up to be able to define “flamboyance” might be asking a lot.

Still, it’s informative, and absolutely lovely to look at. I’d buy a copy of the dead-tree book, just for my own enjoyment.

The usual disclaimer: I received this book via Netgalley for review – many thanks!

Like Loading...
This entry was posted in books, Children's/YA and tagged A Tower of Giraffes, Anna Wright, children's, illustrated. Bookmark the permalink.