A Death in the Family – Maggie Mundy 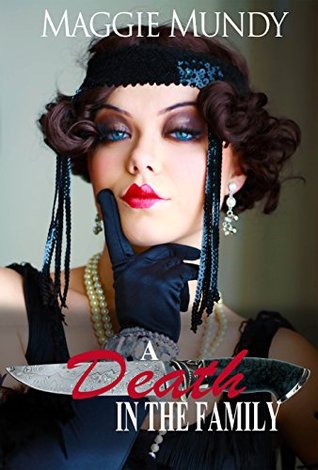 That was a rather large disappointment. Something about the combination of cover (why did I like the cover? I don’t know why I liked the cover) and description made me really want this book on Netgalley, made me really happy when I was granted access, and made me really sad when it turned out to be another in a long line of those books that give self-publication a bad name.

I really need to try harder to remember to check the publisher name before requesting.

As I have so very often said, there was something here; there’s actually a reason I gave it two stars instead of just one. The author has some ability with characterization, and was certainly able to keep the plot galloping along. Bad books are often slow reads, but happily this was not. Well, it’s short.

The problem is that any pluses in characterization are overwhelmed by over-reliance on cliché. And the plot that zipped along so fast was riddled with utterly ridiculous twists and revelations and dead ends. The Goodreads description reveals “This thriller involves Brazilian artifacts, heroin dens and cult worship.” So it’s no spoiler to talk about how utterly silly all of the above were in the plot. (And wasn’t that an opium den, not a heroin den?) The book begins with Annabel’s aunt being murdered in front of her – though no one saw a thing, which now that I think about it is a little odd that in the middle of a crowded New Year’s Eve party no one sees anything when the hostess is stabbed and pushed over a railing into the midst of the guests. Annabel was looking at her when she fell – how did she see nothing of the killer? Yet no one questions this, not even Annabel.

When the police show up for the murder, they discover a second body, that of a young Asian man. He is never identified until later, when Annabel asks about the servant. But he seems entirely forgotten for quite a while. Then more bodies are introduced into the equation, and oh by the way the coroner has a secret relationship he reveals to them out of the blue. (His introduction was entirely odd: “I am Julian Miller. The coroner, and what you probably don’t know, but I feel I need to inform you of something else because of what has happened”. Um – what?) Of course, he shouldn’t tell her any of what he tells her, but the police are remarkably absent from this case. Never fear, though; this book doesn’t follow along the lines of Sherlock Holmes, where the official detectives are stupid and completely shown up by the brilliant amateur. The amateur in this case utterly fails to ask even the most obvious questions, much less brilliantly detective-ish questions.

There were messages written on mirrors – I’m sorry, after the first one I would have a) made sure the police knew, and b) made sure my doors were locked. Also, c) would have been very confused about the last message, which refers in the future tense to something which already happened (and which was settled in a very quick, and very silly, manner.) Moreover, d) … the messages were left on two different mirrors, in Gwen’s home and Annabel’s flat. My first move on seeing the second message, or at least the first message in my own bedroom, would have been – well, no first would have been calling the police (which Annabel never did); second would have been locking the doors, bedroom and outer (ditto) and/or changing all the locks (ditto). And putting a chair under my bedroom door’s knob. Maybe a dresser slid in front. Third would have been sitting down and thinking over who had access to both mirrors. Which would have ended the book a lot earlier by revealing the culprit. Of course, if the silly little twit never did lock a door, that rather opens up the field. To EVERYONE.

And then there were the ghosts. I suppose the point of the ghosts was to confirm things for Annabel and perhaps point her in the right direction – but I found them a silly added extra in a story already frilled with extraneous nonsense. Aunt Gwen pops up immediately – and I do mean immediately – after her death to basically give Annabel a push, then says she has to go; other ghosts come and go and are more or less communicative (one seems more like a residual haunting than the interactive Gwen), and then she pops back in again. Usually if a ghost says she has to go, she doesn’t come back. But trying to apply logic to this is a bit silly.

The “solution” to the mystery was one of the most god-awful silly things I’ve read in a while.

And, yes, even though it was an ARC I’m going to talk about the grammar, punctuation, and use of language, run-on sentences and close-but-not-quite words. I entertained minor fantasies of reworking the whole book, correcting the problems, but soon the task just seemed too big.

“Annabel walked over to the nearest lamp and held up the pebble. This was no pebble”. Then why refer to it as a pebble?

“I’m not tough enough to be policewomen” – Few people are tough enough to be multiple personalitites. But a couple of characters seem to be duplicated: “An hour later with food in their stomachs and dressed in fresh clothes, she felt so much better.”

“She wondered how his father was fairing” – is he a carnival barker?

I’m making a collection of entertaining typos, and (having reached the point where I must either laugh or cry over the awfulness of the editing) I enjoyed “surly” for “surely”. Ditto “which made her rejection easier to bare.” I’m not sure what to think of “Annabel was surprised Isaac had been so demonstrable” (Idtimwytim*), and “drugged out emaciated individuals longing” is wrong in both the typo version and what I’m guessing it was meant to be. Do you really want to say that “drugged out emaciated individuals” are lounging about? Synonyms: Lazing, loafing, relaxing, idling, dawdling… seems a bit comfortable for someone who is both starving and requiring a fix.

“Last night when my aunt died her ghost appeared asking me to solve the murder. Then this morning there was a message on my aunt’s bedroom mirror. I’ve never seen a ghost before, but I wasn’t afraid.” – Was that middle sentence supposed to come at the end, perhaps?

And then there are the sort of conversational moments, which feel like transcriptions of exactly how someone might say something … but which aren’t, you know, correct. “For now she would drink and be merry, well if not merry it would deaden the emotions somewhat.”

In short, the hero, Isaac, is a cardboard romance novel cliché, the wounded warrior. The heroine is a cardboard and poorly executed ripoff of Phryne Fisher, with an ill-conceived paranormal element stapled on. The plot is a mess. The writing is sloppy. And why, oh why would you give your book a title like this? For one thing, it’s already being used by a very famous novel. For another, it’s also being used, word for word, by something like two dozen other novels (I stopped counting around 22, and that was only on page four of twenty pages of search results), not to mention some 350 or more books with titles very close to “A Death in the Family”. Are you trying to let your book be unfindable? Not a great sales practice. (On Goodreads, this particular “A Death in the Family” finally shows up on the fifth page of search results. Not good.) This book was provided by Netgalley for honest review, and unfortunately it goes on the list of Netgalley Regrettables.

Like Loading...
This entry was posted in books, mystery and tagged A Death in the Family, Maggie Mundy, mystery, NetGalley. Bookmark the permalink.

2 Responses to A Death in the Family – Maggie Mundy