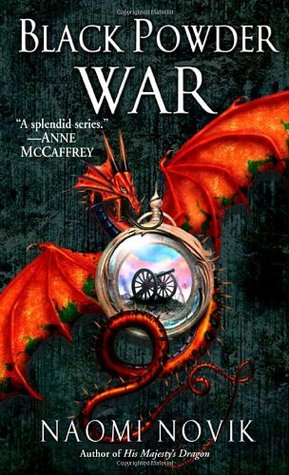 And on to the third in the Temeraire series. The story picks up close on where the last left off, with our scaly hero in China – until his captain, Will Laurence, receives orders to go pick up three dragon eggs from Istanbul. The orders raise questions: for one, why them, when there are dragons closer? But an order is an order, and haste is required if, as they come to understand, one of the eggs is not far from hatching, and Laurence scrambles together his crew, leave behind their transport ship, find a guide who will hopefully be reliable, and head off.

These books – as I’ll probably repeat if I get around to reviewing the others – are quintessential Boys’ Own Adventure Stories. Action! Adventure! Battle! Dragons! Exotic locales, fierce fighting, loyal crews struggling against a worthy foe, surprise enemies and surprise allies – it’s like something Robert Louis Stevenson might write. If he’d written about dragons.

In this one, though, the nonstop action begins to become repetitive. Laurence just can’t catch a break, and it starts to get a little old, to be blunt. I’ve always ground my teeth a little through the movies and books where Our Hero gets shot and beaten up and hit by a car and blown up and thrown out a window and beaten up again, till at the end he’s limping and hugging broken ribs and only seeing out of one eye and covered with blood – but he still kicks the bad guys’ butts! ‘Cause he’s the Hero! Okay. This is a bit like what happens to Laurence. In every book. And when it’s not Laurence being hurt it’s Temeraire. And when they’re not being hurt they’re being tangled thoroughly in bureaucratic red tape. Taken here and there and now and then these are fun books. Read one after another, they tend to become repetitive.