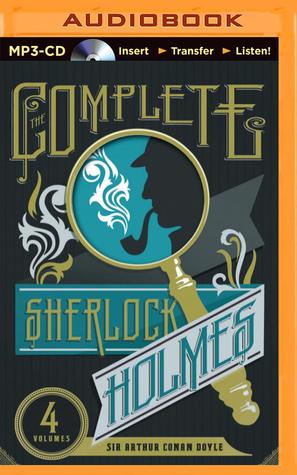 As it turns out, I don’t like Sherlock Holmes very much. The idea? Some of the writing? The kernel of the character and Watson and 221B and Mrs. Hudson and so on?

Absolutely. Holmes himself and his mysteries?

I’m sure it was in some small part down to the fact that I listened to the entire blessed Holmes canon in an Audible “Complete” edition. I was happy about it, because it was narrated by Simon Vance, who has done such a magnificent job voicing Holmes in sequels by other authors. And I can in no way fault the audio. Simon Vance was excellent (except when he tried to sound American). The production was dandy. It just … seemed… endless.

And apparently I had never read some of the canon before. I was under the impression I had, but I can state for fact that when suddenly “A Study in Scarlet” wandered off (for an eternity) into what was supposed to be the American Wild West… put it this way: if I had been reading this in print I would have been constantly checking the number of pages until the story got back to where it should be, Victorian London. It wasn’t terrible – but dear lord was I uninterested.

Then it happened again in “The Valley of Fear” – in some ways, almost identically: good man mixed up in a cult of heartless killers, but prevails to win the love of his woman – and I thought I’d lose my mind. Again, it might not have been so bad on paper, but listening to these two stories set in a poorly imagined and (I love you, Simon Vance, but) rather horribly accented America was stultifying. Too-late note to all the dead British authors I’ve been reading lately: all Americans didn’t speak like that. (And, particularly, black Americans did not speak like that.)

The biggest thing I find I do not like about Sherlock Holmes, the canon, is… Sherlock Holmes. I lost track of how many times listening to these stories that I muttered “You bitch!” under my breath. He is an obnoxious piece of work, Holmes is. Yes, of course he’s brilliant. Yes, of course he is capable of levels of observation that most people are not. Know how I know this? BECAUSE HE TOLD ME. Over and over. Usually in the context of pointing out to someone either how pathetically inferior a third party was – or, often, pointing out to someone how pathetically inferior THEY were. Tact? Not Holmes’s strong suit. To put it mildly. In fact, by the end of this long slog I decided that Holmes’s strongest character trait was not his skill at observation or deduction but his pure hubris.

He swans through these stories pointing out how he has developed his skills by working at them and honing them – and then constantly uses that as a brickbat with which to pummel those around him, especially the police, and most especially Watson. Modern adaptations aside, as I listened to his arrogance in his dealings with the police I kept picturing him in the setting of a modern non-Holmes adaptation cop show. Ever seen the tv show Blue Bloods? I’m picturing Donny Wahlberg’s character faced with Holmes’s high-handedness and insistence on primacy and contempt for everyone operating at a lower level. (Try it – it’s funny.)

And, in the end, it hit me: where exactly did all this much-touted supremacy get him? If these tales purportedly selected by Watson are the choicest among Holmes’s non-classified cases, I’m … not impressed. Where Holmes’s gifts seem to be most showcased is in his introductions to clients and police, and in showing off for the always admiring Watson: you came in on this train, you have a medium-sized dog, you play the harpsichord. But his case track record … isn’t great, is it? I don’t have the time or energy to run down the list to make an accurate count, but I was astonished at the number of cases in which Holmes’s client does not survive the story. It seemed to happen over and over – nice young man comes to 221B, frantic and afraid; Holmes tells him all about himself before letting him tell his story, during which Holmes acts bored; Holmes tells him that yes, there is some interest in your story, I’ll get around to it in a day or two, keep me posted on developments; young man goes off reassured that the great man is on the case (rather than utterly pissed off over the way he’s been treated), and shortly dies. Then and only then does Holmes descend from his ivory tower to find the killer.

Then there were a surprising number of cases in which Holmes does not actually contribute that much to discovering the solution to the mystery. Facts emerge independently of anything he does, or someone confesses, and he stands back nodding smugly – he knew that.

And even in the cases where he does put his finger on the Bad Guys … they have a terrible tendency to get away. Of course, in those cases the finger of justice smooshes them like bugs – their ships sink or they otherwise pay the Ultimate Penalty.

All in all, though, the main reason I dislike Holmes is his treatment of Watson. Dr. John Watson is a man who served his country in war, was wounded, became a physician good enough to build a booming practice … but when he is around Sherlock Holmes he is like a bullied child anxious not to be left out. Holmes abuses him regularly. He consistently denigrates Watson’s “little pieces”, which he writes to glorify his friend (and possibly for a few extra pounds, but the only reason he ever mentions is that he wants to publicize his friend’s abilities); they are ill-written, unnecessary, concentrate on all the wrong things, and really he doesn’t want publicity, he works for the sake of the work. But he obviously preens himself over the praise, and it sure felt like when Watson gave up the writing Holmes was a little put out. Oh, and then of course after years of Watson saying “Well, fine, write ’em yourself”, Holmes finally does – and spends a good deal of time saying how Watson would have done it better. (Ah, but did he ever say that to Watson? Pfft.)

In several cases Holmes sends Watson off to gather information. And the good doctor works his stolid behind off trying to follow Holmes’s methods and cover every base. Only for Holmes to tell him A) a blindfolded chimpanzee could have done better, but B) that’s okay because Holmes did it himself anyway. In some of these situations Watson was taking time away from his wife and his medical practice to oblige his friend – because any time his friend crooked a finger said medical practice and wife dwindled in importance – and the whole time was wasting his time.

The last point in this part of my rant is a large part of the “love” in my love-hate relationship with BBC’s “Sherlock”. Holmes disappeared two years ago, allowing the world – and Watson – to believe he was dead. And he pops up at John’s side in a ridiculous disguise, and expects his old sidekick to be nothing but happy. In the tv episode, John knocks him down. And I couldn’t agree more. For two years – two years – starting on that very first day the “Reichenbach Fall” happened – Holmes has left his best (only) friend to grieve, and grieve he does, book and tv series. On tv he sees a counselor. In the stories he just eats his heart out, replaying if-onlys. And the reason he is left in pain for two years? The same reason Holmes didn’t share vital information with him other times: in the great detective’s opinion Watson is not a good enough actor/liar to pull off a situation where he knows the truth. And okay, I get it: Holmes was in danger, and playing dead seems to have been necessary. But – really? “I almost told you but I figured you’d blow it”? I’d like to pop him in the nose myself. (“I have given you a serious shock by my unnecessarily dramatic reappearance.” And suddenly Sherlock Holmes morphs into Captain Obvious.)

The phrase “healthy relationship” was not in common usage in the late 1890’s and early 1900’s. This relationship? Isn’t healthy.

(However, I begin to understand where all the ‘shippers come from. “Intimacy” had a different tenor then, but Watson does say it an awful lot. And Holmes does seem to grab his hand, put his hands on the doctor’s knees, and whisk his friend off into dark corners an awful lot. The Empty House: “Holmes’s cold, thin fingers closed round my wrist and led me forwards down a long hall … There was no lamp near and the window was thick with dust, so that we could only just discern each other’s figures within. My companion put his hand upon my shoulder and his lips close to my ear.” That’s a quote that launched a thousand ‘ships.)

Something else that stuck with me all through the stories: all of these illustrious clients come to Holmes, requiring utmost confidentiality … with Watson sitting there to the side taking notes?

Now that it’s (finally) over, now that I’ve (finally) listened to all the stories… I feel a little like the child at the end of The Emperor’s New Clothes: “But…” Holmes isn’t naked, but pretty close, and spinning some tassels and waving some feathery fans to distract the reader.

And I wholeheartedly apologize for that image, especially to anyone with Jeremy Brett or Basil Rathbone as the Holmes in their head. Cumberbatch fans probably enjoy it.

2 Responses to The Complete Sherlock Holmes – read by Simon Vance