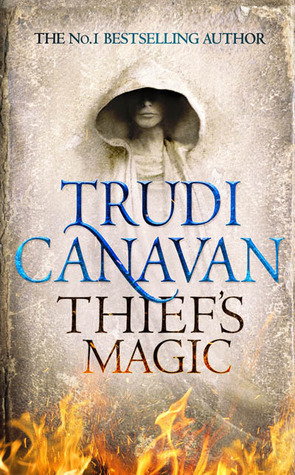 That was rather disappointing. It’s listed at 560 pages, so I expected it to take some time … And it probably didn’t take as long as it seemed to take. But it was another book that felt like it took forever.

It’s an interesting set of ideas. There are two parallel and alternating stories, one of Tyen who is a student of magic at the Academy and one of Rielle who is a dyer’s daughter in Fyre where only priests and angels are allowed to use magic. Canavan has created an interesting system of magic, being something that is pulled from the environment like water, leaving a drought when too much is used, renewing itself by some means that is not fully known, and leaving when it is used “Stain”, a black residue that hangs in the air like soot after a fire, the size of the smudge indicating the amount of magic used. For Tyen, Stain is something that must be managed, as magic cannot be pulled from within the city lest any of the machinery running off magic – like airborne vehicles – be incapacitated; for Rielle Stain is something she isn’t supposed to be able to see, as only those who can use magic can see it, and only priests – all male – are allowed to use magic.

Tyen’s story is kicked off when, investigating an ancient tomb, he discovers Tom Riddle’s diary.

Well, no, not really, but: “No word marked the first page, so he turned it. The next was also blank and as he fanned through the rest of the pages he saw that they were as well.” Thought I: “UH OH”. “A mark had appeared. Next to it a dark patch formed, then dozens more. They spread and joined up. Hello, they said. My name is Vella.”

And this is when I began to shout at my Kindle “DROP THE BOOK! DROP IT! BURY IT! BURN IT! RUN AWAY”

But it’s okay, apparently. It is just like Tom Riddle’s diary in that it responds to questions asked, including those not asked aloud (which, sorry, creepy, especially in the beginning), but it is – apparently – not evil, or part of anyone’s soul. (As far as we know.) What it actually is is … Vella herself. She was human, some thousand years ago, and was turned by an evil sorcerer into this volume … And by turned I don’t mean *poof-you’re-a-book* turned. Nope. Nothing remotely that quick or pleasant.

Despite the obvious Harry Potter echoes, I enjoyed the adventure at first. (Although it was frustrating that Tyen asks a dozen questions, but somehow never “Whose tomb was that I found you in, and how did you end up there?” I still don’t get that; I wonder if it will ever be relevant, or if that poor old skeleton was just an anonymous plot device.) Tyen’s discovery of Vella, then his hasty flight from hostile locals and his return with his colleagues to the Academy; Rielle’s abduction by an illicit magic-user and her subsequent involvement with a young artist who helped rescue her (yay) and with said illicit magic (uh oh). It’s a fun story… in the beginning. I especially liked the moral conflict Tyen went through with the book: turn it in? Keep it? What’s best for the Academy? For Vella? For himself?

It’s when things are taken out of both our hero’s and heroine’s hands that, for me, the story began to lose steam. Both Tyen and Rielle are left to their own devices, and their devices are not entirely up to the challenge. Tyen is confused and tentative, and rather inept; Rielle is timid and afraid and, at least the way I’m remembering it, doesn’t seem to take any action of her own accord, reacting rather than acting. I begin to realize why there are so many extremely feisty heroines out there. The obstacles that stood in the way of each of them seemed to me to be either improbable, or improbably easily dealt with (especially given the level of competence of each).

The writing was a minor issue. Lines like “Floating above the stain was a disturbance. Stain.” – weren’t the norm, but such awkwardnesses were common enough to be annoying. And then there was “You’re not using ‘you’ in the second person, are you.” Er. Um. I can only hope something like “Would he lay with Famire” was fixed before publication.

I’ve owned a few books by this author for some time, picked up ages ago at a sale and never really sampled. I was pleased to try this book on Netgalley, as an introduction to her writing. And … I have to say I’m still not in any huge hurry to go find those books now.

Like Loading...
This entry was posted in books, fantasy and tagged fantasy, NetGalley, Thief's Magic, Trudi Canavan. Bookmark the permalink.