The Lightness of Dust – M.L. Weaver 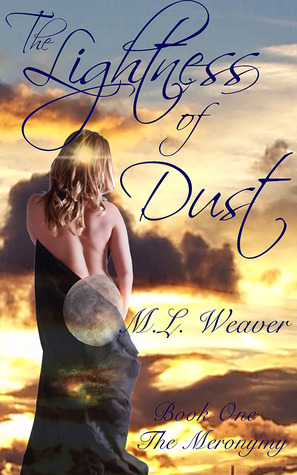 “Follow the thread as mortal cares scatter with The Lightness of Dust.”

This was a strange one. I received it as a LibraryThing member giveaway (thank you), and had some trouble getting my hands on it (my fault, I’m sure), and pestered the author because the premise sounded fascinating … and … I … er…

The book description does a pretty good job of making the story sound alluring. But it also made it sound like there is more of a flow between and among the three story lines. And I just didn’t see it. Those three threads, as mentioned in that synopsis, center around a couple named Sam and Lily in the 40’s, a young woman in ancient Anatolia, and a professor named Jake in the present, and that right there felt a little off. I don’t recall if there was an explanation as to why the centuries between “ancient Anatolia” and 1940 were not included; obviously it would have been awful to have hundreds of threads tangled together in the tale, but it might have been very cool if there had been glimpses into other times.

My middling rating of this may be, at least partly, a reflection of the fact that the book was very different from what I expected rather than the quality of the book itself. I didn’t like it; it centered on an almost mythical character who combined unexplained great power and Captain Jack Harkness-like refusal to die with a cranky petulance that makes Honey Boo Boo seem like a model child. (I don’t know, is Honey Boo Boo really that bad? I’m going only by hearsay here…) (Wait, never mind, I don’t want to know.)

There, that’s my problem with the story. She is petulant, and vicious, but there’s no pattern to it. In the 40’s she seduces Sam, acts as his muse, and breaks his heart – she is like a Greek goddess, unknowable but desirable, dangerous but of great benefit to a man she likes, until she grows tired (or wary of the fact that she is not aging visibly as she ought to be). Then in the present she works her way into Jake’s life, and displays a very different personality – and both are very different from the original one she owns in ancient Anatolia. And none of them are pleasant. She has reason to be bitchy in her original life (ill treatment and youth), but the modern-day personality is so different from, and so much more vindictive for very little reason than, the 1940’s persona, it’s just … odd. This falls into the category of “I wish I liked this more than I do.”

Like Loading...
This entry was posted in books, fantasy and tagged fantasy, LTMG, M.L. Weaver, The Lightness of Dust. Bookmark the permalink.