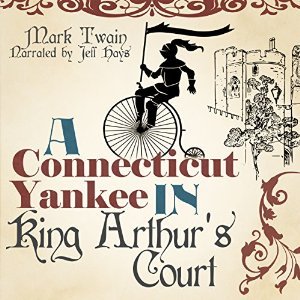 While I’ve long been a fan of the man Mark Twain, and know a good bit about him (living in Connecticut, it’s almost hard to avoid the latter), I just haven’t ever read much of his work. Or, you know, any. I’m not sure why, and I’m kind of surprised at the realization. In any case I was pleased to see A Connecticut Yankee in King Arthur’s Court in my Audiobookblast.com email, and I ran with it.

And it was utterly not what I expected.

In all honesty, it was a difficult story to listen to, especially in the beginning. First off, there was a little problem with the narration. Jeff Hays does an excellent job; I enjoyed his performance. His female voices were quite good – I loved Sandy. But. “Connecticut Yankee.” Connecticut: not a southern state. Very nearly as far as you can get from being southern. And Hartford? Almost as far north as you can get within Connecticut. And “Yankee” is pretty much the definition of “opposite of Southerner”. As mentioned, I live in Connecticut, so of course I know we don’t have accents at all. So… why in this recording did Hank have a marked southern accent? He sounded like … Mark Twain.

Of course, Twain wrote him with a southern accent as well. Some Yankee characteristics were mentioned in passing, but more often than New England references came references to … well, Arkansas. Though Hank’s biography as he’s introduced never takes him out of Connecticut, his slang – and his lassoing talents – are very un-Connecticut. (Trust me: you’d have to work hard to find somewhere to learn to throw a lasso around here. Even in Twain’s time Hartford wasn’t exactly wide open plains.) Example: Hank compared Sandy to a prairie fire. Something else we don’t have much experience of hereabouts: prairie fires. Or prairies.

I raised my eyebrows that he had never heard of Camelot but knew about the June 21, 528 eclipse down to the minute (never mind the whole changeover to the Gregorian calendar that made a hash out of dating prior to the sixteenth century).

But that’s not the real reason I had problems listening to the book. I grumbled a little, but the main problem was all those years I’ve invested into learning and loving the Arthurian legends. The first person Hank meets in Camelot is a mounted knight (Sir Kay) who charges at Hank. Which: no. A mounted knight who lived by the rules of chivalry would never attack an unhorsed man. Not ever. Under any circumstances. At all. That wasn’t a good beginning.

Chivalric divergences aside, Twain’s facility with the language of the Middle Ages felt convincing (“Give ye good den”) … but in a way that just makes it worse. Because his version of Camelot just hurts. I like the fairytale. I liked the brilliant jewel tones of Howard Pyle’s vision. The place where no one would ever say something like “It might bring her back to life. None that be so good and kind as ye are would do her that cruel hurt.”

Twain is well known for his incisive and sardonic point of view, and it’s all through Connecticut Yankee. The target: 19th century politics; 19th century romanticism; Luddites; 19th century lifestyle in general – you name it. I get it. I do. I was just apparently born without the satire gene.

When I was about sixteen and at my most romantic and alarmingly impressionable, I saw Richard Harris in Camelot. I think it could be safely said that it had a major impact on my life (not necessarily for the better). (It messed me up, actually.) But I really, really prefer to cling to the Camelot where there’s a legal limit to the snow, where rain may never fall till after sundown. One brief shining moment. There’s no glory in the here and now, nor in Connecticut Yankee, and I was conditioned at a young age to need it. I’ll take the “fleeting wisp of glory Called Camelot”, any day.

Thank God I didn’t read this then.

I was provided this audiobook at no charge by the author, publisher and/or narrator in exchange for an unbiased review via AudiobookBlast.com.

I found this bit particularly interesting…

Intellectual “work” is misnamed. It is a pleasure, a dissipation, and is its own highest reward. The poorest paid architect, engineer, general, author, sculptor, painter, lecturer, advocate, legislator, actor, preacher, singer is constructively in heaven when he is at work. And as for the musician with the fiddle-bow in his hand who sits in the midst of a great orchestra with the ebbing and flowing tide of divine sound washing over him – why, certainly, he is “at work”, if you wish to call it that. But lord, it’s a sarcasm just the same.