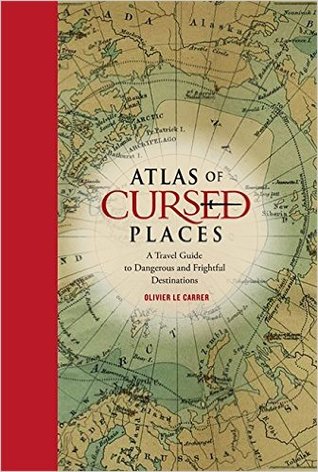 I love the idea for this book: it’s a travel guide to forty places you don’t want to find yourself in, because for various reasons – geographic location or man-made catastrophes, literal ghosts or the phantoms of past events – they are “cursed”. It will help you avoid that unscrupulous travel guide who tries to lead you astray, the introduction says. But … well, there are a couple of buts. One: But are there really very many people who would obliviously let themselves be led into Aokigahara Forest in Japan (also known as The Suicide Forest, also known as the place where Natalie Dormer is going to be haunted in The Forest) without knowing it’s a bad, bad place? Or into Jharia, which from Google Images looks a whole scary awful lot like Mordor?

And … But it’s not really an atlas. There are maps – they are the primary illustrations in a heavily illustrated book – but they are mostly, if not entirely, antique maps. They’re not the only illustrations … but the rest of them are rather randomly placed sinister clip art – skulls and skeletons and so on. Some of the latter take up half a page. There isn’t a photograph in the book – and if there had been, if this had been lush with photos of these places (“Wow! Jharia looks just like Mordor!” “Holy cats, look at that cloud of bats in Kasanka National Park!”), and – as the huge majority of other reviews I’ve seen already have said – it would have been a wonderful book. (It would also have very likely cost more than $24.99.)

But … The writing was often entertaining – but (sorry, can’t help it) as another reviewer out there said, there was often very little on the places I was most fascinated by, the places that seemed to fit the cursedness of the title best, and a whole lot on places that neither interested me nor seemed to deserve to be called “cursed”. It’s intriguing that birds die in their thousands in Jatinga – I can see that fitting into the premise – but does Nuremberg really deserve to be called forever blighted because the Nazis made such use of it? Is Adams, Tennessee forever to be avoided because of the Bell Witch incidents in the 19th century? And so on.

As so many others said first, this was a great idea, and a beautiful book as far as it goes. But …