He Taught Me To Hope – P.O. Dixon, Pearl Hewitt 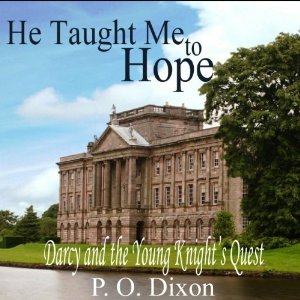 Jane Austen continuations or reimaginings are always problematical. Just like fan-fiction in general, or unheralded self-published books, or Star Trek novels, there is now and then a gem which makes the hunt somewhat worthwhile.

Not too often, however.

He Taught Me To Hope falls into the category of reimagining, depicting an alternate universe in which Lizzie, wildly in love, married a lad against her father’s wishes, had a son, and lost her young husband to an accident before Darcy ever had a chance to come into the picture. It takes some getting used to. Mr. Bennet holds a grudge against her, though he has allowed her to come back to Longbourn with her child. And now she has allowed herself to become engaged to Mr. Collins. No, thank God, not that Mr. Collins – believe me, it threw me off mightily to hear him described as “tall, handsome, kind and respectable”. No, in this universe the Collins we know and despair of, William, has a brother, Jeffrey, who is a widower with twin ten-year-old girls. (He’s still a Mr. Collins, though, so one can’t expect too much from him.)

Star Trek novels often seem like science fiction manuscripts the author had already written but couldn’t sell until he did a Find/Replace, putting “Kirk” where his captain’s name used to be, and making the science officer’s ears pointy and removing contractions from his dialogue. And honestly that’s a bit how I feel about He Taught Me To Hope. Most Every part of Pride and Prejudice hinges entirely upon the Bennet girls’ prospects. To so drastically alter Lizzie’s situation throws everything else off, and it is no longer P&P.

More, though, is … well, the same problem I used to see in those pseudo-Trek books. Characterization halts and falters. Point: I don’t think Mr. Bennet would behave this way – not without a much deeper grudge against Elizabeth. As far as I recall, as far as I read, there was no believable reason for his continuing anger. Point: Jane suddenly has a desperation about her which was never evident in the original, and it’s painful. Point: Elizabeth is pushed out of the spotlight by her extremely precocious son, but what there is of her just doesn’t feel right. Nothing I can put a finger on at this remove, but the weird combination of inattention and smothering she shows the boy seems odd. She practically drapes herself all over him when he is beside her, lets him get away with murder – but would be unable to say where he was for something like twelve out of every twenty-four hours.

I don’t make any secret of the fact that I’m not over-fond of children, and I find extremely precocious children completely noxious, at least in fiction. And Ben (short for Bennet – nice try, Lizzie) is so ridiculously precocious I wanted to throttle him. Jeffrey Collins – along with others – gives the opinion that the kid is too headstrong and unruled. He’s right. “He had not been impressed with the child’s behavior on their outing.” “A child must know his place.” I think Jeffrey’s censure of Ben’s behavior and Lizzie’s maternal style is meant to help the reader dislike him. On the contrary: I agreed with him whole-heartedly. It’s cute for a minute when Ben declines to provide his real name, maintaining his guise of Lancelot. When it goes on indefinitely, it’s a discipline problem. And … seriously. A five-year-old who says “moreover”? I need a Tums. And I’m afraid the narrator’s little-boy voice began to get right on my last nerve. Her narration otherwise was excellent – but the constant piping of the Ben voice drove me away.

What caused the single star rating, though, was Darcy. I feel like I should put that name in quotes. Okay, so in the actual book, there is a phantom of an engagement between him and his cousin Anne. It’s nothing either of them set into motion; as I recall it was something their mothers wanted from the time one or both was in the cradle. Here, though? Sitting beside what might be Anne’s deathbed, Darcy makes a promise. It’s half-hearted; he regrets it the instant it’s out of his mouth; he doesn’t mean it; he doesn’t want it; he rather obliquely proposes to try to perk up the spirits of a cousin for whom he has little patience but a fair amount of guilt. (Surprise: it works.) But he says the words. And then he flees, and evades, and gloms onto Elizabeth. And he makes such an aggressive play for Lizzie that he makes the most brazen girl in all of 19th century literature look like a wallflower.

I found the writing a little troublesome now and then – things like using “disinterested” when it should have been “uninterested”, for example. And if I had heard the words “fierce stallion” one more time (especially in the baby voice) there might have been mayhem. And the romantic moments between Elizabeth and Darcy … oh my. “Elizabeth felt an uncontrollable quivering pulsation as they locked hands.” “The intoxicating heat that radiated from their nearness…” My heart be still. Wait, that’s not my heart acting up – it’s my stomach. It was nauseous. By the time I quit (because I did quit, not being that masochistic) it was just about the halfway point and Elizabeth was still havering and quivering. Darcy was pursuing – not courting, but definitely pursuing – an engaged woman. Misunderstandings abounded. I couldn’t take any more.

I was willing to ride out the intro, to get used to the altered universe. I like that stuff: what happens to the picture if you shift the focus or alter the lighting, just change one thing? But at a certain point, when it’s not just one thing changed but one thing after another after another… it ceases maintain any connection with the original. And when the connection with the original is kind of the whole point – else why name your characters Elizabeth (nee) Bennet and Fitzwilliam Darcy and so on? – then … well, the writing had better be powerful.

I received this via Audiobookblast.com in exchange for a review. I wish I’d liked it better – or at all – for my part of the bargain.

Like Loading...
This entry was posted in books, Chick lit and tagged Audiobookblast, He Taught Me To Hope, Jane Austen, only not, P.O. Dixon, Pearl Hewitt, Pride and Prejudice. Bookmark the permalink.