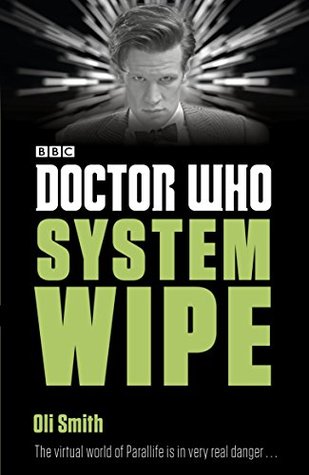 I used to read a lot of Star Trek novels, back in the day, until I finally grew tired of the high percentage that used Star Trek trappings without achieving the atmosphere, the ambience, the characterization of the original – – all the things that made Star Trek such a part of my life. But there were a number of really amazing books in the series, the ones that felt like unfilmed episodes, that nailed the characters’ voices and the feeling of living and serving aboard a Constellation class ship. (That’s the stuff I always loved, show and books: where would I go when my shift was over, where would I eat and get a new book and sleep and recreate?) So I kept reading ’em … and maybe it’s not surprising that Doctor Who novels spark the same ambivalence. Except I haven’t read as many, and I don’t think I’ve ever read one which got it just right. (Not even Ben Aaronovitch’s, so far.)

Still, there were three available through Netgalley, and I figured … what the heck.

System Wipe is an Eleventh Doctor adventure (which for me is a small strike against it – far from my favorite Doctor, him). He, along with Amy and Rory, arrive in Earth’s future to find it apparently depopulated, and discover a virtual reality which has taken on a life of its own – but which is being decimated. And of course the Doctor flings himself into the situation to fix it.

“‘But how does that –’ Rory began, but Amy interrupted him.”

I don’t remember being that annoyed on the show with her interrupting him so much. By which I mean constantly.

The Doctor: ‘I’ll shut up now.’ Uh, no. I’ll take “things the Doctor would never say” for a thousand, Alex. Especially Eleven.

I really would love a novel that takes a little time to explore the TARDIS. That’s what I would write. But no – everyone’s in a huge rush to leave the blue box.

Like Loading...
This entry was posted in books and tagged Doctor Who, NetGalley, Oli Smith, System Wipe. Bookmark the permalink.