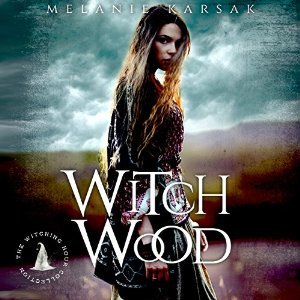 But it’s a different angle on the zombie apocalypse, for once, which is pretty remarkable considering the sheer number of angles that have already been covered. This is the story of the beginning of the troubles (which has been done, but which I tend to enjoy); the central character is a teenaged girl (which has been done also, in fact in something I listened to not long ago (though that was simply apocalypse, sans zombies)). This girl, Amelia, basically survives the falling apart of things because she is a practicing Wiccan (and that would be the different take).

In my decrepit old age, teenaged enthusiasm can be a bit wearing, and Amelia’s passion for her Craft is that. She is enthusiasm personified, and unafraid to exhibit it. For me it was a little difficult to swallow when she confabbed with trees and shrubbery (though in point of fact a little more information would have gone a long way there; the trees responded, in a way, but if it had been more useful or functional I would have been more accepting of it). When her energy feels strained, she informs the listener, “I needed to get back to the house and drink some chamomile tea and dab myself with a couple drops of lavender oil.” Of course you did. It didn’t help that her prayers and inner comments were recorded with an echo effect.

In addition to being a virtuous white witch, she’s a rather holier-than-thou vegetarian (which can be truly obnoxious) (and vegetarians NEVER get sick), and obviously she’s very green:

A lone truck swerved around me, the driver shouting something incomprehensible out the window. Drivers always seem to have some odd contempt for bicyclists, like we reminded them that they should be biking or walking or doing something other than polluting the earth with exhaust fumes.

Well, no, it could be that he had to swerve around you and was unhappy about the possibility of a teenager-shaped dent in his truck. That’s usually my reason. And depending on the type of truck he’s driving and why, he might not have a choice. It’s a little hard to carry, say, lumber on a bike. Truly, while I honor any attempt to make the world better and the “harm none” credo, none of this makes for actual sanctity, nor does it necessarily make a stance of righteous piety palatable.

I’ve seen the fandom in the social media, so when she tells her friend that for Halloween “I was thinking Harley Quinn” I was less than shocked. Anyway. There she is with her friends looking forward to college and dances and so on … but there’s a “flu” epidemic going on, and it’s only getting worse. Much worse. And I admit it was a little poignant to read about their plans, knowing and all.

I’m not sure the – what was she, sixteen? – year-old voice felt too authentic. High-school-esque phrases like “loaded with” abound – repeated often – but I’ve been trying to remember if I knew what a bandolier was at that age. The narration was good (except for that echo effect), though Amelia’s speaking voice was higher and girlier than the rest; I suppose that’s supposed to imply that adult Amelia is telling the tale.

I did like that the Craft gave the girl the ability to see the plague, and that she has a true healing power; she alleviates some of her mother’s symptoms early on. But it bothered me that, while she took literally a moment to lay a protective spell on a friend, she didn’t do it for her best friend – or for her beloved mom, who is a nurse at a hospital overrun with “flu” victims.

Amelia has a part-time job looking after an elderly woman in the titular estate Witch Wood. The girl suspects Madame Knightley might have a touch of the Wicca about her herself, but she’s never admitted it. Which may or may not make sense. (What may also not make sense is that there is only one entrance to the mansion. I lived in a fairly small house my whole life, and there were three doors to the outside world. I mean, if the place was built more than a hundred years ago, which was my impression, there would almost certainly be a servants’ entrance, at least) This is what Amelia believes will be a safe place when things really begin to hit the fan, and basically the entirety of the plot is her leaving early on to check on her mother, and then trying to get back with companions. There’s some interesting stuff that goes on, but it all ends rather abruptly. The novella, part of a series, can be read by itself – it’s a separate storyline altogether – but the end makes it all basically a promo for the next book. A bit frustrating.

Less-than-stellar bit: “The handle had been carved with unusual markings” … “‘That’s unusual,’ I said.”

I was provided this audiobook at no charge by the narrator in exchange for an unbiased review via AudiobookBlast.com.