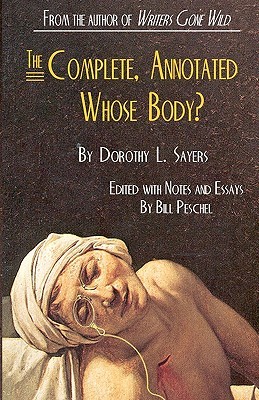 It finally became clear in my mind about halfway through this edition of WB that … Whose Body is in the public domain in the US. Therefore just about anyone can take it and annotate it or otherwise adapt it, post it on Amazon, charge whatever they want, and even take co-author status.

This does explain why the annotations here are so wildly varied. It’s fascinating, in a deeply irritating way, which vocabulary words the “editor” chooses to highlight with footnoted definitions.

That being said, there is a lot of good stuff in the annotations. Some are rather obscure words, I suppose –

Salmis of game: Cooked pieces of birds — partridges, grouse or quails, for example — arranged on a plate with gravy (made from the bones, trimmings, skin and general odds and ends) poured over it. Another version calls for the game to be cooked most of the way through in the oven, then cut into joints, placed in a buttered sauté dish with mushrooms and sliced truffles, cooked over hot water for a half hour, and served on bread with gravy.

(Who else is hungry now?)

… some are meant for the clueless American:

Before the United Kingdom shifted to a decimal form of currency in 1971, with 100 pence equaling 1 pound, it used a complex system that was as rich in tradition as it was baffling to the outsider. Basically, 20 shillings made up 1 pound, and 12 pennies (or pence) made up 1 shilling. Hence, 240 pennies, or 480 half-pennies, made up 1 pound. Complicating the system was the existence of special coins, including guineas (1 pound plus 1 shilling), crowns (5 shillings), half-crowns (2½ shillings), florins (2 shillings), farthings (one-fourth of a penny) and mites (one-eighth of a penny).

(Which is VERY useful.)

Rum: An odd or surprising event. In use since at least the 19th century, when it appeared in Dickens’ “Pickwick Papers.” The meaning of rum as a modifier has flipped since it appeared in the 16th century, when it meant fine, clever, excellent or strong. A rum-bit, for example, was a clever rogue; a rum-mizzler an expert thief; a rum-ken a popular inn or brothel and a rum-topping a rich headdress.

(Which I sort of knew – anyone who’s read any Golden Age British mysteries or E. Nesbit knows “rum” – but not in that detail.)

…and yet he fails to include a notation on tea preparation:

“Mrs. Munns, who was just making tea from a kettle which had gone off the boil”

(For me, tea is boiling a kettle and pouring the water right away over a teabag, or if I’m feeling expansive into the leaf reservoir of a teapot. What is it to Mrs. Munns? I’m honestly not sure.)

… Some are period British slang; some … are neither, and I continue to be just baffled why Mr. Peschel felt they needed explanation.

Before electronic chirps or snatches of popular songs summoned you to your smartphone, a bell inside the phone rang to indicate an incoming call.

(Seriously? Or is that just getting all condescendy?)

Some are just very neat:

Pussyfoot. William E. “Pussyfoot” Johnson, an American prohibitionist. As a U.S. special agent in the Indian Territory (and when it became a state, Oklahoma), he earned his nickname for his cat-like raids on gambling saloons, bars and brothels, earning more than 4,400 convictions during his three years in the service. He toured the U.S. and Europe extensively on behalf of the Anti-Saloon League. During his 1919 temperance campaign in Britain, medical students caught him and paraded him through London on a stretcher before police rescued him, but not before he lost the sight in an eye from a flying object. Abstinence advocates became known as “pussyfooters.”

Charles Garvice. The James Patterson of his time

I found it extraordinary that a term like “higgledy-piggledy” is given space and explained, but not “conducing”. Nor “What on earth are you doing, Peter, sittin’ there noddin’ an’ grinnin’ like a what-you-may-call-it?” What do they call it? There is no consistency to the notes – as above, “pussyfooters” is given a detailed paragraph which sheds light on a term on which I didn’t know needed light to be shed, but when the Dowager Duchess says ” or something about puss-in-the-corner”, the note on “puss-in-the-corner” does nothing to clarify a phrase I’m unfamiliar with. And some seem off to me; “mare’s nest” didn’t seem to fill the bill, and the phrase “was even beginning to find her range” is attributed to cricket when I would have assumed gunnery. (Maybe gunnery took it from cricket.)

Another one which sounds very interesting but which I question a bit is “brick”, as in “You’re a brick for doing that!” To wit:
A kind, reliable person. The phrase was inspired by a story the historian and biographer Plutarch (c. 46-120) tells about King Lycurgus of Sparta, who didn’t believe in building walls around the city. When the ambassador from Epirus asked why, he received his answer the next morning, when he was awoken and taken to a field outside the city. There, he saw the army of Sparta drawn up in battle formation. “There are the walls of Sparta,” King Lycurgus told him, “and every man is a brick.”

And while some notes feel quite scholarly, “Rolled bandages weaved from lint” is neither correct (“weaved”?) nor explicit (how??). Some repeat themselves (as in “Niagara Falls”). And some are just plain wrong:

Sayers chose Peter and combined it with the elegantly playful Death – pronounced to rhyme with “teeth.”

And he missed at least one note: page 55 – “Take the fool away, gentlemen.” Which is from Twelfth Night.

This review (or whatever you want to call it) is meant to focus mainly on this edition and its annotations, but I do want to make one foray into discussing DLS. Here is Lord Peter on one of the victims of the book’s plot (not the dead one): “They’ve got a man down startin’ on it—little beggar called Thipps—lives with an aged mother in Battersea—vulgar little beast, but quite good on angel roofs and things, I’m told.”

You’ll notice the word “little” used twice in one rather run-on sentence. I belong to a Lord Peter discussion group on Yahoo, and in recent conversations about Whose Body that descriptor resulted in an animated and surprisingly heated series of exchanges. Everyone, you see, refers to Thipps as “little” – and whether that is meant with condescension, or even contempt, and how much, and whether it’s classist or from some other cause … is still undetermined. The opinions ranged from feeling that it was a reference to the fact that he actually is a physically small man (though how Peter would have known that in the above quote I don’t know; had they met yet?) to the fact that though he is a respectable architect he isn’t exactly Christopher Wren, and so is “a little architect”, to … it’s utterly patronizing and not very kind. The last kind of strikes a chord with “vulgar little beast”.

Which would add a huge dollop of humor to this line from the Dowager Duchess: “‘She’ll be delighted to see you again, Peter. You remind her so of Mr. Thipps.'” Heh.

Okay, two forays. I hadn’t remembered that it was right here in the first book that I already would have started to become very, very fond of these characters. The DD is magnificent (and named Lucy). And Bunter?

“Thought we’d had the last of these attacks,” he said. “Been overdoin’ of himself. Asleep?” He peered at him anxiously. An affectionate note crept into his voice. “Bloody little fool!” said Sergeant Bunter.

My cold and frozen heart melts.

And Peter himself … the disinterment and graveside post-mortem is a grueling, heart-rending scene, beautifully handled, so that Peter’s stress is the reader’s.

Okay, more than two forays, in the vein of what I’ve come to call INNTB: “I Never Noticed That Before”. I’m fascinated by the idea that someone’s (Freke’s, I believe) man-servant “belongs to the same club as the Hon. Frederick Arbuthnot’s man” – man-servants have clubs too! And Peter, to Gerald: “You may come to want me yourself, you never know.” I wonder if that’s foreshadowing, or made DLS think “hmmm…”, or purely coincidental.

And what do you know – Peter would have fit right in on Goodreads: “I see red if anybody questions my judgment about a book.”

Part of the annotation includes biographical information on both Dorothy L. and her creation, and there’s some good stuff there. And it includes one of my favorite quotes:

“At the time I was particularly hard up,” she wrote, “and it gave me pleasure to spend his fortune for him. When I was dissatisfied with my single unfurnished room I took a luxurious flat for him in Piccadilly. When my cheap rug got a hole in it, I ordered him an Aubusson carpet. When I had no money to pay my bus fare I presented him with a Daimler double-six, upholstered in a style of sober magnificence, and when I felt dull I let him drive it. I can heartily recommend this inexpensive way of furnishing to all who are discontented with their incomes. It relieves the mind and does no harm to anybody.”

In the end, I’m not sure the annotations were any real value added. The errors cast doubt on the notes I was unfamiliar with, and – as mentioned – I was left wondering about a few things I might never have questioned in earlier reads, but did when I had been led to expect clarification. An annotated Lord Peter is not a terrible idea, but it’s a little worrying to me when done like this.

Like Loading...
This entry was posted in books, mystery and tagged annotated, Bill Peschel, Dorothy L Sayers, mystery, Whose Body?. Bookmark the permalink.

3 Responses to The Complete, Annotated Whose Body? – Dorothy L. Sayers