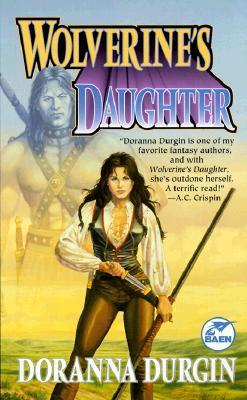 I’ve been a casual fan of Doranna Durgin for a long time, and I’m always suckered into interested in her books when they pop up on the LibraryThing Early Reviewer lists. I won this a long, long time ago, and it suffered from the havoc my life disintegrated into… I’m playing catchup now, sheepishly and with apologies.

Kelyn’s mother dies, and while she grieves she is also freed up to go explore the world. She figures part of that exploration will be to find her legendary father, known as (duh) the Wolverine, whose permanent absence Kelyn has always resented. Armed with a staff and her perpetual clumsiness, she sets off – and almost immediately finds herself rescuing a pair of children being menaced by a slaver. Through the children she becomes involved with the Traders, who bore a strong coincidental resemblance to Robert Jordan’s Tinkers, and through the Traders becomes entangled in a bloody witch hunt which seems to be a cover for some other kind of hunt…

My prevailing impression of the book was of plain and straightforward writing. I don’t remember other Durgin novels very clearly (it’s been a while), but whether that is simply her style or whether it was intentional for Wolverine’s Daughter, it works here. Kelyn is a considered a barbarian by everyone she meets – dressed in rough clothing, barefoot when she can be, simple of speech and uncomprehending when people exercise linguistic gymnastics on her. She has no patience for metaphor and poetic reference. The narration matches this, and after some of what I’ve read lately it took me a little while to get used to it.

The plot was a smidgen predictable, with everything clicking into place exactly where it ought to and no tremendous surprises. No real character growth, either, now that I think of it; Kelyn leaves home with one mindset, meets new people and has new experiences and is exposed to new ideas and new ways of doing things – and meets her father, which isn’t really a spoiler, because that’s the whole point of the book – and yet at the end the main difference in her is that she has adapted to footwear more often than previously. 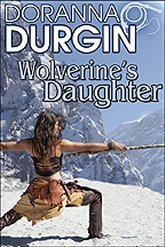 Something that drove me a little crazy about the plot is that much of it hinges on Kelyn being blamed – and blaming herself – for something that was not her fault. She is given a caution toward the beginning of the book – a very unspecific caution. She absorbs it and alters her behavior accordingly. It turns out she does not alter it enough, and inadvertently causes major trouble. And everyone hates her guts because of it, and she is consumed with guilt because of it – and it’s ridiculous. What she was told was so vague that I don’t see how she could have known to do any different, especially as uninformed as she is about just about everything; it was like a child being told to be careful around a stove because it’s hot and they might get burned, instead of being told to NOT TOUCH THE STOVE because it’s hot and they WILL get burned. I would have been a little easier with the situation if Kelyn had reacted with indignation – “Well, you didn’t tell me!” … but she didn’t.

Still, all in all, it’s a good, solid fantasy read, with a fairly likeable heroine and a truly nasty villain. Enjoyable.

Again, this was won from LibraryThing’s Early Reviewer program for an honest review.

Like Loading...
This entry was posted in books, fantasy and tagged Doranna Durgin, fantasy, LTER, Wolverine's Daughter. Bookmark the permalink.