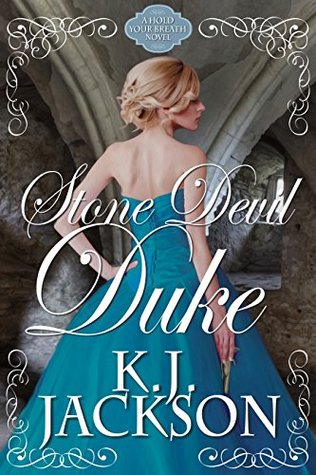 I made it just halfway through this. I have no idea what all those five-star reviewers were reading; not this. It can’t have been this. You can’t really blame me for the length of this review; about half of it is highlighted quotes from the book. Blame K.J. Jackson. (I do.)

This … is the story of Lady Augustine (Aggie) who is trying to single-handedly find the men who ruined her father’s life, and her own. (At about 16% I made my bet on who the ringleader was. At about 27% I won the bet.) Naturally, she must do it alone (except for the boy she involves, who ends up beaten, which of course she considers justification for her decision and not the result of collective stupidity). Naturally, this involves dressing up as a man and driving a coach through the worst streets of 1819 London.

She considered pretending to be a prostitute, you see, but decided against it. She’s not a complete idiot. Almost, but not quite. “I know you think I am stupid—an idiot for doing all this on my own.” See? She’s also self-aware.

And one night she fails to persuade a man that she isn’t actually the coachman for hire she’s pretending to be, and a duke gets in her cab. Naturally enough they’ll fall in love, after he assumes she’s a slut and tries it on with her. (Another night a group of men hops into the coach and she can’t get rid of them – not a great disguise, huh, hon? – and they (along with everyone else) fail to notice a large number of bullet holes in the vehicle. Well, they’re drunk.)

I have serious problems with books like this. The synopses always sound like they’ll be fun – and in other hands they would be fun. The serious problems pop up when I expect, oh, I don’t know, acceptable writing. Why is that so difficult to find?

Language, and the use thereof throughout the book, is … odd. English-not-as-first-language odd. “Devin bit off a blaspheme”… Can you do that? “His own annoyance had blown past his usual even keel”. Pushing a metaphor a little too far, that. “Her face had fallen to the ground once more at his outburst.” That had to hurt. Did he push her? Or … did it fall off? “I will not impose another dollop on your good will.” Is that the unit of measure for imposition, the dollop? “The fact that women got his bed, and no proposal, never bothered any of them.”

“Taking a different inference” … “to decimate her plans”… “Catapulted her into whirlwind of indignation” … “I need to request that we not be seen cavorting with each other.” Are you planning on cavorting? “Digging down to the bottom [of the closet], an exasperated smile appeared” What an odd thing to find in a closet. “Onto her knees, she pulled a wooden box from under her bed.” “Devin found himself clear to make it to Killian.” He “nicked Sunshine along” … Sunshine’s a horse. I don’t know what is being done to it. “…She had barely escaped being mugged—or worse—from an unscrupulous patron.” From? “Introductions and requests to land on her dance card petered in” – Land on? And petered … in? No. Just … no. “…Could not have just talked to the Devin.” The? “Right behind her, his sudden heat blanketed her bare shoulders” … “…Lips still wispy on hers” – Is he a ghost? “Both arms wrapped around her, strangling her air.” “She hit a big black wall of no memories.” I mean, really.

“Much of the blood about the gash was dried, falling from her touch.” In half an hour or less?”

Here is a quote truly awesome in its wut??-ness: Aggie: “Blazes bite your ass, sir. Only a hell-bound rogue would sneak onto a lady like that.” I don’t even know where to begin. I could do a thousand words on that quote alone. Starting with: if you just cried out “blazes bite your ass”, you’re a) no lady, and b) very confused. Or this: “She blustered a look that reeked of pity” Um. “Bluster” is, to me, related to sound. “Look” is of course visual. And “reek” is olfactory. Pity is pretty much intangible. Come on.

“The pit in her stomach expanded. The pit of failure.” The pit of despair… I get where she’s going with this, but isn’t it more along the lines of “a knot in the pit of the stomach”? The pit being…oh, look: “a slight depression in the midline just below the sternum (where a blow can affect the solar plexus)”. If that’s expanding, this girl has a medical problem. Or… is she pregnant? No, she hasn’t been forcibly deflowered at this point yet.

Another: “As unfortunate as the garden ended, I must admit I did enjoy it.” She stopped, suddenly embarrassed. “Did I just say that out loud?” So many issues, from the phrasing to the anachronism to the groping she’s expressing her enjoyment of. Again, that’s a quote worth a thousand words, right there.

One of my favorite oddities, if you can call anything about this mess “favorite”, is “nugget”. The author loves this word. “Only nuggets of annoyance still holding root”. “Nuggets of hope filled Aggie.” It could be a drinking game.

Now, sometimes when I pick up a book like this I go a bit mad and expect – along with decent writing – some degree of historical accuracy. I know, I’m just crazy that way.

“Muggers. Which was exactly why he carried a pistol.” The earliest use for “muggers”, based on an etymological website which seems to be trustworthy, seems to be 1865. Which is a heck of a lot earlier than I expected – but still not 1819. Another anachronism: “Aggie tuned in and out of her aunt and uncle’s chattering”. Advanced of her to imitate a radio in 1819. Questionable phrasings, period-wise: “You need to believe me on that one.” “Why would you go there?” (Not physically go – verbally. As in a warning “Don’t go there”. ) “He did want to bust that leer off of Ferrington’s face.” (Bust a move, D. Bust a move.) “…Lemons and lemonade, dear.” (Wikipedia, and what a fantastic background for a saying: “The phrase was initially coined by Christian anarchist writer Elbert Hubbard in a 1915 obituary he penned and published for dwarf actor Marshall P. Wilder.” NINETEEN fifteen.) I sincerely hate it when a girl in these period novels uses a man’s first name far too quickly, and this book scored that square on the Awful HistRom Bingo Card™. (I really need to make that a thing. Now.)

Place names are … silly. One I’ll mention below. Another I made note of was “Clapinshire”, somehow doesn’t click. But then I came to “Charring Cross”, and maybe that makes the others make sense: it’s an alternate London, with a Charring Cross instead of Charing Cross. And radio, and muggers. And making lemonade from the lemons handed one. Yeah, that’s it. (When Amazon hands me lemons, I write long book reviews.)

The hero is … kind of an idiot. And, as per usual, kind of a jerk. (With “a very pulsating, manly bulge”. Not just pulsating – VERY pulsating.) “He already had a plan set in mind to finish off these four, but wanted to know what this woman was about.” He ponders this in the middle of a gunfight – which, as one tiny point in the book’s favor, is an example of when you ought to bring a knife to a gunfight. “He didn’t take kindly to kittens.” Meaning the heroine. Who just shot a guy. That’s hardly a kitten, bub. Because she isn’t really a kitten, he naturally assumes … well, here: “Was it possible, as bold as she was, that she was not experienced in the bedroom?” Oddly for this sort of book, I had no idea how old Aggie was supposed to be at this point, but regardless: Why would you assume otherwise about a gently brought up girl in 1819 London? He gropes “her exposed breast” in a garden – and “…He didn’t think Aggie even knew where his hand had been…” Right. Well, she is in fact a virgin – until a surprisingly rough deflowering (on a dining room table). The 1819 heroine’s reaction? “Wow”.

And that was the end for me. “Hold Your Breath”, indeed. The author may do so while waiting for me to read anything more she’s ever written.

The heroine is … undefined. I didn’t make a note of whether there’s a decent description of her, so it can’t have been too clichéd at least. Her age is indeterminate. And her height? “At average height, she was a head taller than her uncle, two heads over her aunt”… Best I can find, average height for a woman in 1800 is 5-5’2″. Let’s say, based on one source relating to figure drawing, that the head is about 1/7 the length of the figure. Call it 5’2″ (62″) divided by 7 = about 9”. Ergo, her uncle is under four and a half feet tall. Her aunt is three and a half feet tall. Huh.

One of my least favorite oddities about this thing was that, because these two were discovered in sort of flagrante in the garden, they’re whisked off to be married – a couple of days later? Would that not cause more scandal than it would avoid? I know they would be forcibly separated or forced to marry, but why, without evidence that the girl might be pregnant, would the wedding be forced so fast? “Her aunt was ferocious about keeping the wedding, if not the engagement, proper.” Proper? Really? No.

The one thing I genuinely enjoyed about the half of this book that I read was the Marquess of Southfork. It just made me happy to picture this set in Dallas in the 80’s. One line I highlighted was “Sure, she was an oddity”. See? With that use of “sure”, Texas makes sense. (Also, with the belief he was from Texas, “sure” makes sense.) Oh, and someone keeps calling the Heroine “Aggie, honey” and “Aggie, sweetie” – that’s pretty US Southern, right?

No, I lied. There was one other remark I did enjoy, though I honestly don’t know if it was meant to be as funny as it is. It had some … extraordinary curses and exclamations: “Blasted that.” Blasted. Now she was leaving?” (Funny enough, a lot of the cussing in the book was from Aggie, our genteel gentle heroine.) But this… this has promise:

“Dribble on that, Howard.”

Like Loading...
This entry was posted in books, Chick lit and tagged abandoned, dropped like a hot rock, Hold Your Breath, K.J. Jackson, romance, Stone Devil Duke. Bookmark the permalink.