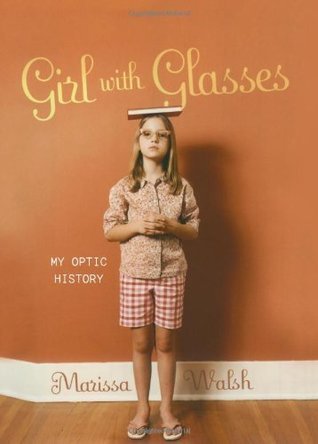 “Girl with Glasses” was not meant to be read aloud all of a piece like this. It’s a collection of essays and sketches and vignettes and lists; a few have a beginning, a middle, and an end, but more have just a beginning and a middle and left me saying “wait, what about -?” A few seemed like just beginnings that broke off. The lists were entertaining. But for the narrator – who did a very nice job overall, and to whom I would be happy to listen again – to just read this from start to finish, with little pause between essays or sections or whathaveyou, was awkward. There was one bit where it talks about how the author hired a homeless man to help her shift her luggage, which was immediately followed by a statement along the lines of “I had planned to sleep with him that night”, leaving me wondering if the homeless man was an extraordinarily talented luggage shifter. On paper (or pixels) I’m sure there were line breaks that made that make sense, but read aloud I believe there was no more than the usual sort of pause between sentences. Audiobooks have directors, right? I don’t think this director did a swell job.

This was an almost coy sort of a memoir, a tease – “I will reveal a bit, and you will expect more, and you’ll never get it”. In places (probably the places that wouldn’t result in lawsuits) there was detail; in other places no detail at all, including names (though why if she was concerned about the Bad Room-mates’ or Bus Guy’s reactions she couldn’t have just done a names-have-been-changed-to-forestall-the-litigious sort of thing, just to maintain a consistency of *using* names, I don’t really understand.). The part that irritated me most was the mention of a college relationship that never got beyond flirtatious emails, about which she wonders if glasses might have been part of the reason (along the lines of people of that age group were still learning to kiss, and kissing with glasses poses special challenges), and in the whole brief essay she is annoyingly vague, down to never using pronouns. If the person she was attracted to was a woman, why on earth not just say so? She’d already (in a roundabout way) said her first real kiss was with a woman, so…?

As what she would call a fellow GWG (Girl With Glasses) – since second grade, I don’t know how many pair without sitting and researching, and similarly having briefly worn and walked away from contact lenses – it was inevitable that I nodded a lot while listening to this, and found that “oh, you too?” sort of smile on my face quite a bit. It was a little like when I started discovering that I wasn’t the only young geek to be completely obsessed with Star Trek; it’s oddly unsettling to find that someone else has felt exactly the same thing you have. With something like the universal dilemma of “I have to pick out new frames, but I can’t see what I look like in any of these frames because I’m blind without my glasses”, or the shocking agony and terror of being sent out into the sunlight with dilated eyes. (How eyecare offices justify sending people out to drive home in that condition is beyond me. How I’ve made it home some half dozen times without dying in a fiery wreck is also beyond me. I have found there is no good meteorological situation for trying to function with dilated eyes; bright sunlight is obviously bad, but overcast or darkness is equally bad because streetlights become damn near fireworks, and oncoming headlights are twinned points of horror. And then there was that snowy evening I had to drive some ten miles to get home…) But I never really thought about anyone else eschewing contact lenses in part to avoid the sheer nakedness of not wearing this framework on my face. I hated it; I hated being able to feel wind in my eyes (car windows couldn’t be down, suddenly, no matter how warm it was); hated the exposure.

One thing where we differed a bit was in the skittish question of someone else taking off one’s glasses. She mentions it as a level of intimacy, and controlling how and when is happens (and who by). I’ve never yet met the person I’d allow the liberty. It’s only happened to me once, or nearly (I dodged back in time to avoid it), and I was never so outraged in my life by the invasiveness of it. Like the author, apparently, I am legally blind without my glasses (and wasn’t that an odd thing to be told not all that long ago), and so not having glasses means I am extremely vulnerable (and can never time travel anywhere glasses would be anachronistic, alas). For someone I barely knew to reach out to take my glasses off was tantamount to having him start unbuttoning buttons. In other words: don’t do that.

The main area where we two GWG’s differ, though, and this actually annoyed me, was when she tossed off the information that she had never lost or broken a pair of glasses. I’ve never lost a current pair (backup, yes, but not current) – for the simple reason that if I am awake they are on my face, almost without exception (and sometimes when I am not awake). By “never”, she – and I – mean “never apart from those times when they get knocked off the night table and end up taking an excruciatingly long groping time to find” – the I-need-my-glasses-to-find-my-glasses moments that punctuate my life with panic … she states that that only happened to her once. I’m not sure I buy that. It’s a bit like having a Kindle. It’s a rather expensive little apparatus (depending on the type), which becomes such a vade mecum that one becomes more careless of it than one ought. My glasses are literally always with me, and it’s easy to forget that they cost the earth (over $500, last pair). I broke my frames a few months ago – and I loved those frames; they were the first ones I ever cared about – and because I haven’t had an insurance in years that covered glasses (have I ever?) I had to wear old ones while the current lenses got put into the closest frame I could find, which have a ridiculous loud print on the earpieces… Ah well. Hopefully I’ll get a new pair this summer. But that wasn’t the first time I’ve broken a pair. It’s happened a few times – once dropped onto concrete-underlaid flooring at work; this last time carelessly left beside me in bed while mostly asleep only to be squashed in the morning. There is nothing quite like the sick feeling of holding in two hands two separate pieces of what used to be one’s glasses, and trying desperately figure out a way to jury-rig them back together (preferably without looking like an idiot), wishing desperately for Hermione to come along and say “Oculo reparo”, trying desperately to remember where the old pair are, so that one can drive to – hopefully – get them fixed, or, more likely and more expensively, replaced. (When the frame snaps at the nosepiece, the reaction to “can they be fixed?” is basically “ha ha ha no”.) She’s apparently never had to keep wearing the same glasses because of financial reasons; go her.