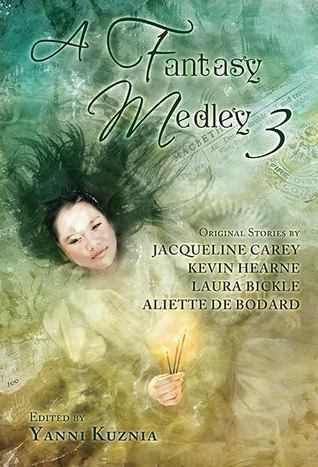 I requested A Fantasy Medley from Netgalley pretty much because of Kevin Hearne. Then Laura Bickle rang a bell as the author of The Hallowed Ones, which I liked; and then Jacqueline Carey registered as the author of Kushiel’s Dart, which was not to my taste. But, all in all, I asked for it because of the ancient Irish bloke and his dog.

The story – “Goddess at the Crossroad” – was not good. In brief: Atticus tells his apprentice the tale of that time he heard about this Shakespeare bloke and went to England to look him up, and ended up saving his life from witches. I didn’t like the tale; I didn’t like the way it was told; I didn’t like Atticus, Oberon, drunken Shakespeare, or the apprentice whose name I don’t remember. I disliked it all so much that I had to go back to my review of Hounded to verify that I actually did like it. And … I loved the dog? Really? Okay. Not this time; without his interjections and interruptions I might feel disposed to rate this higher. Based on this story I would never continue with the series. Two stars for this one.

“Ashes” by Laura Bickle is set in a very different place from The Hallowed Ones, following a pretty unique character (“Detroit arson investigator and powerful spirit medium Anya Kalinczyk” – that’s kind of awesome) as she chases down an arsenous elemental before it burns down the city. I liked it. I didn’t love it; I was uncomfortable with the main character going about consuming others’ souls; but I wouldn’t turn down more adventures with Anya and her familiar Sparky. Three and a half stars.

“The Death of Aiguillon” by Aliette de Bodard reminded me of Paula Volsky’s Illusion, taking place in the ruins of Paris – of a Paris. It’s grim and beautiful, and unpredictable, both gritty and poetic. Impressive. Four and a half stars.

Kushiel’s Dart was not my cup of tea, but I never argued with the skill of the writing – and Jacqueline Carey’s hard-edged lyricism was very much evident in “One Hundred Ablutions”. That was impressive. That was shatteringly impressive. A solid five stars.

The gentleman was very much outclassed by the ladies in this collection – but what a weird collection of stories it is. There’s no theme, no rhyme nor reason to their being together in one book except the big umbrella of “fantasy”. The first two are borderline comedic, with a talking dog and Sparky the salamander and action movie violence – urban fantasy, though the city of the Hearne story was 17th century London; the second two are elegant and dark, with violence more likely to cost a civilization, or a soul – high fantasy. I suppose one could look at it as a sort of technical overview of what the genre can include. It would be more successful at that task if all four entries were of the same level.

I received the collection from Netgalley for review.