All She Wrote – Josh Lanyon 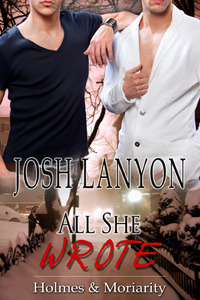 Josh Lanyon was a sort of accidental discovery, starting with an almost guilty purchase from Samhain Publishing – I just won’t tell anyone about the smut I read… But this isn’t smut. This is good stuff, a well-done cozy mystery (!) (in that the primary investigator is a mystery writer, these are cozies) with a couple of steamy (but not appallingly explicitly steamy) scenes worked in.

All She Wrote is number two in the “Holmes and Moriarity” series – and that extra “I” in Moriarity (and the way it’s handled) makes me happy, makes it less an eye-catching gimmick and more a sort of joke shared with the main characters. Christopher (Kit) Holmes is crotchety, set in his ways, fragile of confidence hiding behind a veneer of apparent arrogance, and loath to trust in good fortune since it usually comes with a sting in its tail, and I love to share his point of view. And J.X. Moriarity, the long-suffering and gorgeous… Yeah.

I enjoyed the writing, so very much. A snarky, funny first-person POV, self-deprecating – the latter masking deep, deep, bleak insecurity – and with just a hint of Lord Peteresque blather. (“He who argues with a fool is a bigger fool. Or drunk. And I was neither. I wasn’t drunk, anyway. Worse luck.”) It’s incisive and clear-sighted, and Lanyon via Kit delivers solid observation with a flair of humor (“This went beyond talent and hard work, this was gifted. This was the kind of acuity you were either born with or you weren’t. Like having perfect pitch or Brad Pitt’s cheekbones.”)

And for fun here’s a quote I would l like on my gravestone, if I have one: “Did I mention I hate driving in snow? It should go without saying.”

More wonderful quotes:
I threw a quick look back at J.X. His weary, drawn face reminded me of a young, handsome Don Quixote. I wouldn’t have been surprised to spot pieces of broken windmill scattered in the sheets around him.

He scooped up Victoria practically before she hit the ground, well within the five-second rule. If she’d been a potato chip, he could have still eaten her. Not something I particularly wanted to contemplate.

Like Loading...
This entry was posted in books, mystery and tagged All She Wrote, cozy, Josh Lanyon, m/m, mystery. Bookmark the permalink.