The Stress of Her Regard – Tim Powers – Simon Vance 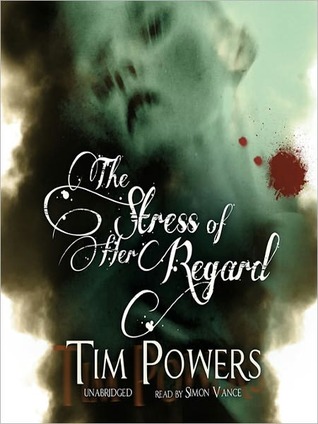 I don’t recall if I’ve read anything of Tim Powers’s before; I’ve known the name forever, though. And Simon Vance narrated, so with the description listed for The Stress of Her Regard seemed like a solid lock.

But it was so very much not.

Vampires, succubi, fairy godmothers, muses – oh, and the Sphinx – all have the same origin and explanation: lamia. Done right, this could be fascinating. Done not-quite-right, and I wanted to hurt every major character in the book, and some of the minor ones. And more than that I began to develop a deep desire to spit in the author’s eye; it’s a little off-putting that some of the best creative work of humanity is only due to the lamia. Shelley and Keats and Byron, just for starters, all owe every particle of their talent and fame to these things – things which are revolting and horrifying. (Although I would like to be able to blame vampiric 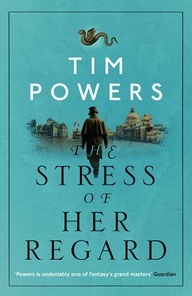 succubus creatures for the fact that Shelley screwed up the lie/lay thing in “Passage of the Apennines”. That just made me sad.

There was one good line: “Crawford blinked around at the steep streets and old houses and wondered what he was doing here, weary, fevered, and cabbage-decked” – and apart from that I fluctuated between boredom and tendencies to minor violence.

And when Lord Byron – Lord “Mad, Bad, and Dangerous To Know” – comes off as a repetitive bore (which he really, really does), that’s a serious problem. (And I’m not too sure it’s correct for him to be referred to as “the lord”. That brings to mind a whole other guy.) The whole thing took itself very, very seriously indeed. Almost all of the humor was unintentional. And the whole surreal episode on the mountaintop … phew. I was grateful when it was over.

Even Simon Vance didn’t seem too into it – he did everything possible with this, but he pronounced Byron’s “Don Juan” the way everyone says it, not the way Byron apparently meant it. I was grateful when the whole book was over.

Like Loading...
This entry was posted in books, fantasy and tagged audiobook, Byron, fantasy, Keats, Shelley, Simon Vance, The Stress of Her Regard, Tim Powers, vampires. Bookmark the permalink.