He tried to wrap his arms around the old tree and climb, but it was much too wide. He tried jumping for the lowest branch, but it was too high. In honor of the Three Bears, I let him try scaling the wall, but it was too slick. Then Goldilocks got into the action.

Okay, so I’m not a blonde. Whatevs. 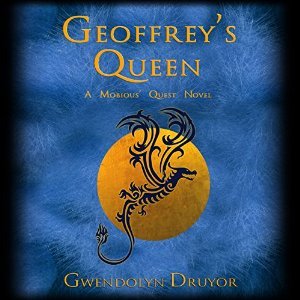 Oh, that was fun. That was so very much fun.

I confess my initial expectation for a book narrated by its author was … low. But the sample sounded good; everything sounded good. And lo: it is good.

It’s told unconventionally, with the journals of the two main characters (Geoffrey and Nanda) alternating to relate their time travel (sort of), travel between worlds – oh, and comparatively conventional travel across a fantasy landscape where most things are familiar, though quite a bit isn’t (blue blood …. ?).

At one point, Nanda uses as a simile that jarring sensation when you misjudge a staircase and expect one more step than there actually is. That’s also a valid metaphor for parts of this book. When suddenly a new name pops up, mentioned in a context that means they’ve been around for a while; or when an established character is mentioned in a context that makes no sense in relation to what has gone before; or when “past” events are mentioned before the story has been told (Wait, all of that happened FIRST?) … it’s a bit like having the ground shift under your feet. Or taking that extra step where none exists.

The timelines and storylines form a rather appropriately Celtic knot. I never have been able to juggle in real life, but I can usually keep all the balls an author throws at me up in the air… But Gwendolyn Druyor threw a bowling pin, a flaming torch, and a live fish in there, and there were times when I stopped short and said (out loud and everything), “Wait, what?” And “Who, now?” And then there was a slightly strangled “Wait, that happened first??” followed by a rapid reshuffling of the mental cards.

The good news is that the blanks are always filled in quickly, and well enough that I could assimilate the information and adapt, and … it’s worth it. With a lot of books I “fix” the things I have issues with in my head as I go along –but I honestly can’t imagine this book written any other way. It worked. It could all have gone massively, catastrophically wrong – but it really did work. (Hence the rating.)

I enjoyed the style of Geoffrey’s people’s government. (I haven’t gotten the digital edition yet, and I’m not going to try to spell the country’s name.) I never thought about government reparations in this way before: we didn’t prevent this from happening, we didn’t protect you, therefore have some money – or, here, perhaps some other form of compensation. I loved the worldbuilding: this is a deep, rich, well thought out setting. The characters are nicely well-rounded, and don’t always do what you expect them to.

And did I mention the dragons? Just when you thought you’d seen every possible variation of “large winged beastie which breathes fire”, you haven’t.

Oh, and about that author narration? Lovely. The author is an actress, and in fact has extensive experience narrating audiobooks. And after all – who is going to give just the right delivery of a line if not the person who wrote it?

Highly recommended – and my thanks to Ms. Druyor and audiobookblast.com for the book! Because “This audiobook was provided by the author, narrator, or publisher at no cost in exchange for an unbiased review courtesy of AudiobookBlast dot com.”