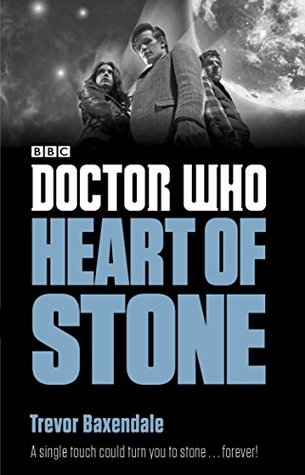 Out of the few Doctor Who novels I’ve read in the past few years, this one did the best job of capturing the feel of the show. The Doctor (#11) felt like pretty much like the Doctor; Amy and Rory felt pretty much like Amy and Rory. And Amy wasn’t nasty and unpleasant as she was in the others.

So the TARDIS lands in the pig pen of an English farm, and turns out there’s a monster on the loose – a huge man made of stone, who turns everything it touches to stone. And that’s sort of a problem with the story, because the author seems to kind of forget about that when int’s inconvenient; there’s a dog whose condition is never addressed, and also a pregnant pig. The former bothered me for obvious reasons (dog), and the latter was probably pretty important to the farm. Since both animals were specifically singled out in the writing, I was surprised their fates weren’t followed up.

When the Doctor says “Do you remember I said that the transformation was unstable, and therefore reversible?” it results in eye-rolling and and a sighed “Yes, I do, because you’ve repeated it a good half dozen times now”.

And … I’m sorry … TARDIS in pig pen. And no one comments on it – or the fact that three adults pile in and out of it on a regular basis. I know Doctor Who isn’t a model of logic and sense at the best of times – but … big blue box in a pig pen. Unusual, no? But no one raises an eyebrow. Not even the pigs.