Fly Me to the Moon – Mindy Klasky 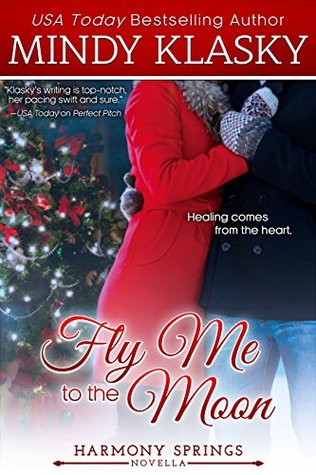 Mindy Klasky is one of those writers who plays tricks on my brain. She was on my List (the roll of authors to follow and keep track of), but I had to go check and remind myself of what it was … and when I did I was a little surprised; the Glassblower trilogy wasn’t something I adored, and yet the author’s name always rings a small, positive, bell.

Happily, Fly Me to the Moon was simple unabashed fun. I knew her from her fantasy work, but this is a contemporary romance, and a nice one. Lexi is a woman with scars, literal and metaphorical, who owns a highly improbably Christmas-themed shop in a tourist town – improbably because it’s one of those shops which abound in cozy mysteries and romances which stand about a four percent chance of survival. Who knows – maybe this is part of the four percent. Into the town comes another scarred soul, Tom Finnegan, who is just returnedfrom battle, and is in town intending to talk to the parents of a buddy killed in action. A duty which he keeps shirking. He goes into the shop looking for a gift for the buddy’s mother, and suffers the traditional fate of the bull in the china shop. Owing Lexi more than he could pay, he contracts to work for her until his debt is paid off… and until his debt of honor is paid off. And of course until he – they – figure out the connection growing between them.

It’s a strange thing; main character Lexi’s pets sounded remarkably familiar. She has a three-legged hound and a one-eyed cat – and I could swear I just recently read another book where the heroine had a three-legged dog and a disabled, if not one-eyed, cat.

There were a couple of things that irked me… Lexi was horribly burned in a house fire, and since then has never tolerated so much as a lit candle around her … yet she has a gas stove. I’ve never been burned that badly, and I’m afraid of those things. Also, she makes a decision which should have a major impact on the whole of her life through the business into which she has put so much, but never seems to think about it.

Like Loading...
This entry was posted in books and tagged Fly Me to the Moon, LTMG, Mindy Klasky, romance. Bookmark the permalink.