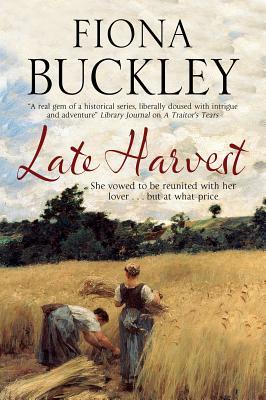 Fiona Buckley is another author who has been on my list for some time; I read some of her Elizabethan mysteries, and partly had her on the List so I could keep track of them. I didn’t quite leap at this book – a departure for her, set in the very early 1800’s – but I did perk up a little and request it without hesitation.

And it was very readable. It’s been long enough that I don’t recall what kept me from loving the Elizabeth mysteries, but they wouldn’t have been on the list if I didn’t at least enjoy spending a few hours with each one, and I certainly don’t regret the time spent on this … but … Not very far into it I made a note: quite simply, “I don’t like any of these people”. It isn’t a Wuthering Heights level of dislike for the cast of characters – just simply a mild distaste for everyone, from heroine Peggy Shawe, of Foxwell farm on Exmoor – proper-spoken and nearly twenty-one as the book begins – and her family, to James – the young man her parents want her to marry – to Ralph Duggan, the young man with whom she falls instantly and deeply in love. Terrible things happen, and Ralph’s brother has to go on the run – and because he is young and in trouble Ralph must go with him. And since true love doesn’t feed the bulldog, Peggy ends up marrying James after all. And James quickly goes from being a rather boring and colorless substitute for True Love to being … well, to go back to Wuthering Heights, he becomes a bit Heathcliff. Not in a good way. If there is a good way to be a bit Heathcliff … and I maintain that there is not. James is a nasty piece of work.

Well, no, I have to correct what I said up there – I did like one character a bit: Harriet. If you read the book you’ll see why that didn’t turn out so well.

And Love’s Young Dream, Ralph? Let me put it this way. My grandmother was named Elizabeth Duggan. I’ve never seen the name used in a book before – and I am unhappy that of all the characters in all the books I’ve read, this jerk has to be the one named Duggan.

My frustrations with this book and its characters were manifold. The stupidity of the behavior and decisions of these people … The midnight swiving that resulted in a bastard daughter made me sigh and roll my eyes, because it was so stunningly dumb, and such a disgusting move considering both of them were married, and both had children – and that Peggy quite liked Ralph’s wife. “I could have liked Harriet so much, and in another world we could have been such good friends”… Yeah, well, when you cuckold a woman it does tend to get in the way of a lasting and meaningful friendship. (Then of course some time later when the bastard daughter is sent to school to learn from her father’s wife’s brother… Really?)

There are character deaths because of these stunningly stupid decisions – “‘his ma caught her death warning her husband not to go out smuggling that night'” –and lives ruined, and while that doesn’t mean it isn’t all perfectly realistic it does make it hard to tolerate.

Like Loading...
This entry was posted in books, historical fiction and tagged Fiona Buckley, Late Harvest, NetGalley. Bookmark the permalink.