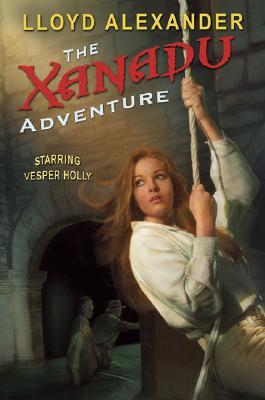 This is the only Vesper Holly I never read…

This is what pre-young-adult novels used to be. Smart, funny, with a hint of romance and lots of adventure – this is a G-rated (G-rated, do you hear me, all you writers of angels and vampires?), heroine-fronted (heroine! Legitimate heroine! Not a bimbo!) version of Indiana Jones, with an evil, evil nemesis and staunch comrades, one Watsonian down to his Victorian first-person narrative. Vesper is brilliant, beautiful, and independent. There are no vampires, no tattoos (unless one of the thug henchmen has some), no – I repeat no sex. It would have been unthinkable, for Lloyd Alexander and for the publishing world and audience. Vesper Holly does not become addicted to any illicit substances at any point in her travels; she does not make a fool of herself over a mysterious stranger, paranormal or otherwise; she does not at any time angst over what she is wearing or her social life – such behavior would be completely alien to her. At no time does she do something stupid just to forward the plot – and one of the lovely things about this book in particular and the Vesper Holly adventures in general, and Lloyd Alexander’s work in even more general, is that no one else does either. The Vesper Hollys are written for intelligent children, to entertain greatly and teach a little bit (I know as a member of the target audience I would have sought out “Kubla Khan” – if I hadn’t already learned parts of it off by heart because of Beauty and the Beast) and overall provide cracking good reads.

The garbage known as the “Twilight saga” is, I think, aimed at a slightly older audience than Vesper Holly – but only slightly. I know my nieces read it when it all first started coming out, and the whole thing horrifies me. Not to turn this into an anti-Twilight tirade, but the writing was bad, I recall little intentional humor in the one book I read, the relationships were inappropriate … and the vampires sparkled. *shudder* Lloyd Alexander’s books present excellent writing, genuine humor, and a strong, intelligent, independent heroine who would, I have absolutely no doubt, hold Bella in the utmost contempt.

Xanadu wrapped up the series, rather neatly – although I have a suspicion that Mr. Alexander left himself a corner folded up so that he could add one more book if he’d felt the urge.

Like Loading...
This entry was posted in books, Children's/YA and tagged Lloyd Alexander, The Xanadu Adventure, Vesper Holly. Bookmark the permalink.