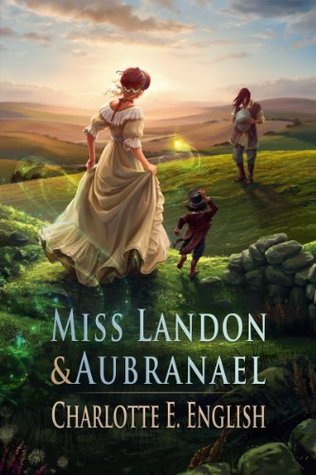 Miss Landon and Aubranael fell through the cracks, and I regret that. I read it – quite a while ago, in fact – and I enjoyed it – very much, in fact. But somehow I never wrote a word of a review, despite the fact that I received it through LibraryThing’s Member Giveaway.

It takes place in a really lovely fairy tale-esque world, in which Miss Landon (Sophy) is the only one who can see her friends Balligumph the Troll and Thundigle the Brownie. She has been having a difficult time, and an attempt to cheer her up by Balligumph goes a little off-kilter when she finds herself (to her surprise) in Faerie, which has hazards she had never anticipated. And there she meets Aubraneal, and Felebre his feline(ish) companion, and while it’s not quite love at first sight it’s pretty darn close. But she has to return to her own Austen-esque place … and when Aubraneal takes an opportunity to follow her there in disguise, lessons are learned and love is earned.

It’s a charming story, with a different flavor of elfland and of a place like Regency era England but not quite. I loved it – and I really am sorry it took this long to find and post a review.

A quote I saved:
She felt that she had been deluding herself for years; hiding from the truths she did not wish to think about, setting them aside in favour of finding some little enjoyment, some small piece of comfort in her life; setting herself up, in short, for the terrible predicament in which she now found herself. But it had not been in her power to do very much more than she had.

Like Loading...
This entry was posted in books, fantasy and tagged Charlotte E. English, fantasy, LTMG, Miss Landon and Aubranael. Bookmark the permalink.