The Forgotten Sister by Jennifer Paynter 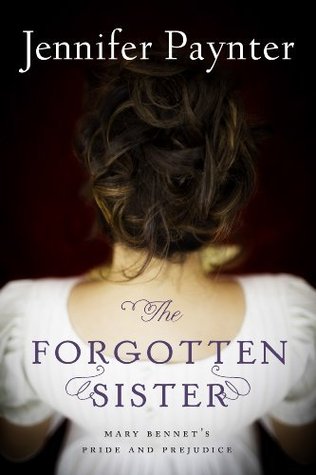 What an odd book. It’s a truth universally etc. etc. that Jane Austen continuations and retellings are hit or miss – mostly miss – and heaven knows that Pride & Prejudice especially has been told from every point of view except the horse that draws the Bennets’ gig. I was intrigued by this one because it focuses on the forgotten sister: Mary. Come on, Goodreaders, admit it – we all want to be Lizzie or Jane, but when you get right down to it how many of us are probably more Mary than we’d like to admit? Poor Mary, inept and mocked. I wanted to see the story from her point of view.

This… was not what I expected. It begins with a childhood filled with “there’s something wrong with that girl”, doctors and Edwardian psychological treatments that might as well have been medieval (s&m therapy: “and he moved to dripping hot wax onto my palms in the hope that the pain thus caused would distract me from the pain within my mind”).

In this story there is yet another girl victimized by Wickham, to whom Elizabeth et al are oblivious because of their focus on their own dramas. The problem with that is that it means yet another person knows what Wickham is and does nothing, so what happens with Lydia actually manages to be even worse. (And then of course Mary blames Elizabeth, and just lost any sympathy I might have scraped up for her.)

Elizabeth does not come off well in this telling. “She did not like people to know how hard she worked, either at her music or her Italian, and would turn away compliments with self-deprecating humor” – she spends hours practicing, then lies about it to make herself look more gifted? That’s terrible.

The author has to go through some calisthenics to bend the story to Mary’s point of view. After all, quite a bit of the tale involves only Elizabeth and Jane, or Elizabeth and Darcy. But Lizzy carelessly puts Darcy’s letter in a book, and Mary finds it.And all of the extra passages – about Edwardian psychiatric treatment, and where Mary ends up in the end … it wasn’t credible. Pity.

Like Loading...
This entry was posted in books and tagged fan-fiction, Jane Austen takeoff, Jennifer Paynter, The Forgotten Sister. Bookmark the permalink.