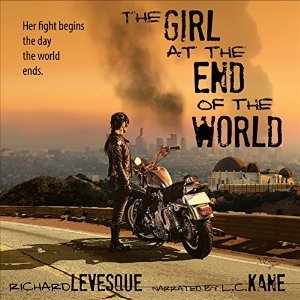 So, this one is a zombie apocalypse novel struggling to not be a zombie apocalypse novel; instead of some horrific virus transmitted via bites or scratches, this zombie–ism comes from horrific plant–like stalks that erupt from the the eye socket of an infected person and then blow out a cloud of spores. Breathe the spores, get infected, go crazy and attack people and generally freak out, and then die when stalks blast out of your own sinuses…

Unless you’re the “girl at the end of the world”, newly fifteen–year–old Scarlett, who turns out to be immune. Literally everyone around her winds up dead, and she has to fend for herself. And this is the part that just didn’t feel entirely believable.

It’s told in the first person, and often the language is a little too clinical – Scarlett talks about about fixating and compartmentalizing and so on, quite a few things I’m pretty sure are outside the scope of knowledge for a barely–fifteen–year–old who doesn’t seem to have been blooming into a psychology–focused Doogie Howser. She also puts forward a thoughtful and logical reason why she doesn’t go door to door and release the housepets that she can often hear, that she knows are starving to death (or will once they eat their owners) – and, once again, I just didn’t buy it. I don’t think I would have been that logical at that age; I kind of hope not. No, when I was fifteen, I didn’t know from psychology or cool reason: I would have been full on weeping oh my God the puppies and busting open doors and windows right and left. And actually I think it would have been more interesting – and gut–wrenching – for Scarlett to have done just this … to learn the hard way why this might not be a great idea. 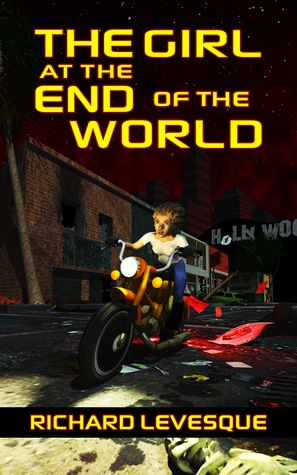 And then there’s the zoo. See, there’s not a thing the girl can do about the people, but those pets, and the animals trapped in the zoo? I couldn’t ignore them now, much less at fifteen. Maybe I’m still a little prone to weeping over the puppies. (Who am I kidding? I lost my dog last year – I have trouble making it through a kibble commercial.)

One thought which impacted my belief in the book, in a young girl’s POV as written by an adult man: a fifteen–year–old girl from America’s suburbs would absolutely, completely, and utterly be thinking about where and how she would be relieving herself after the water supply terminated. Which led to the idea that she would also be thinking about how to handle her period. Which led to the thought of whether she was taking showers. Which led to the thought that, if not, she would have grown uncomfortable and a little disgusted with herself, after a (brief) life of probably bathing daily. Which led back to the thought I’d had while listening that she absolutely, completely, and utterly would have taken more clothing to begin with – her favorite jeans, that sweater she loved. (I’m not even going to get into other things like maybe the teddy bear she grew up with or the necklace her mother gave her or family photos…) Or looked for her friend Jen’s stuff. Otherwise, there’s no earthly reason why she didn’t find herself as many changes of clothing as she could want. (Why didn’t she thoroughly search some of those Beverly Hills mansions not too far away? Seems like a great place to find some necessities, not to mention luxuries.)

Smart: Scarlett finds a trail bike, and uses that to get past all the post–apocalyptic roadblocks. Maybe a little too smart: how does she get gas for the bike? As I recall, she was nowhere near getting her driver’s license; she never had to fill a gas tank in her life, and now she needs to siphon others’ tanks.

Also not quite believable is that Scarlett’s story begins when her father takes her to a Dodgers game for her birthday, and that’s where they come almost face to face with an early victim. It gets ugly, and the place is evacuated … and I’m sorry, there’s no way they would have gotten out of Dodger Stadium that quickly and easily, and then out of the parking lot with just as little difficulty. You can’t get out of a local theatre that easily; I’ve never been to Dodger Stadium, but I’m pretty confident it’s more challenging than the Oakdale Theatre.

And I could be wrong, but isn’t it an odd sort of parasitical fungus that kills 99.9% of its hosts?

Some of Scarlett’s thought processes do seem reasonable for her age and background; she does fairly well for a moderately intelligent teen, but doesn’t perform like a Navy Seal. Her reasoning is not flawless. For example, she regrets not having lit a signal fire, just in case there’s another survivor out there … but how would that be useful when much of the city is on fire?

This was an audiobook, and not a highly successful one for me. At one point Scarlett reaches Australia by radio, and the Aussie accent is dreadful. There is a strange cadence to the narration. Something that simply did not work in audio, but which wasn’t really anyone’s fault, was the use of homonyms for “stalk”, the thing that bursts out of a person’s eyeball: “standing stock still” “to stalk me”… I wonder if it was at all intentional.

When Scarlett meets other survivors, things get complicated … and, to be honest, it began to lose my interest a bit. In keeping with her excessive maturity, she is hyper–suspicious upon meeting a young man, the first live human she’s seen quite a little while – and I don’t know if that was the right reaction. She winds up trapped with this boy and an older woman who speaks only Spanish, and they seem to make no effort to try to talk to this woman for a ridiculously long time. I would hope that the same bleeding heart that would make me go free all the trapped puppies (and kittens and birds and hamsters) would make me try to break the language barrier, somehow; everyone knows a handful of words of Spanish, and surely Dolores knows a smattering of English? Anyway. It goes from Scarlett alone to Scarlett and a tiny handful of survivors, to Scarlett and company in a to–me much less interesting setting …

I don’t know. It wasn’t the worst thing I’ve ever read, but it wasn’t what it could have been, and it just didn’t ring true in several areas. Maybe Stephen King ruined me for this sort of story.

Like Loading...
This entry was posted in books, Children's/YA and tagged audiobook, LC Kane, post-apocalyptic, Richard Levesque, The Girl at the End of the World. Bookmark the permalink.